Cyclists in UK to Cries Freedom, Justice and Equality in Support to Palestinians

Swerving between black cabs, skimming past red buses, and twisting and turning between cars and lorries on the old streets of London, cyclists are... 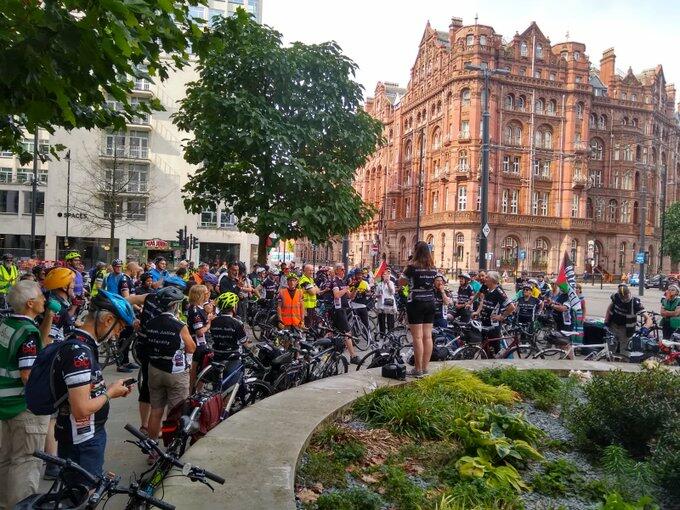 Swerving between black cabs, skimming past red buses, and twisting and turning between cars and lorries on the old streets of London, cyclists are now a staple sight of everyday life in the British capital.

But on one sun-drenched day in July, Londoners from the west to the east of the city stood aside on pavements with eyes wide open and camera-phones out.

A large but very different pack of cyclists was riding past.  A peloton of dozens of riders; men and women of a myriad of backgrounds and ages. Many wore black sweatshirts with the words “Freedom, Justice, Equality” emblazoned across their chests.

Above the grating hubbub of traffic and the gliding of wheels and gears, the people of the capital heard the air fill with the fluttering sound of hundreds of Palestinian flags waving from the rear of each bike.

That July day saw the start of the Big Ride for Palestine, an annual event that raises money for a charity helping Palestinians struggling with life under siege.

In London, cyclists kicked off the event on July 27 by riding 36 miles across the capital. The distance was chosen to symbolise Gaza’s perimeter with Israel.

Almost a week later in Manchester on August 3, riders cycled 44 miles to signify the strip’s perimeter with Egypt. Both borders remain highly militarised and almost entirely shut as the air, sea and land blockade of Gaza enters its twelfth year.

Above all, organisers of the Big Ride were hugely encouraged by people’s reception of both events.

“The atmosphere was fantastic,” Ellen Logan, an organiser of the event, told The New Arab. “Cycling alongside hundreds of other people who share the same desire to raise awareness of the occupation of Palestine is inspiring.

“The reception of people who see us go past tends to be a combination of curiosity and solidarity.”

For Logan, the event represents a different type of activism that tries to raise public awareness of the human rights abuses suffered by Palestinians.

“The Big Ride for Palestine is an alternative form of direct action,” she told The New Arab. “It combines a love of cycling with solidarity with Palestine and aims to raise awareness of the illegal occupation of Palestine in an innovative way.”

Now in its fifth year, the event continues to become more and more popular. This year the number of cyclists participating doubled from the 200 who took part in 2018, and included athletes from Palestine.

“This year we will have over 400 people cycling in London and Manchester,” Logan said. “We have had Palestinian sports people like Mohamma Alqadi and Mahmoud Sarsak actually take part in the rides.”

The Big Ride is now a well-recognised event in the UK’s expression of support for Palestinians.

“It has become one of the key UK Palestine-solidarity events and has received support from the Palestinian Embassy to the UK,” Logan said. “The Palestinian Ambassador to the UK released a video showing his support for the ride.”

The event was also supported by a number of UK-based campaign organisations, including Palestine Solidarity Campaign, War on Want, Jews for Justice for Palestinians and Campaign Against Arms Trade.

Established in 1988, MECA has supported Palestinian community projects to help meet children’s basic needs, and offer them opportunities for play, learning and a brighter future.

This year, cyclists added over £5,000 in their contribution to the charity, all of which will go toward the purchase of sports equipment for healing and rehabilitation of injured Palestinians.

The charity’s work has been praised internationally, with renowned professor and activist Noam Chomsky describing their efforts as “incredible, courageous work of enormous significance for major problems”.

At just 362 square kilometres in size and with a population of some two million, the Gaza Strip is one of the world’s most densely populated areas.

More than 40 per cent of Gazans are under 15 years of age.  With life for so many hundreds of thousands of children a daily struggle, organisers of The Big Ride chose especially to focus on Gazan children’s plight.

“With every mile they cycle, those participating in The Big Ride are protesting against 72 years of Israeli ethnic cleansing of Palestinians,” Mona El Farra, Gaza director of MECA, said in a statement.

“They are sending a message to the Palestinian people, and to the people of Gaza in particular, that they are not abandoned,” El Farra said.

“They are bringing hope to millions of Palestinian children for whom life has been scarred by trauma and fear – we greatly appreciate and salute this act of solidarity.”

After occupying Gaza for 38 years, Israel unilaterally withdrew in 2005.

It soon afterwards imposed a land, air and sea blockade claiming these as necessary defensive measures against the strip’s Hamas-led government and their occasional firing of crude rockets into Israel.

Israeli military offensives since 2008 led to thousands of deaths in Gaza and the destruction of major urban infrastructure.

Reconstruction efforts remain highly hampered due to the blockade. The only entrance to Gaza not controlled by Israel is at Rafah on the Egyptian border. This too has been almost completely closed since 2013.

From March 2018, the heavily fortified border between Israel and Gaza has seen weekly Palestinian protests, many of which have turned deadly.

The stifling blockade of Gaza has led human rights activists refer to the strip as the world’s largest open-air prison.

Lacking natural resources, the Gaza Strip suffers from a chronic shortage of water, electricity and petrol.

More than two-thirds of the population depends on humanitarian aid.

“I’ve witnessed the daily oppression of the Palestinian people; the discrimination, the violence, the inhumanity of the situation,” Logan said.

“I returned wanting to get involved in something that highlighted the appalling apartheid practices I saw, and that’s why I’m part of The Big Ride,” she said.

“We are reaching a lot of people and raising crucial awareness of the injustices that Palestinians face on a daily basis.”