Controversial testosterone rule for female athletes could be ‘unscientific’, experts warn as Olympic runner Caster Semenya challenges it in court The International Association of...

Controversial testosterone rule for female athletes could be ‘unscientific’, experts warn as Olympic runner Caster Semenya challenges it in court

A rule to limit testosterone levels in female athletes would be an ‘unscientific’ way of trying to level the field, experts have warned.

The International Association of Athletics Federations (IAAF) is planning to introduce a new limit amid a raging debate about how transgender women should compete.

But two scientists argue a person’s sex is not determined solely by the amount of testosterone – the male sex hormone – in their body.

They warn focusing on this could overlook other genetic advantages of men, and that there is some crossover in the varying testosterone levels among athletes.

Another expert added the ruling appears to be ‘personal’ and unfairly targeted at champion runner Caster Semenya, who is intersex and has challenged the rule in court. 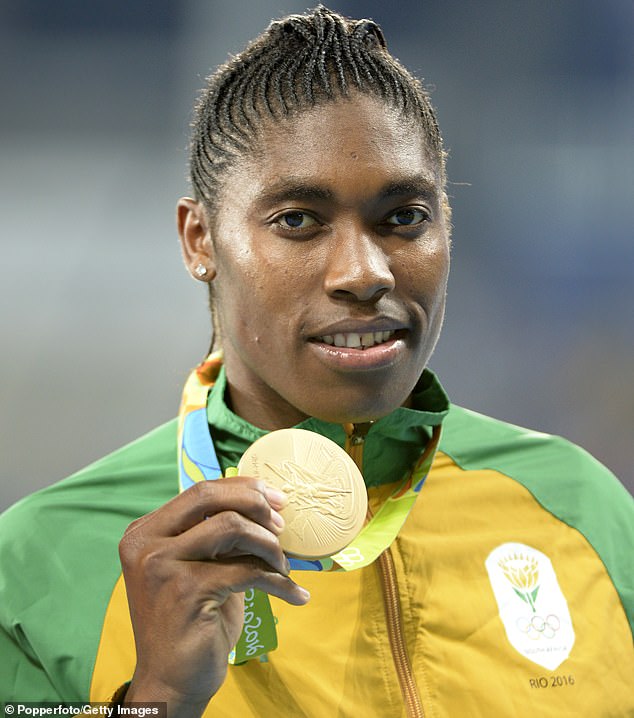 Runner Caster Semenya, 28, was subjected to a sex test when people claimed she was a man after testing found higher than usual levels of testosterone in her blood. She was temporarily banned from competing as a woman but has since been allowed to return

The IAAF’s proposed rule has been postponed after the legal challenge from South African Ms Semenya, who has been banned from competing before.

She was found to have testosterone levels above the female threshold – at the time the IAAF limit was 10nmol/L – and was subjected to a sex verification test.

She is believed to be intersex, meaning she is biologically both sexes – she is said to be a woman but have no womb or ovaries but internal testicles instead.

The testosterone issue also involves transgender athletes, with concerns about biological men competing as women without having sex-change surgery.

Currently it is possible for trans athletes to compete while taking hormonal therapy to reduce their testosterone levels but to still have male sex organs.

Among track and field elite athletes, they said, there is known to be a crossover between men with low levels and women with high levels.

Under new IAAF rules, women will not be allowed to compete in running races if they have more than 5nmol/L of testosterone in their blood.

Martina Navratilova has said it is unfair that a transgender woman can compete as a female by just lowering testosterone levels with drugs and that they do not need to have sex-change surgery. She said: ‘It’s insane and it’s cheating’

Those who do, and qualify as female or intersex, will have to use hormonal drugs to lower their testosterone.

But Dr Tannenbaum and Dr Bekker said a link between testosterone levels and medal-winning ability has never been proven.

And they say there are other ways women could have biological advantages even if their testosterone levels are within the limit – although these are not explained.

Two high profile cases of women competing with claimed biological advantages have been those of the runner Mokgadi Caster Semenya, and Rachel McKinnon.

Caster Semenya, 28, was banned from running for almost a year in 2009 after being found to have higher than usual levels of testosterone in her body.

Critics claimed she was a man which led to her being subjected to a sex test.

The results were never published but are believed to have shown she was born with both female and male biology.

She was allowed to return to competition as a woman and has won Commonwealth and Olympic gold medals since.

Rachel McKinnon, a transgender cyclist from Canada, in October became the first trans woman to win a world cycling championship.

Although Dr McKinnon, 35, transitioned from male to female when she was 29, she still has male sexual organs and was criticised last year for being noticeably larger than her cycling opponents.

In her defence she tweeted recently: ‘There is no debate to be had over whether trans women athletes have an unfair advantage: it’s clear that they don’t.

‘Since the Nov 2003 IOC policy openly allowing trans women to compete, not a single trans athlete has even qualified for the Olympics, let alone won a medal.’

‘In the meantime, complacence around the IAAF 2018 testosterone regulation for women with differences of sex development risks setting an unscientific precedent for other cases of genetic advantage,’ they wrote.

Professor Peter Sonksen, a hormone expert from King’s College and the University of Southampton, said: ‘I don’t believe the new proposed rule of the IAAF is “fit for purpose”.

‘It is not compatible with the science behind the issues and greatly overestimates the role of endogenous testosterone. It is also personal and unfairly targets a brilliant athlete.’

He refers to Ms Semenya, who has mounted a challenge over whether the IAAF’s proposed rule is legal. A court is expected to rule by March 26.

After this the organisation will make its decision, which would affect track and field athletes who have ‘differences of sex development’.

But Professor Chris Cooper, from the University of Essex, said trying to fine-tine the science of gender was not the best direction in which to head.

He said: ‘The IAAF regulations have as good a scientific basis that they are going to get in the foreseeable future.

‘However, this does not mean that they are ethically “right”. That is a separate matter.’

And he added: ‘We should focus on the ethics of what we want to encourage as participation in female sport, and not get hung up on criticising the fine details of science that is never going to be as conclusive as we would like.’

The rule change would also include transgender athletes, who have come under fire in the media in recent weeks.

Former tennis player Martina Navratilova said men who have not had sex change surgery but compete as women are ‘cheating’.

She made the comment in the Sunday Times recently, when she wrote: ‘To put my argument at its most basic: a man can decide to be female, take hormones if required by whatever sporting organisation, win everything in sight and perhaps earn a small fortune, and then reverse his decision and go back to making babies. It’s insane and it’s cheating.’

Ms Navratilova has in the past argued with the Canadian cyclist Rachel McKinnon, who was last year the first transgender woman to win a world championship.

Dr McKinnon, 35, transitioned at the age of 29 but still has male sex organs. 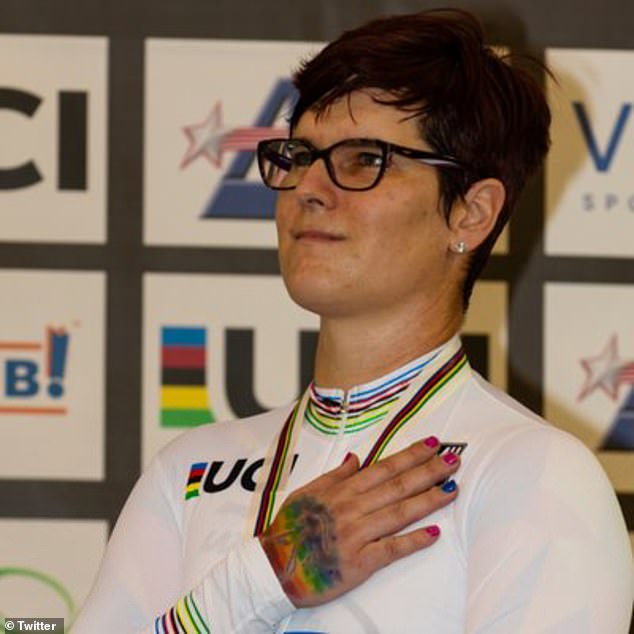 Rachel McKinnon, 35, became the first transgender woman to win a world cycling championship after she transitioned from male to female when she was 29 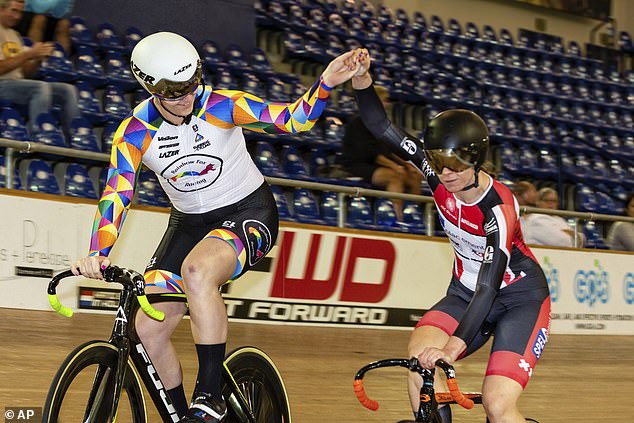 Dr McKinnon, pictured left, transitioned from male to female when she was 29 but still has male sex organs. She caused controversy after winning the women’s world title for her age group last year against noticeably smaller opponents

She tweeted this month: ‘There is no debate to be had over whether trans women athletes have an unfair advantage: it’s clear that they don’t.

‘Since the Nov 2003 IOC policy openly allowing trans women to compete, not a single trans athlete has even qualified for the Olympics, let alone won a medal.’

Elite runners Dame Kelly Holmes and Paula Radcliffe, and swimmer Sharron Davies said this week they will write to the International Olympic Committee to make sure there are fair competition rules for women.

Ms Radcliffe said lax rules could lead to sport being ‘manipulated’ and has questioned whether it is ‘fair for a biological man to compete alongside women’, the BBC reported.