Commemoration of the Failed Coup Attempt in Turkey

Government crackdown on opponents continues, with journalists, academics being targeted A stage and streams of flags have been put up in Istanbul’s Taksim Square,... 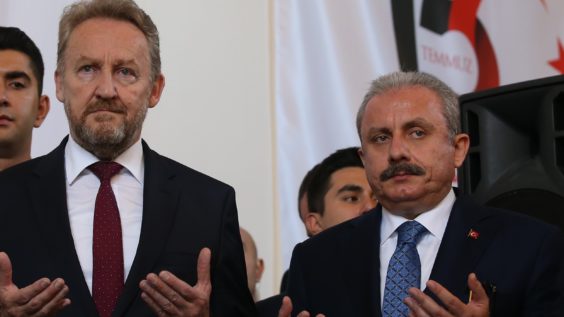 Government crackdown on opponents continues, with journalists, academics being targeted

A stage and streams of flags have been put up in Istanbul’s Taksim Square, in the heart of Istanbul, in advance of Monday evening’s marking of the third anniversary of Turkey’s 2016 coup attempt.

On the other side of the Bosporus waterway, which divides the Asian and European sections of the city, municipal workers put finishing touches on monuments erected next to Martyr’s Bridge, named after civilians who lost their lives fighting pro-coup forces.

At least 250 people died during the July 15 coup attempt, which was squelched by the next morning.

Turkey blames cleric Fethullah Gulen, who has been living in self-imposed exile in Pennsylvania since 1999, for masterminding the coup, a charge he denies.

In the aftermath, 77,000 people were jailed and 150,000 government employees fired or suspended in a widespread crackdown that included civil servants, judges and police officers.

So, while Turkish President Recep Tayyip Erdogan’s supporters prepare to solemnly commemorate his quashing of the coup attempt, his critics charge him with using it as an excuse to silence his opponents.

Academics who signed a petition addressed to the government criticizing the military have been fired and charged with supporting terrorism. A Turkish businessman, Osman Kavla, has been behind bars for 19 months, accused of having financed the 2013 Gezi Park protests – which began as a wave of rallies against development in the park but grew into demonstrations against Erodogan’s administration – and trying to overthrow the government.

Journalists have also been frequent targets of the continuing crackdown.

The government says it had to react swiftly because of risks to state security, which they said went beyond a coup attempt. Turkey had also experienced attacks by Islamic State and was facing a decades-long insurgency by the Kurdish Workers’ Party (PKK), a militant group that Turkey, the US and the EU label a terrorist organization.

Fatih Polat, chief editor of the daily newspaper Evrensel, recalled how following the coup attempt, he was working on the paper’s next edition in the newsroom when police came to shut down a television channel linked to the outlet. He said while oppression of journalists has existed for a long time in the country, it has become worse since the failed coup.

“It’s a minefield; if you’re not careful, you may lose a leg,” Polat said, invoking a Turkish proverb.

Ozgur Ogret, Turkey’s representative to the Committee to Protect Journalists, told The Media Line that more than 100 news outlets have been closed down since the coup attempt. Some of these organizations were never connected to people or groups the government accuses of being behind the putsch, he noted.

“Turkey has lost many of its dissident voices,” Ogret said. “Since the coup attempt, Turkish media has lost many outlets…. Turkey is poorer in terms of freedom of expression.”

The Foundation for Political, Economic and Social Research (SETA), a Turkish think tank with strong links to the government, recently published a report detailing foreign news outlets that operate in the country. The report listed the outlets’ Turkish employees and included their social media posts.

Last month, prosecutors accused two journalists from the business-news outlet Bloomberg of trying to undermine the country’s economic stability with an August 2018 article about the crisis facing the country’s currency, which went into a free-fall amid a diplomatic row with Washington.

There are some signs of hope, however, amid the constant stream of bleak news for journalists.

Earlier this month, a court overturned life sentences for three journalists who were put behind bars soon after the coup attempt.

In March, two German journalists left Turkey after not having their accreditation renewed. However, they were eventually given press cards after the German foreign minister stated that the situation was unacceptable.

“Today, we notice that when EU members become vocal, the problem [for the journalist] is, in a way, solved,” Erol Onderoglu of Reporters Without Borders Turkey, told The Media Line.

Onderoglu himself is currently on trial, facing up to seven years in prison on charges of spreading terrorist propaganda after he helped edit a Kurdish newspaper that was facing pressure from authorities. He was detained a month before the coup attempt. His verdict is expected on Wednesday.

Press accreditation has been an especially contentious issue, as it is now issued by the president’s office, putting control over a journalist’s freedom to work and level of access in the hands of the same government that journalists are supposed to critically report on.

While the topic has grabbed the attention of foreign journalists because accreditation allows them to remain in the country, local journalists also face major obstacles in obtaining press cards.