Come and Visit the Most Storied Sites of Ancient Greece

While many countries still bare traces of the ancient civilizations they once fostered, in Greece, antiquity can feel especially tangible. “It’s the absence of...

While many countries still bare traces of the ancient civilizations they once fostered, in Greece, antiquity can feel especially tangible. “It’s the absence of modern developments — of high-rises and high-speed technologies — that can make you feel as if you’re walking among the ancient philosophers and tragedians who gave us our sense of hubris and catharsis,” writes Pico Iyer in his story for T’s spring Travel issue, for which he journeyed to some of the country’s most storied classical sites. Retracing a route he’d traveled some 35 years before, Iyer made his way from the sprawling metropolis of Athens to the ancient city of Mycenae and the sacred sanctuary at Epidaurus, then on to the sleepy port town of Nafplio and finally to Ithaca, the island Odysseus reputedly called home. Here, a practical guide to making a similar pilgrimage across the Peloponnese, with ideas for where to stay and what to eat and drink.

[Coming later this spring: the T List newsletter, a weekly roundup of what T Magazine editors are noticing and coveting. Sign up here.]

Any journey through Greece begins in the country’s capital. Steeped in tradition — archaeological remains suggest the site has been inhabited since the Neolithic period — Athens is both embracing and redefining its roots. Beyond its famous classical sites like the fifth-century B.C. ruins of the Acropolis and the Parthenon — which are best viewed in the morning when the crowds are at bay — the city is ushering in a new era. Following almost 10 years of unrest because of the country’s ruinous debt crisis, Athens is reinventing itself as a hub for contemporary culture. Palatial hotels offer a glimpse into the city’s storied past, while a revitalized waterfront district refreshes the longstanding Greek concept of the agora, with modern Greek restaurants and grand plazas offering new venues for cultural development.

Built in 1874 in the city’s central Syntagma Square, this 320-room grande dame is a shrine to Old World opulence. Beyond the marble-tiled lobby with its white columns and gilded mirrors is the property’s courtyard garden and stately Alexander’s Cigar Lounge and Bar, where an 18th-century tapestry of Alexander the Great hangs above the marble bar. The property’s rooms feature restored antique interiors, accented with oil paintings and ornate porcelain vases, while the rooftop restaurant offers sweeping views of the Acropolis, Lycabettus Hill and the original Olympic Stadium — as well as modern Mediterranean dishes such as Black Angus beef carpaccio topped with a quail egg and homemade goat cheese ravioli.

This 50-acre cultural complex — which houses the National Library of Greece, the Greek National Opera and Stavros Niarchos Park, one of the largest green spaces in the city — has revitalized the formerly derelict Faliro Delta waterfront in the industrial Kallithea neighborhood. The $750 million center was designed by Renzo Piano to reflect the community ethos of an ancient Greek agora; Piano raised the land to create a sloping park with shaded gardens, grand plazas and views of the sea and the Acropolis. The center is free to the public and hosts a wide-ranging program of cultural and recreational events, from live jazz performances to kayaking and sailing lessons.

After opening a glamorous seaside restaurant on her native Paros, the chef Argiro Barbarigou took her beloved seafood concept to the Kolonaki neighborhood in Athens in 1996. Named in tribute to her father, Papadakis showcases the country’s revered cuisine by enhancing simple but flavorful Greek ingredients with modern techniques to form subtly decadent dishes. Set in the foothills of Mount Lycabettus, the white-tablecloth restaurant demonstrates why Barbarigou is considered the godmother of contemporary Greek cuisine. She serves plates including organic chickpeas that have been slow roasted for 15 hours, creamy orzo served with langoustines and prawns and handmade cheese-stuffed caper leaves sourced from her brother-in-law’s farm on Paros.

Every Sunday morning, in a less-trodden commercial area of the city near the Acropolis, vintage shoppers forgo the typical tourist shops to scour the many palaiopoleia, or stalls, of this dusty antique flea market. Located south of the pedestrian Ermou Street and north of the Temple of Hephaestus near Plateia Avyssinias, the weekly flea market, with its array of curios and trinkets, represents the diverse culture of Athens. Vendors hawk everything from traditional jewelry and collectible coins to Ottoman glassware and vintage Fornasetti vases.

Some 80 miles west of Athens, in the heart of the Peloponnese, Nafplio is the archetypal Grecian seaside town: a warren of cobblestone streets — punctuated by Byzantine-era Ottoman fountains and neo-Classical Venetian mansions — leading down to a bustling port. Presiding over the town, the Palamidi fortress, an 18th-century citadel built on a rocky outcrop, is accessible by either a challenging hike up a nearly 1,000-step stone staircase or a short scenic drive. Alternatively, visitors can spend the day lounging on the long golden-sand Karathona Beach or diving from the low cliffs at Arvanitia Beach. But the town is also a perfect base from which to visit some of Greece’s best-preserved classical sites, from Mycenae, Agamemnon’s fabled kingdom, less than 30 minutes north, to the ancient healing center of Asklepios and the theater of Epidaurus, an hour to the east.

On the glassy bay of Nafplio, set below the Palamidi fortress, this restored boutique hotel is the first of its kind in the city, a contemporary respite in contrast to the town’s typical neo-Classical style. The 43 rooms and two suites feature airy bedrooms and living spaces with natural-wood accents and sweeping views of the town’s cobblestone promenade, where wooden fishing boats bob in the Aegean Sea before the Venetian Bourtzi castle on the rocky islet of Agioi Theodoroi. Circle Restaurant, which has an intimate veranda, serves Greek-Mediterranean fare like creamy shrimp and king crab bisque and red-wine-marinated wild boar, while the Onyx Bar offers local Nemean wine.

This family-run distillery, located on a private estate near the Palamidi castle, has been an institution in Nafplio for over 145 years. The fourth- and fifth-generation father-son owners, Fotis and Yiannis Karonis, are famous for distilling ouzo, a grape-based dry aperitif with aromas of star anise, coriander and fennel that is best enjoyed over ice. Visitors to the distillery can tour a small museum to learn how the family produces its mainstay spirit as well as sample specialty liqueurs made with regional ingredients such as sour cherries from Arcadia and resin collected from mastic trees on the island of Chios.

Named after the Greek word for smokestack, this former industrial cannery is now a vibrant cultural center that hosts art exhibitions and an annual jazz festival. In the summer months, the central plaza is fragrant with lavender, rosemary and jasmine, and families gather to play chess and dine at the indoor-outdoor cafe. The restaurant is shaded by mulberry and acacia trees and offers seasonal Greek-Mediterranean fare like grilled mastelo cheese from Chios with cherry tomatoes and basil and homemade seashell-shaped Greek gogges pasta cooked in brown butter, sage and salted dry ricotta cheese.

Located 15 miles east of Nafplio, on the southeast end of the ancient healing center of Asklepios, this fourth-century B.C. monument is one of the best-preserved classical theaters in Greece. With symmetrical proportions and unmatched acoustics — any sound on the open-air stage, whether a howl or a whisper, can be heard perfectly in any seat in the 55 stone rows — this ancient architectural masterpiece was the site of the first staged plays of some of the country’s most prolific playwrights, including Sophocles, and still functions as a working theater when it hosts up to 12,000 attendees per performance at the annual Athens and Epidaurus Festival from June to August each summer.

Situated outside Nafplio and regaled as the kingdom of the mythical king Agamemnon in Homer’s epic poems the “Iliad” and the “Odyssey,” this late Bronze Age citadel, constructed between the 14th and 13th centuries B.C., was once home to the Mycenaean civilization, one of the most advanced cultures in ancient Greece. The fortified site, set strategically between two hills in the Argolid plain in the northeastern Peloponnese, features monumental architecture, including massive defense walls and the ornate Lion Gate entrance, a structure formed by four stone blocks and framed by two heraldic lions believed to have originally been cast in bronze.

Off the west coast of mainland Greece in the Ionian Sea, and accessible by a one-hour flight from Athens or a four-hour ferry ride from the port town of Kyllini in the western Peloponnese, this small, picturesque island is where Odysseus is said to have reigned. Today, the boutique Perantzada Hotel, housed in an opulent neo-Classical mansion, provides the perfect base to explore the island’s wild natural landscape, from tucked-away bays with white-pebble beaches and crystalline waters to forested trekking paths, as well as its sequestered villages and ancient ruins. In the island’s main port city, Vathy, bustling markets and a lively beach promenade provide just enough activity.

Located in the sheltered bay of Vathy, this 17-room boutique hotel occupies a lavish 19th-century mansion whose lantern-lined terraces provide ideal nooks from which to enjoy the island’s spectacular sunsets. Cooled by the gentle breezes of the Ionian Sea, each of the airy suites features belle epoque furnishings and works by notable Greek artists. At the hotel’s restaurant, guests can eat homemade cakes, jams and rizogalo (Greek rice pudding served with lemon peel) for breakfast before lounging by the infinity pool, a sun-soaked perch with views of Ithaca’s main harbor.

Specializing in modern Greek cuisine, this cliffside restaurant in Lefki offers outdoor terrace seating with unmatched views of the Strait of Ithaca and the island of Cephalonia. The chef Nikos Panaretos pairs rare Greek wines — like the lemony white Sklava and the full-bodied red Agiorgitiko produced by the Zacharias winery in the Peloponnese — with hearty traditional dishes made from locally sourced ingredients, such as eggplant moussaka topped with yogurt and sweet graviera cheese from Naxos and white grouper lathered in creamy coconut and lemongrass and finished with savory dry-aged salami from Lefkada.

Accessible by a rugged 30-minute hike through a pine forest from Skinos Beach or a private yacht charter from the harbor of Vathy — the route winds along the coastline of Ithaca, passing the chapel of Agiantrea and the bay of Schinos — this white-pebble beach is considered the most beautiful on the island. With only a small shop offering homemade snacks and umbrellas for rent, the beach remains largely undeveloped, providing a pristine place to enjoy Ithaca’s cerulean waters. Its open bay is perfect for swimming — with views of the dramatic craggy cliffs of Atokos Island.

A Journey Into Greece’s Land of a Thousand Stories
One writer chronicles his voyage to the island of Ithaca, where Odysseus was once reputedly king. 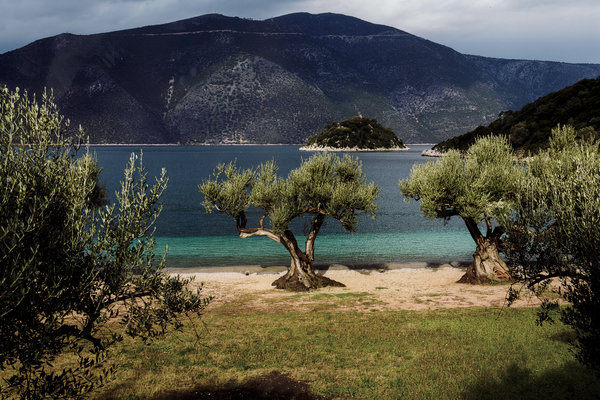