An estimated 15 million Yemenis are on the brink of starvation Thirteen civilians were killed by a Saudi-led coalition air strike in the Saada... 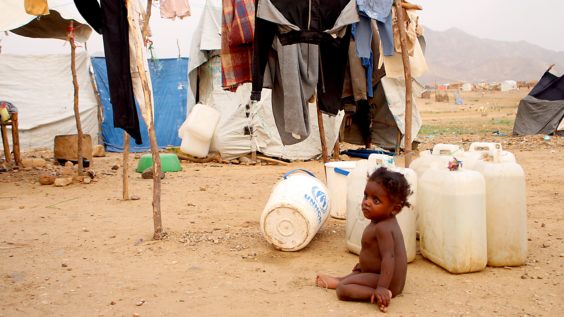 An estimated 15 million Yemenis are on the brink of starvation

Thirteen civilians were killed by a Saudi-led coalition air strike in the Saada province located in northern Yemen, according to medics at the scene. The strikes were a retaliatory measure against the Houthi rebels, who had previously attacked a Saudi base. The event underscores the growing civilian toll of the ongoing Yemeni war.

According to the United Nations Office for the Coordination of Humanitarian Affairs (UNOCHR), 6,872 civilians were killed and 10,768 others injured as of November 2018.

In 2015, Saudi Arabia formed a coalition with other Sunni countries – foremost the United Arab Emirates – and began targeting the rebels, whom Riyadh accuses its arch-foe Iran of supplying with weaponry. The Saudi intervention with Yemen was backed by the US, France and the UK.

Within the United States, however, support for continuing American efforts in the war has dwindled due to the rising number of civilian deaths and the increasing unpopularity for Saudi Arabia following its alleged involvement in the murder of Saudi journalist Jamal Khashoggi. In April, Congress voted to end American involvement in Yemen, a move that was vetoed by President Donald Trump.

The war has devastated the civilian population in Yemen. In addition to violence, Yemeni citizens suffer from disease and malnutrition. Radhya Al-Mutawakel, chairperson of the Yemen-based Mwatana Organization for Human Rights, told The Media Line: “When civilians get hurt by an airstrike, that’s just the start of the disaster.”

That is due to the fact that there is no longer any health care infrastructure in a country that suffered in 2017 from a major epidemic of cholera, which remains a problem. According to the World Health Organization, which cites figures from the Ministry of Public Health and Population of Yemen, the total number of suspected cholera cases between January 1, 2018 to June 30, 2019 was approximately 823,000. 1,210 of those cases were fatal. Children under the age of five make up nearly a quarter of the total suspected cases this year.

Children have been especially impacted as a result of the war. According to Juliette Touma, chief of communications officer at UNICEF Middle East and North Africa, “400,000 [Yemenis] under the age of 5 are severely malnourished. Every ten minutes, one child [in Yemen] dies of preventable causes,” she told The Media Line. “It’s a very grim reality.”

According to UNOCHR, nearly 80 percent of Yemen’s population of approximately 28 million, depend upon humanitarian aid to survive.  Efforts to alleviate the crisis have been hampered by the failure of the international community to live up to its financial commitment to assist Yemenis.  In an interview with the AFP, United Nations Development Program administrator Achim Steiner said that out of the $2.6 billion dollars pledged toward humanitarian efforts in February, the UN has received only about $93 million.

While UNICEF’s Touma said that financial pledges were important, she contended that they will not end the humanitarian crisis.

“Financial aid, while appreciated, is only a Band-Aid. The only way to end the conflict is through a political solution,” Touma said. “Until that solution is reached, we will continue to be there.”

Al-Mutawakel of the Mwatana Organization for Human Rights wants the international community to be more involved in bringing about that political solution. “I want the world to act. Yemen is not forgotten, it’s ignored,” she said, adding that the global community must assert pressure on both sides to commit to advancing the peace process that started in Sweden in December.

Al-Mutawakel said another major issue affecting the lives of Yemenis is that people are not receiving their salaries.  “All parties involved in the conflict are using starvation as a weapon of war and one example is [by not paying them for their work],” she told The Media Line.

Al-Mutawakel further noted that neither the Houthis nor Yemen’s internationally recognized President Abd Rabbu Mansour Hadi – who is supported by the Saudi coalition – pay salaries.

“There is plenty of food in Yemen, but people have no source of income to buy it. The humanitarian crisis,” she continued, “is not a natural disaster, it is man-made.”

Prof. Shaul Gabbay, director of the Denver-based Global Research Institute, told The Media Line that “it is extremely difficult for any external intervention to be effective given the deep political crisis that the country is facing as a sand box for the effort by Saudi Arabia to constrain Iran.”

(Tara Kavaler is an intern in The Media Line’s Press and Policy Studies.)