A week ago, a small tanker ship approached the Persian Gulf after a 19-day voyage from China. The captain, as required by international rules,...

A week ago, a small tanker ship approached the Persian Gulf after a 19-day voyage from China. The captain, as required by international rules, reported the ship’s position, course, speed and another key detail: It was riding high in the water, meaning it was probably empty.

Then the Chinese-owned ship, the Sino Energy 1, went silent and essentially vanished from the grid.

It reported in again on Sunday, near the spot where it had vanished six days earlier, only now it was heading east, away from the Strait of Hormuz near Iran. If past patterns hold, the captain will soon report that it is riding low in the water, meaning its tanks are likely full.

As the Trump administration’s sanctions on Iranian oil and petrochemical products have taken hold, some of the world’s shipping fleets have defied the restrictions by “going dark” when they pick up cargo in Iranian ports, according to commercial analysts who track shipping data and intelligence from authorities in Israel, a country that backs the Trump crackdown.

“They are hiding their activity,” said Samir Madani, co-founder of TankerTrackers.com, a company that uses satellite imagery to identify tankers calling on Iranian ports. “They don’t want to broadcast the fact that they have been in Iran, evading sanctions. It’s that simple.”

A maritime treaty overseen by a United Nations agency requires ships of 300 tons or more that travel international routes to have an automatic identification system. The gear helps avoid collisions and aids in search-and-rescue operations. It also allows countries to monitor shipping traffic.

It is not illegal under international law to buy and haul Iranian oil or related products. The Trump administration’s sanctions, which went into effect last November after the United States pulled out of the Iran nuclear agreement, are unilateral.

But foreign companies doing business with American companies or banks risk being punished by the United States. Actions can include banning American banks from working with them, freezing assets and barring company officials from traveling to the United States, said Richard Nephew, a research scholar at Columbia University who oversaw Iran policy on the National Security Council during the Obama administration.

“We have sanctioned dozens of Chinese state-owned enterprises for nuclear, missile, arms and other forms of proliferation,” Mr. Nephew said. “But it is not entered into lightly.”

A State Department spokeswoman said, “We do not comment on intelligence matters.” 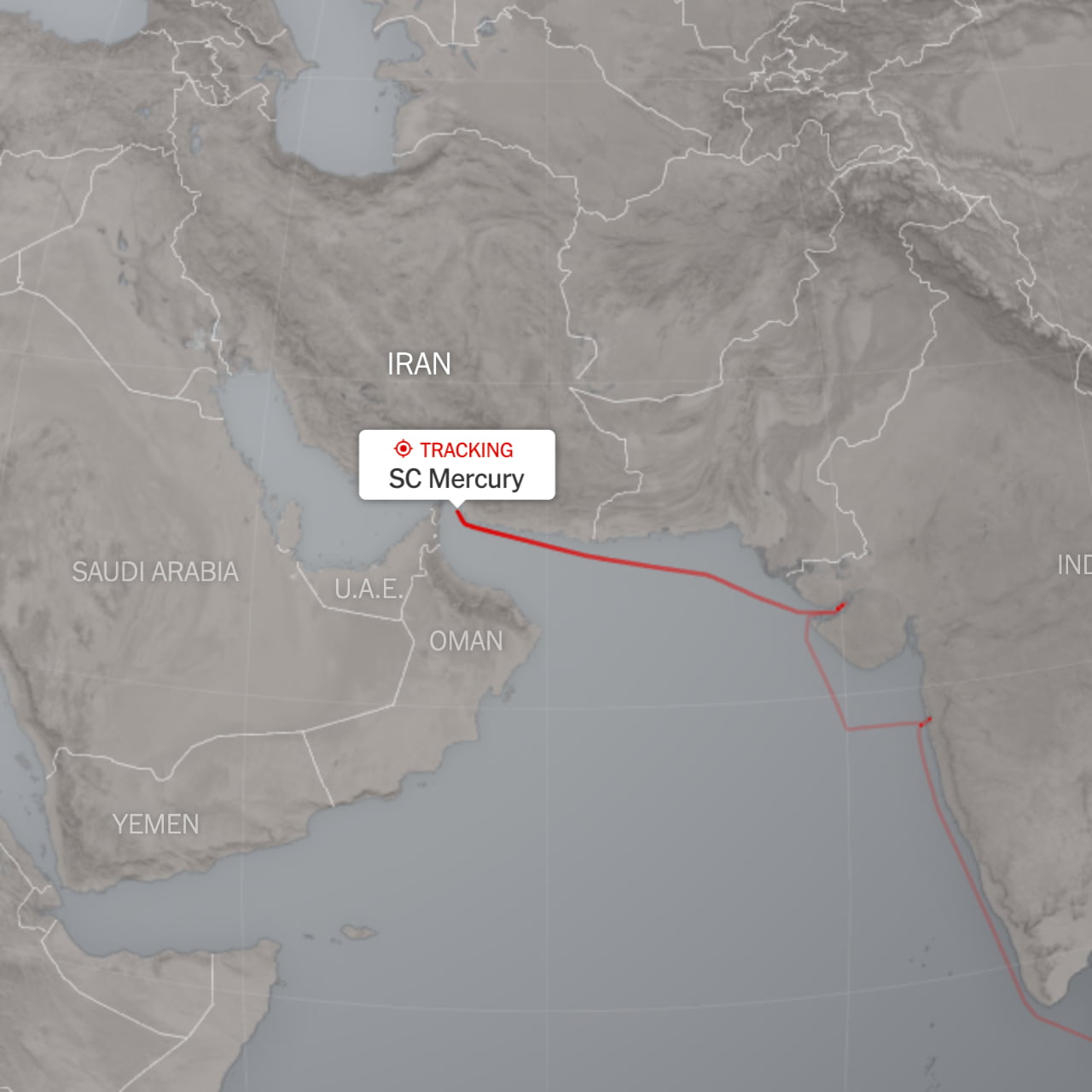 The SC Mercury, an oil and chemical tanker owned by Sinochem until April 2019, sails regularly from Chinese ports into the Persian Gulf. 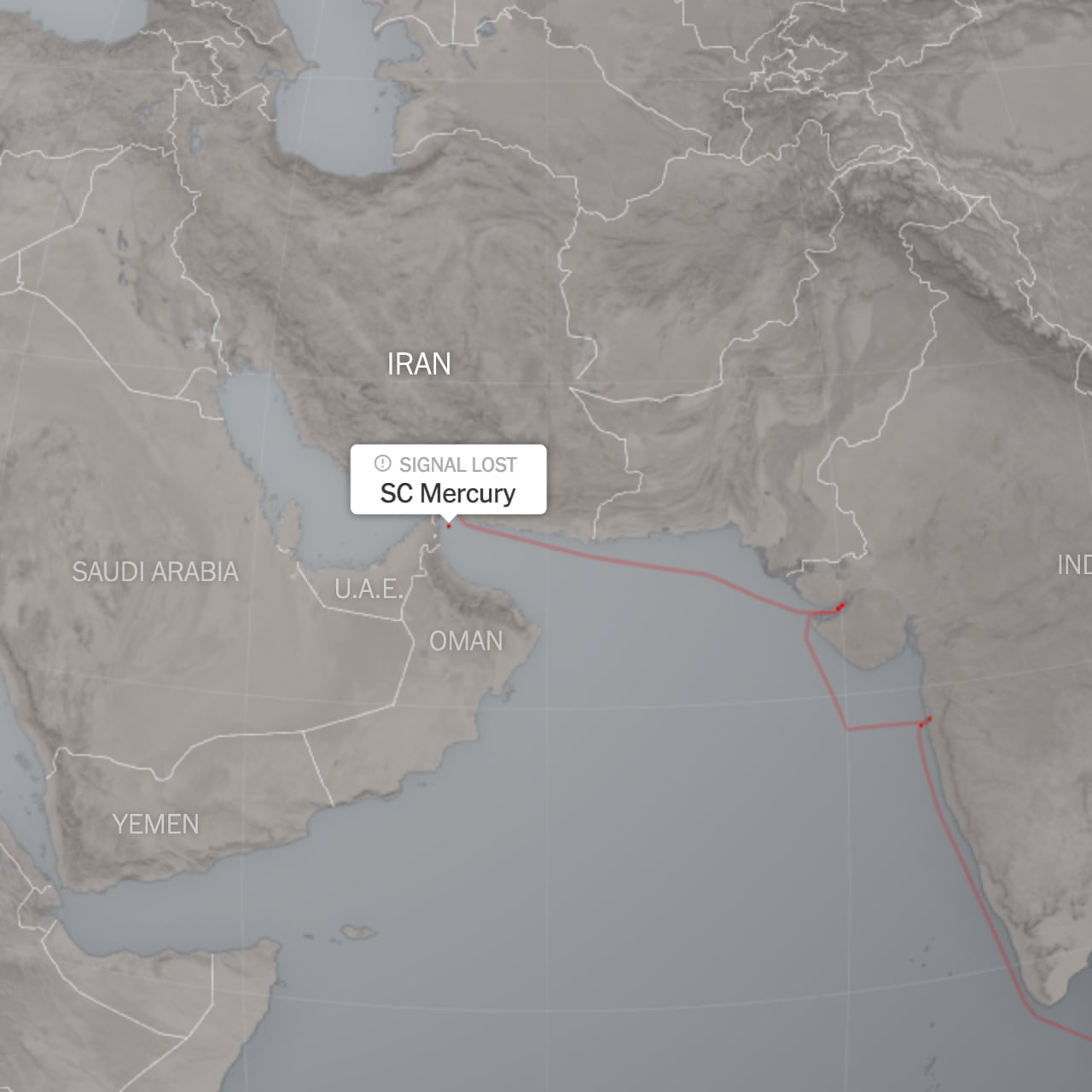 On the morning of Jan. 27, 2018, it disappeared. The Mercury’s A.I.S. transponder — a device that broadcasts a ship’s location continuously, required by an international maritime treaty — fell silent.

Several days later, the transponder came back to life, tracking the Mercury as it sailed toward ports in India. Having deposited its cargo, it turned back toward the gulf.

On Feb. 15, 2018, the ship went dark again as it navigated the Strait of Hormuz, reappearing days later to begin a weekslong journey back to Shanghai.

All ships 300 tons or greater on international journeys are required to broadcast their location, course and speed on the system, but sometimes, to hide their activities from competitors, ships “go dark,” analysts say. 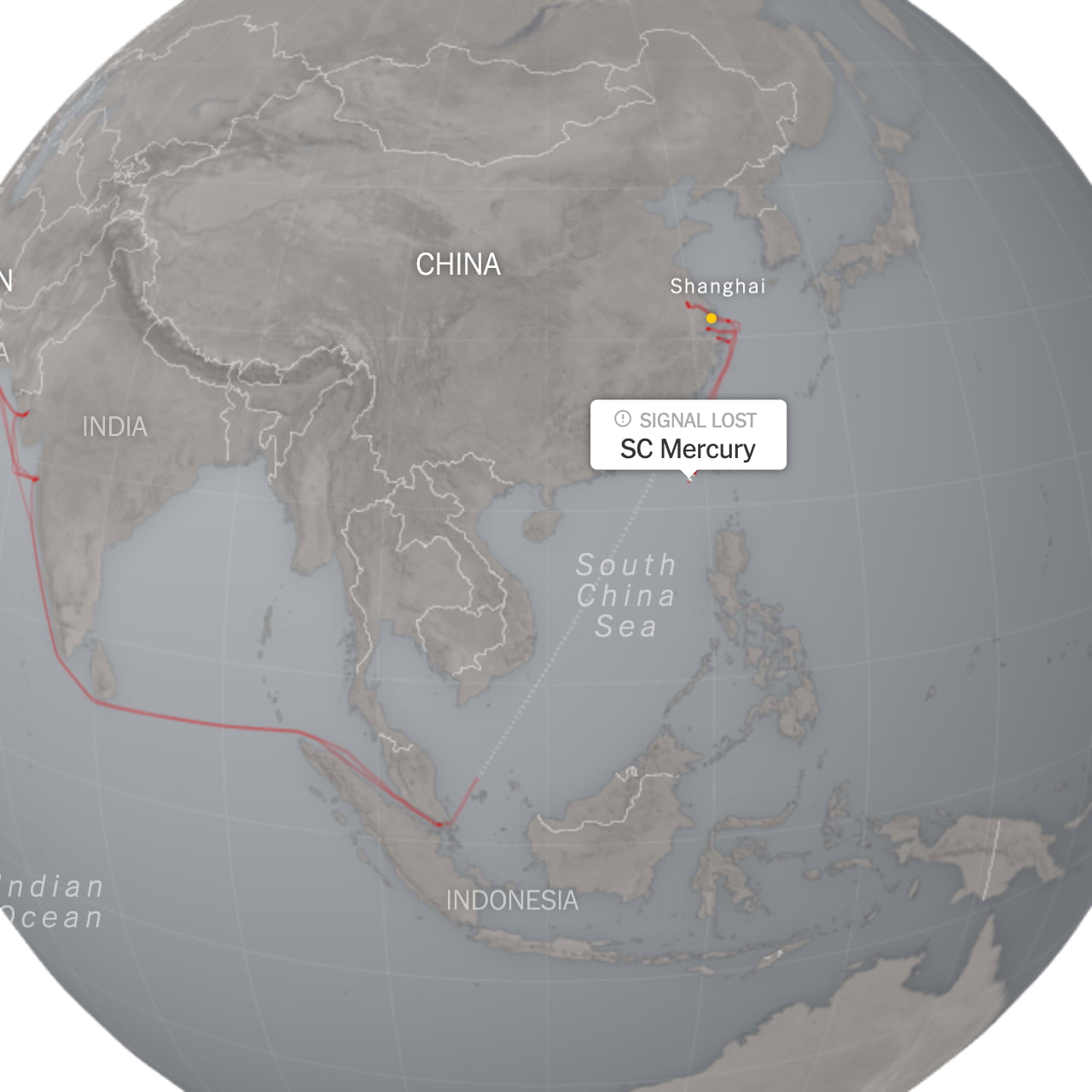 The Persian Gulf isn’t the only place in the world where ships go silent. It also happens in the South China Sea, but there, one analyst said, the reason may be because the sheer number of ships overwhelms the system. 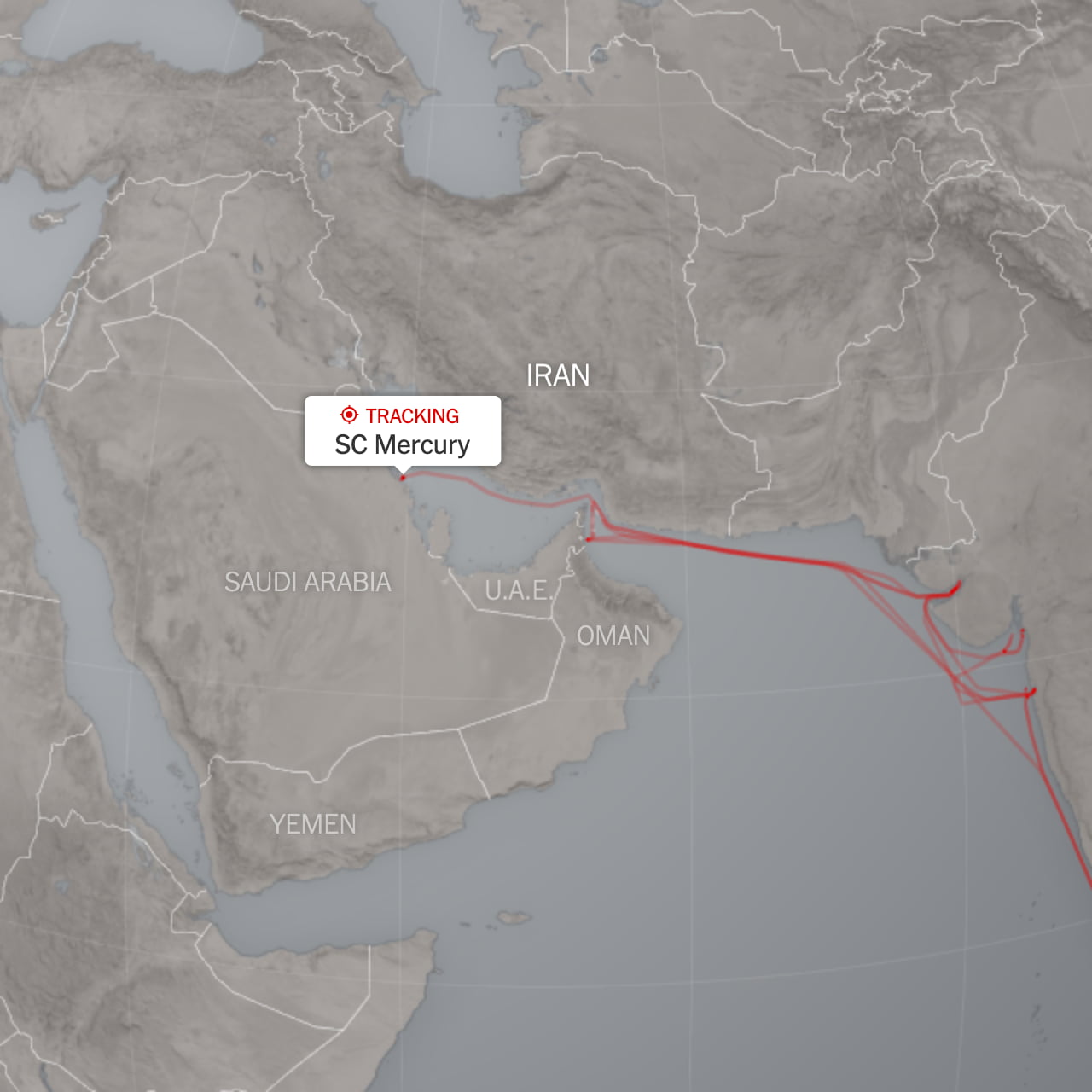 In the case of the Mercury, outages appeared to be more selective. In April and May 2018, the ship’s transponder stayed active as it visited ports in Saudi Arabia, Bahrain and the United Arab Emirates.

When a ship goes dark in the Persian Gulf, it may be related to dodging sanctions, not technical problems, said Samir Madani of TankerTrackers.com, which uses satellite technology to monitor ships. Countries and companies that import Iranian oil risk punishment from the United States. 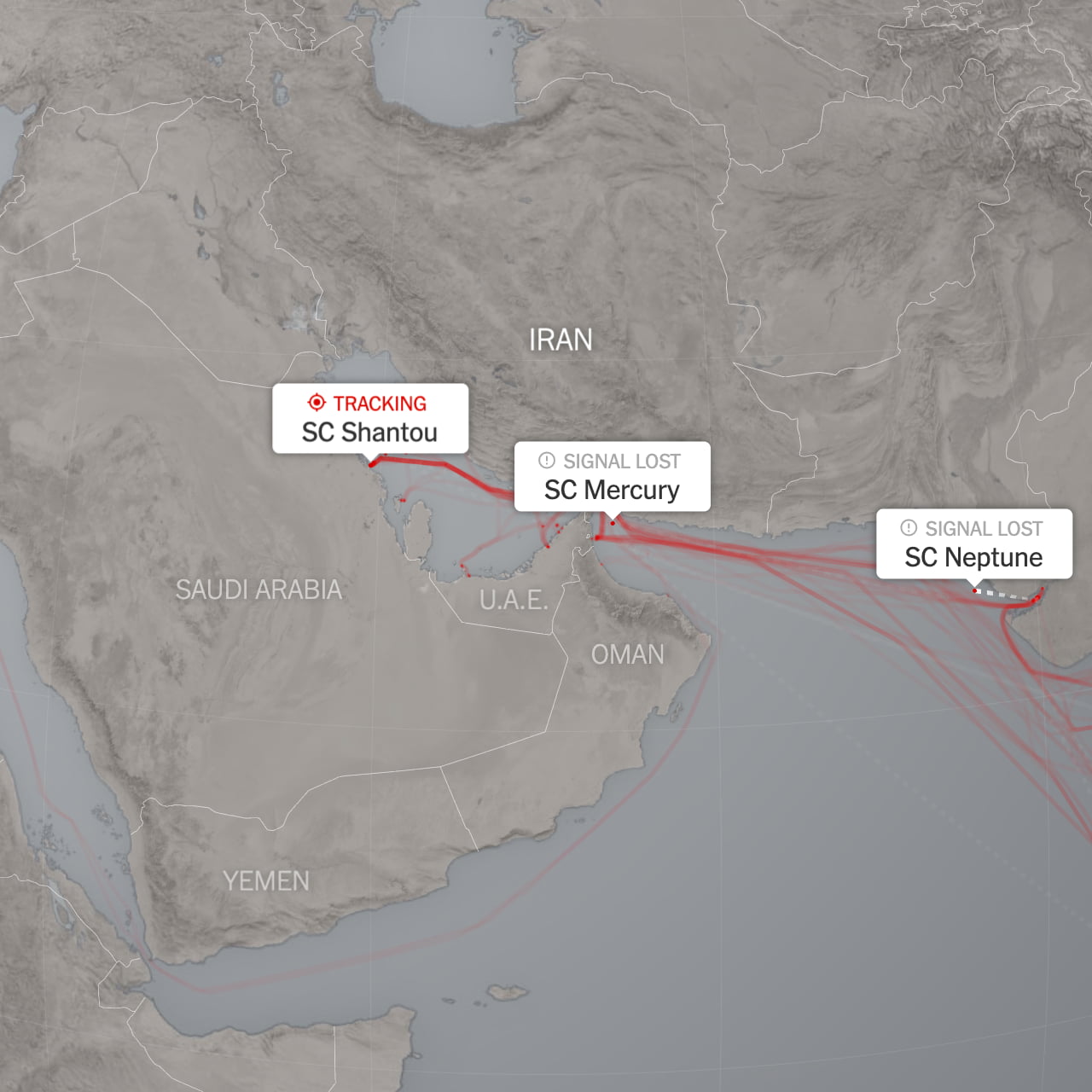 In the past 18 months, the five ships, which regularly sail between China and the Persian Gulf, made only two port visits in Iran, according to information from their A.I.S. data. In contrast, those ships made close to 50 stops in ports in Bahrain, Oman, Saudi Arabia and the U.A.E. In another 28 instances, the ships vanished in the region for days or weeks.

Brian Hook, the United States special representative for Iran, told reporters in London on Friday that the United States would punish any country importing Iranian oil. Mr. Hook was responding to a question about reports of Iranian oil going to Asia, according to the Reuters news agency.

President Trump’s efforts to halt Iranian oil and petrochemical exports are at the heart of rising tensions between the two countries. Last month, he imposed new sanctions on Iran’s leaders after it downed an American surveillance drone and nearly precipitated a counterstrike that was called off at the last minute. The attack on the drone came a week after the United States accused Iran of being responsible for explosions that had crippled two tankers near the Strait of Hormuz.

Iran has been trying to work around the American sanctions by offering “significant reductions” in price for its oil and petrochemical products, said Gary Samore, a professor at Brandeis University who worked on weapons issues in the Obama administration.

When shipping companies defy the sanctions, they weaken their effectiveness, especially if the companies — or the countries where they are based — see no consequences, analysts said. Some shipping companies with direct Iranian ties do not try to hide their movements, according to data collected by the commercial tracking sites.

Last month, the Salina, an Iranian-flagged oil tanker under American sanctions, docked in Jinzhou Bay, a port in northeastern China, according to data from VesselsValue, a website that analyzes global shipping information. The Salina regularly reported its position, course and speed via the automatic identification system.

Oil tankers like the Salina, which can transport as much as a million barrels of crude, or about 5 percent of the daily consumption of the United States, are so big that they can call on only a limited number of ports. They are also more easily spotted by satellites than smaller ships like the Sino Energy 1.

That vessel, and its more than 40 sister ships, are far more difficult to track when they go off the grid. They were owned until April by a subsidiary of Sinochem, a state-owned company in China that is one of the world’s biggest chemical manufacturers.

Sinochem has extensive business ties in the United States. It has an office in Houston and works with big American companies including Boeing and Exxon Mobil. In March, it signed an agreement with Citibank to “deepen the partnership” between the two companies, Sinochem said. In 2013, a United States subsidiary of Sinochem bought a 40 percent stake in a Texas shale deposit for $1.7 billion.

In April, it sold a controlling share in its shipping fleet to a private company, Inner Mongolia Junzheng Energy & Chemical Group Co., whose biggest shareholder is Du Jiangtao, a Chinese billionaire who made his fortune in medical equipment, chemicals and coal-generated power.

A person answering the phone at Junzheng’s investor relations office was not familiar with the newly acquired shipping business. For now, Junzheng owns 40 percent of Sinochem’s former shipping fleet, with the rest owned by two Beijing companies.

Frank Ning, the chairman of Sinochem, speaking in a brief interview in Dalian, China, said that shipping had not been central to the company’s business. In a statement, the company said it had “adopted strict compliance policies and governance on export control and sanctions,” though a former employee who had helped manage the shipping business, speaking on the condition of anonymity, said the company had shipped petrochemicals from Iran for years.

The tracking data also show that some of the Sinochem ships made trips to Iran before the fleet was sold, and both before and after the American sanctions went into effect.

In April 2018, for example, one of the ships, the SC Brilliant, was moored at Asalouyeh, a major Iranian petrochemical depot on the Persian Gulf, according to data from VesselsValue. The SC Brilliant’s voyage was easy to plot. Its captain made constant reports via the automatic identification system, broadcasting its course, speed and destination.

But after Mr. Trump’s announcement last August that he would reimpose sanctions on Iran’s petroleum industry, the SC Brilliant’s voyages became less transparent.

The pattern was repeated in February, with the ship disappearing for four days, according to the tracking data.

That month, another Sinochem ship, the SC Neptune, stopped transmitting its position when it approached the Strait of Hormuz, the tracking data show. Four days later, for a brief period, it appeared back on the grid, transmitting its location from an export terminal on Iran’s Kharg Island. It then went quiet for another 24 hours, reappearing on its way out of the strait.

In some parts of the world, including the South China Sea, it is not uncommon for ships to go silent because the automatic identification system may be overloaded by the volume of vessels, said Court Smith, a former officer in the United States Coast Guard who is now an analyst at VesselsValue. Sometimes they do so for competitive reasons, he added.

But in the Persian Gulf, where traffic is lighter, Mr. Smith said, vessels generally do not turn off the system, known in the industry as A.I.S.

“If the A.I.S. signal is lost, it is almost certainly because the A.I.S. transponder has been disabled or turned off,” Mr. Smith said of ships in the Persian Gulf. “The captain has decided to turn off the A.I.S.”

Another possible clue that Iran-bound ships are disabling their reporting systems is that ships making trips to countries on the western part of the gulf are not going off the grid.

The SC Mercury, another of the Sinochem ships, disappeared for about nine days at the end of December and into January, vanishing close to where the Sino Energy 1 disappeared last week, the tracking data show. But in early April, the ship’s course through the Persian Gulf had no interruptions in its signal. The destination that time was the United Arab Emirates.