Chinese President Xi Jinping has offered his support to Greece‘s efforts for the return of the 2,500-year-old Parthenon Marbles from the United Kingdom, weighing in on...

Chinese President Xi Jinping has offered his support to Greece‘s efforts for the return of the 2,500-year-old Parthenon Marbles from the United Kingdom, weighing in on a long-standing dispute between the two European countries.

Xi made the comments on Tuesday while touring the Acropolis Museum in Athens alongside his Greek counterpart, Prokopis Pavlopoulos.

Greece opened the museum at the foot of the Acropolis hill 10 years ago, hoping it will one day house the sculptures that are currently on display at the British Museum in London. The site in the centre of the Greek capital exhibits originals alongside plaster casts of the carvings shown in the UK.

“Imagine this place with the marbles, and [then] imagine how the marbles are at this moment in the British Museum, which is holding them illegally and against every sense of culture,” Pavlopoulos told Xi, appealing to the Chinese president for support.

“I totally agree with you,” replied Xi, who was on a three-day state visit to Greece. “Not only will you have my support, we should work together,” he added.

“I assure you of our support because we also have many Chinese cultural works outside our country that we are trying to recover.” 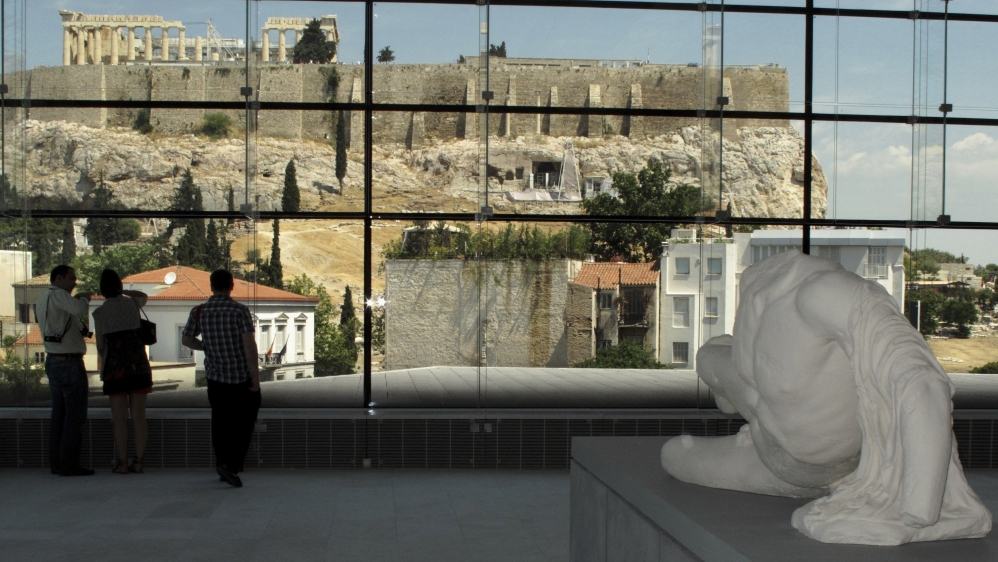 Visitors look at the temple of the Parthenon from inside the Acropolis museum in Athens [File: Yiorgos Karahalis/Reuters]

The marbles, which include depictions of battles between mythical ancient Greeks and centaurs, were taken by British diplomat Lord Elgin in the early 19th century.

The UK has always refused to return the carvings, often still known as the Elgin Marbles, arguing that they were taken from the Acropolis with the permission of local Ottoman rulers at the time. The British Museum says: “The sculptures are part of everyone’s shared heritage and transcend cultural boundaries.”

Greece has been campaigning for more than 30 years for their return, arguing that the Ottoman empire was an occupying force and any permission granted during its time is not valid.

“Ιf you ask people what they prefer, to have these marbles together or divided, it is very difficult to justify wanting them divided.”

In April, Pavlopoulos called on the UK to free the Parthenon Marbles from the “murky prison” of its national museum.

Prime Minister Kyriakos Mitsotakis, elected in July, made an official request for the loan of the marbles for the 200th-anniversary celebrations of Greek independence in 2021.

The British Museum has said it would examine any request from Greece to borrow exhibits.