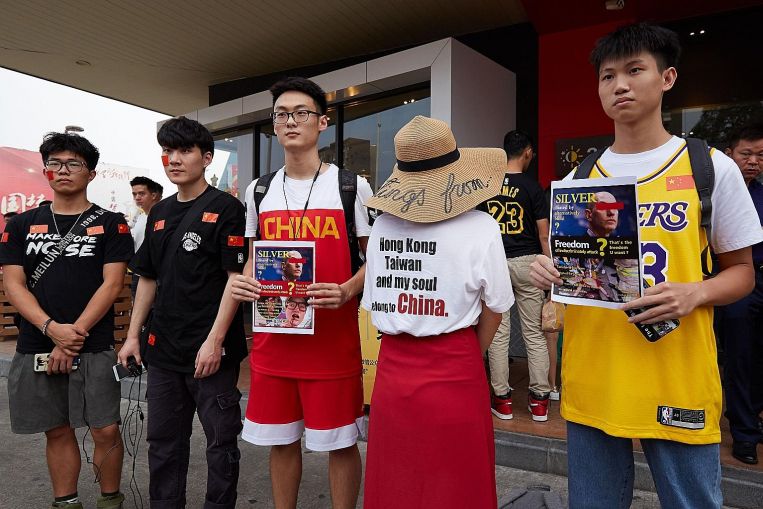 SHENZHEN • Thousands of Chinese basketball fans cheered on the Los Angeles Lakers and Brooklyn Nets at a National Basketball Association (NBA) exhibition game in the city of Shenzhen on Saturday night – but some warned the organisation to stay out of politics.

Mr Daryl Morey, general manager of the Houston Rockets, voiced support for pro-democracy protests in Hong Kong in a tweet last week, prompting Chinese sponsors and partners to cut ties with the NBA. China is estimated to be worth more than US$4 billion (S$5.5 billion) for the NBA, so the stakes are high.

Outside the arena on Saturday, protesters waved Chinese flags and held admonitory red signs. “Morey must apologise to China,” read one. Another said: “Violations of national sovereignty will not be tolerated.”

China has accused the West of stirring up anti-Beijing sentiment in Hong Kong, where anti-government protesters have gained momentum over the past four months.

A 20-year-old Chinese university student at Saturday’s game, who would give only his English name, Andy, was unfazed by the controversy and blamed foreign media for stirring things up. “Sport is a pure thing and I’m not going to stop going because Morey spoke about things he doesn’t understand,” he said. “If the NBA became harmful to China’s interests, we would reject it. But this wouldn’t be such a big deal if you foreign media would shut up about it.”

The protests in the former British colony began in opposition to a Bill allowing extradition to mainland China, but have since evolved into broader calls for democracy.

Hong Kong returned to China in 1997 under a “one country, two systems” framework, guaranteeing it wide-ranging autonomy.

Chemistry student Phoebe, 22, said she would not have come if she did not already have a ticket. “The US needs to understand it can’t meddle in other countries’ politics. If the NBA does this again, I’d rather it leave the country,” she said.

Property manager Jin, 26, who came from Hong Kong with a friend to attend the game, said he felt nervous. Asked if he had considered not coming because of the controversy, he paused as policemen strolled by. “Well, it’s the Lakers and the Nets; they’ve got strong line-ups this year,” he said. REUTERS