ZHUHAI, CHINA (REUTERS) – China is leading the US in a race to deploy hypersonic missiles that would defeat existing air defence systems, according... 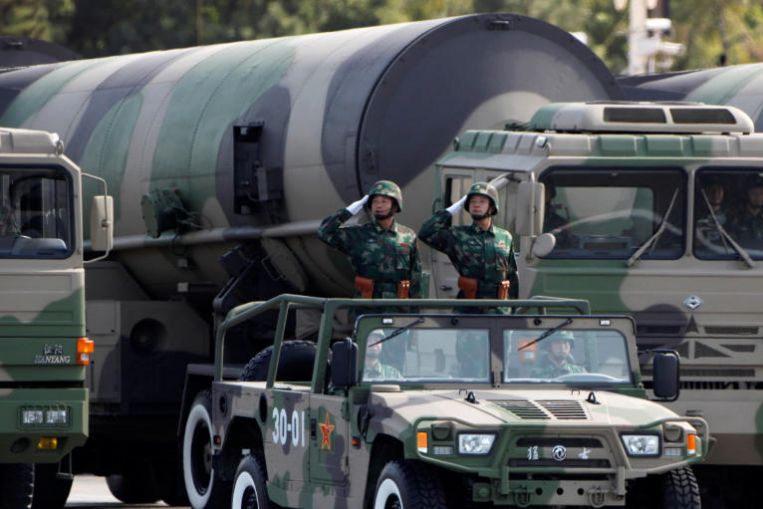 ZHUHAI, CHINA (REUTERS) – China is leading the US in a race to deploy hypersonic missiles that would defeat existing air defence systems, according to senior US officials.

The combination of speed, manoeuvrability and altitude of these missiles makes them difficult to track and intercept.

They travel at speeds of more than five times the speed of sound or about 6,200kmh. Some will travel as fast as 25,000kmh, according to US and other Western weapons researchers. That’s about 25 times as fast as modern passenger jets.

Admiral Harry Harris, the former head of US Pacific Command, told the House Armed Services Committee in February last year that hypersonic weapons were one of a range of advanced technologies where China was beginning to outpace the US military, challenging its dominance in the Asia-Pacific region.

Last April, Dr Michael Griffin, the US Undersecretary of Defence for Research and Engineering, told the Senate Armed Services Committee that China has deployed, or is close to deploying, hypersonic systems armed with conventional warheads.

These can travel thousands of kilometres from the Chinese coast and threaten American forward bases or carrier battle groups, he said.

“We do not have defences against those systems,” Dr Griffin said.

Russia may have already fielded a hypersonic weapon. At a parade in May last year, the Russian military displayed what it had earlier said was a hypersonic missile. Russian President Vladimir Putin has described the missile as invincible.

Russia’s Defence Ministry did not respond to questions from Reuters about its hypersonic weapons capabilities.

In early November, China unveiled a new ballistic anti-ship missile, the CM-401, at the biennial airshow in the southern city of Zhuhai.

Reports in the official state-controlled media said the new missile was a hypersonic weapon.

An information panel alongside a model of the new missile said the CM-401 was a “high supersonic” ballistic missile which had a trajectory reaching near space. It had a range of up to 290 kilometres, the panel said.

China, Russia and the United States have focused research and development on two classes of these weapons: hypersonic glide vehicles and cruise missiles that fly at hypersonic speeds, according to US and other Western weapons analysts and military officials.

Both types could carry conventional or nuclear payloads.

A hypersonic glide vehicle is boosted aloft on a rocket to heights of between 40km to 100km above the earth before detaching to glide along the upper atmosphere towards its target.

It is released at a height and speed that would allow it to glide unpowered to the target.

Control surfaces on the glide vehicle mean it can steer an unpredictable course and manoeuvre sharply as it approaches impact.

These glide vehicles follow a much flatter and lower trajectory than the high, arching path of a ballistic missile, these researchers say. That makes them much harder to detect early with radar, giving missile defences less time to respond.

After years of stop-start development of hypersonics, the US is now trying to accelerate testing and deployment to match China and Russia, according to senior Pentagon officials.

And, the US navy said it conducted a successful test of a long-range hypersonic missile on Oct 30, 2017.

“Frankly, we were the leaders in that 10 and 15 years ago, and we just let it drop,” Dr Griffin told the US Senate Armed Services Committee in April last year. “We need to get started again.”