Santiago – Chile has been gripped by a nationwide movement against high living costs and inequality. President Sebastian Pinera declared a state of emergency...

Santiago – Chile has been gripped by a nationwide movement against high living costs and inequality. President Sebastian Pinera declared a state of emergency on Saturday, with curfews issued in some parts of the country.

The protests have at times turned violent, with clashes between police and protesters. Police have used tear gas, water cannon and rubber bullets.

Looting has also taken place and supermarkets and petrol stations have been set on fire.

So far, at least 15 civilians have been killed, according to officials.

It is the worst violence the country has witnessed since the end of the 17-year-long military dictatorship of Augusto Pinochet in 1990.

Despite the unrest, the majority of protests taking place across the country have seen civilians take to the streets, banging spoons against cooking pots – a form of protest known as cacerolazo – calling for the resignation of Pinera.

As protests continue, Al Jazeera examines the underlying reasons behind the protests in what is considered one of South America’s most stable countries.

1. How did the protests start, and who was behind them?

The protests began as a student-led demonstration against transport fares.

In early October, the government announced that the metro rush hour prices would rise by 0.30 pesos ($0.04).

Responding to public outcry against the rising fare, Minister of Economy Juan Andres Fontaine announced that those upset with the price rise could wake up earlier and pay a lower rate.

“When the costs rise, there are not many options,” he said at the time.

Outrage grew after the remarks, leading school children to conduct a mass fare evasion by jumping over the metro turnstiles, and, in some instances, destroying them.

“Evade, and not pay, is another way of fighting,” they chanted at the time. 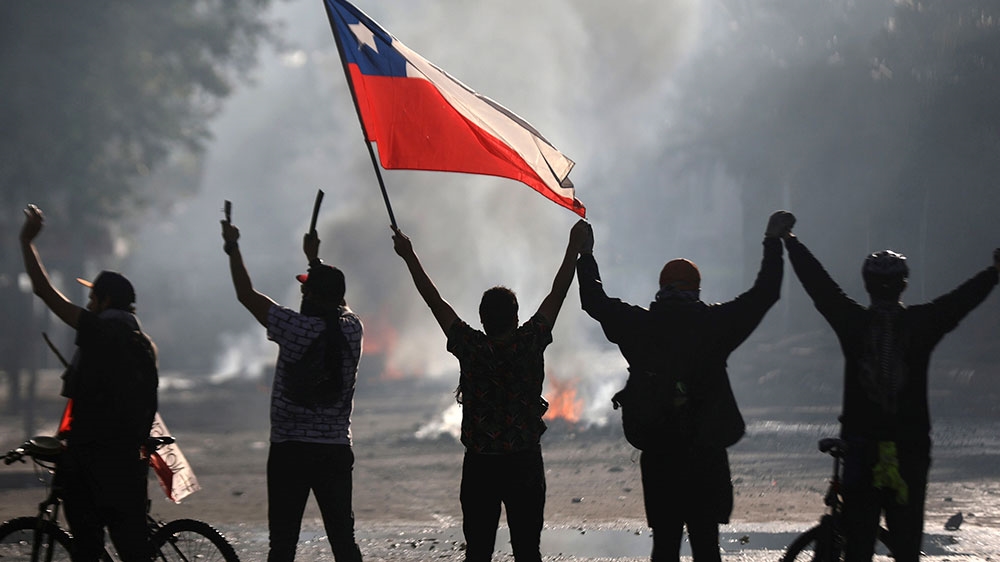 According to Victor Villegas, a sociologist at Santiago’s Alberto Hurtado University, “it’s not a coincidence” that the movement began with high school students because “they have always driven Chilean social movements”.

“Since the dictatorship, they have been involved in political movements, and this time again, they again took the baton and started the protests,” he said.

As police attempted to stop the students at the stations with force, the protests spilled out into the streets last Friday.

Metro stations, supermarkets, and petrol stations were burned throughout the night, leading the president to call a state of emergency on Saturday morning.

From then on, a nationwide movement began, seeing people occupy the streets and demanding the president’s resignation.

2. Are the protests still about the metro prices?

Anger goes far beyond the cost of transport.

Chileans are also frustrated with the increasing cost of living, as well as low wages and pensions, a lack of education rights, a poor public health system and crippling inequality.

“The 30 cents [$0.04] were just the tip of the iceberg,” said Jacinta Urivi, a 29-year-old publicist who has been taken part in the street protests since they began on Saturday.

“We don’t have good public health, the salaries are low – there are so many things that act against the people, that they (the politicians) fill their pockets with. I am proud and happy that people are waking up,” Urivi told Al Jazeera. 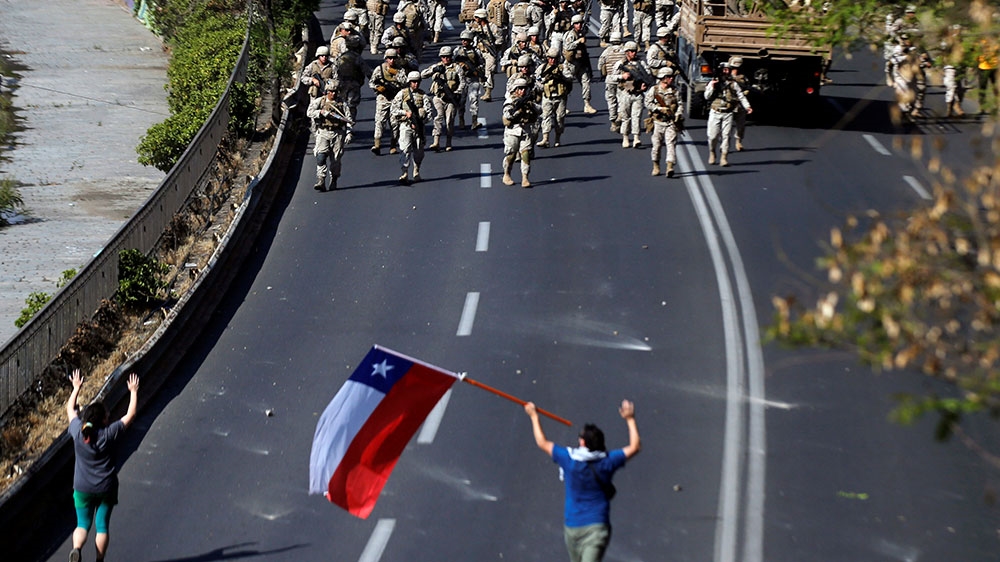 Chilean soldiers gather near demonstrators, one of whom holds a Chilean flag, during a protest [Edgard Garrido/Reuters]

According to Jose Miguel Ahumada, a political economist and associate professor at the University of Chile, the country is “one of the most unequal countries in Latin America”.

3. What is the state of emergency?

The state of emergency allows the suspension of certain public liberties, such as allowing free movement and assembly. It is used with the purpose to maintain public order.

It has most commonly been applied in Chilean democracy during the aftermath of natural disasters – the last time was after the 2010 earthquake. 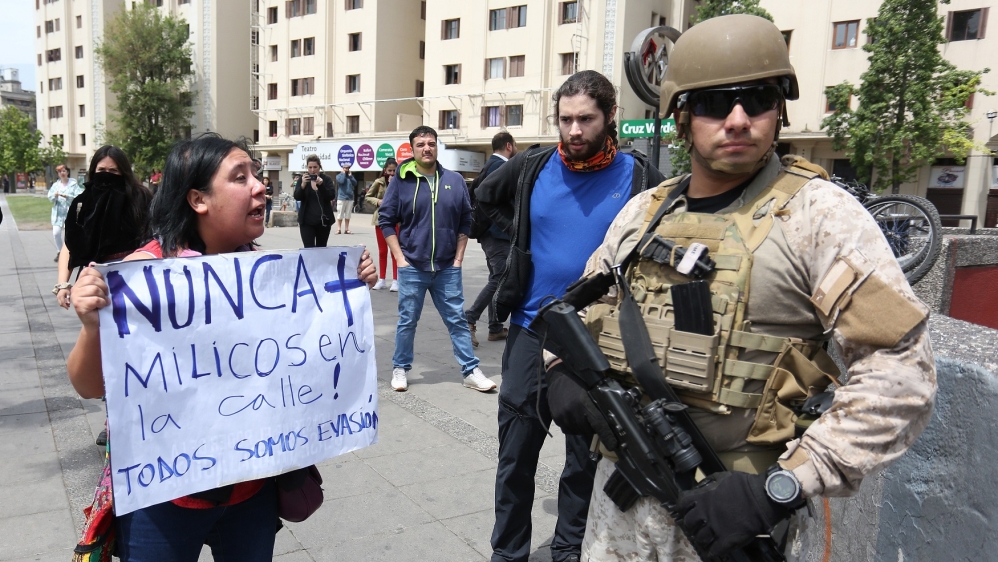 During this time, the military is employed to guard the streets, with generals appointed in every region where the state of emergency is valid.

The generals can make decisions on whether to impose curfews and decide on curfew hours.

Once issued, the state of emergency is valid for 15 days. It is currently operating in several regions of the country.

4. What has been Pinera’s response?

Many criticised Pinera’s decision to call a state of emergency so quickly, without addressing the public first.

In statements, he justified his decision to put the military on the streets, saying it was to maintain public order against vandals and crime.

On Sunday evening, he said the country was “at war against a powerful enemy, who is willing to use violence without any limits”.

He has been accused of framing the situation as a public problem rather than a state one, without addressing the core problems of the unrest.

Pinera said he would meet with opposition leaders on Tuesday to agree on a “social contract”, but several left-wing parties have called for a boycott of the talks.

5. How many people have died? How many have been arrested?

Videos have surfaced on social media showing the military hitting, shooting, and running over civilians on the street.

Officials have said that 15 people have been killed, including 11 who had died in arson attempts, looting and rioting and two who were killed by military officials. 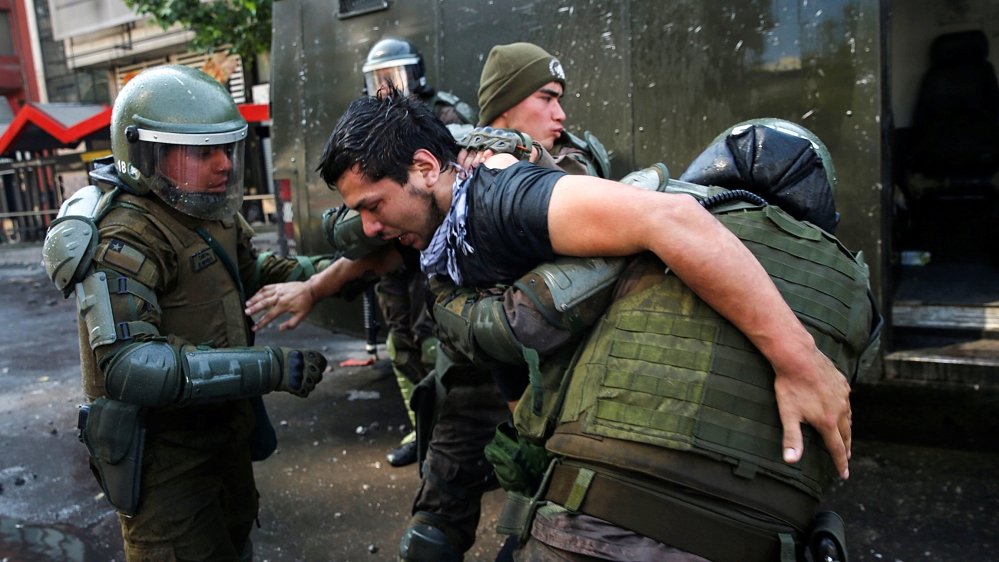 On Monday evening, the National Institute of Human Rights said more than 1,420 civilians had gone to hospital with injuries from the unrest. At least 84 of those had wounds caused by weapons, according to the institute. More than 2,500 had been reportedly detained since the unrest began.

UN High Commissioner for Human RIghts Michelle Bachelet has called for an independent investigation into the deaths and “disturbing allegations” of excessive force used on protesters.

On Tuesday, the general in charge of security in the capital Santiago said officials would investigate alleged instances of abuse.

“We are not going to hide anything,” General Javier Iturriaga told reporters, according to the Reuters news agency.

The government’s stance is doing little to quell the unrest, principally blaming civilians for the disorder and justifying military violence.

Many of the protesters are demanding the president’s resignation, which does not seem likely in the short term.

Greater reforms for social services will have to be introduced if the government hopes to ease any tensions going forward, according to analysts.

“Chileans feel like they are losing public participation” in political decision making, Villegas, the sociologist, said.

“That they are treated as subjects of consumerism more than people with rights.”