Children who refuse to brush their teeth may be putting themselves at risk of heart disease in later life ‘because they are more likely...

Children who refuse to brush their teeth may be putting themselves at risk of heart disease in later life, research suggests.

A study that followed 755 children over 27 years found those with tooth decay or gum disease were more likely to have a build-up of plaque in their arteries as adults, known as atherosclerosis.

This limits the amount of oxygen-rich blood that can reach our organs, raising our risk of a heart attack, stroke or even early death.

Gum disease occurs when bacteria in plaque infects the tissues that support our teeth. Some people’s bodies are thought to over-react to this bacteria by triggering excessive inflammation.

This inflammation may gradually damage our blood vessels, leading to atherosclerosis. 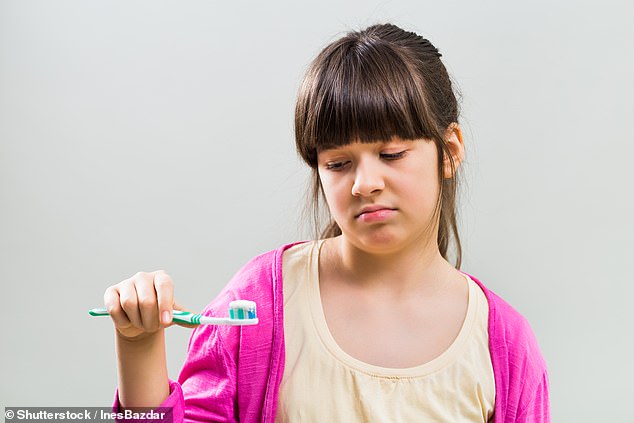 The study was carried out by the University of Helsinki and led by Dr Pirkko Pussinen, a researcher in the department of oral and maxillofacial diseases.

The association between gum disease and heart conditions in adults is well known, however, how oral health in childhood affects us in later life is poorly understood.

‘The observation is novel, since there are no earlier follow-up studies on childhood oral infections and the risk of cardiovascular diseases,’ Dr Pussinen said.

Almost a third of five-year-olds in the UK have tooth decay, Faculty of Dental Surgery statistics show.

And around 42 per cent of two-to-11 year olds have decay in their baby teeth in the US, according to the National Institute of Dental and Craniofacial Research.

Heart disease is responsible for one in four deaths in both the UK and US, statistics reveal.

DOES GUM DISEASE CAUSE HEART CONDITIONS?

Gum disease begins when plaque builds up around the teeth.

A completely different type of plaque – which is made up of fat, cholesterol, calcium and other substances – can accumulate in our arteries, which is known as atherosclerosis.

Over time this can cause our arteries to harden, which may restrict the amount of oxygen-rich blood that reaches our heart, brain and other organs.

This can trigger a heart attack, stroke or even premature death.

Some people’s bodies are thought to over-react to the bacteria in plaque and trigger excessive inflammation.

This inflammation may then damage the blood vessels in the heart and brain over a long period of time.

However, it may also be that certain lifestyle factors, such as smoking and an unhealthy diet, raise the risk of both gum and heart disease.

To uncover if there is a link between oral and cardiovascular health, the researchers looked at dental reports carried out on children aged six, nine and 12 in 1980.

These revealed 68, 87 and 82 per cent of the youngsters had bleeding gums, tooth decay or fillings, respectively.

Slight periodontal pocketing – when the bone and tissue around the teeth wears down – was found in 54 per cent of the children, particularly the boys.

And 61 and 34 per cent of the youngsters had one-to-three or one-to-four signs of an oral infection, respectability.

Symptoms of an infection can include toothache, temperature sensitivity, swelling in the face or fever.

In fact, only five per cent of the children’s mouths were considered totally healthy.

As adults, their carotid artery intima-media thickness was measured via an ultrasound scan.

This is a marker of atherosclerosis, with values of more than 0.9mm being abnormal, according to the European Society of Cardiology.

Caries is the scientific term for tooth decay, while periodontal disease describes infections of the structures around the teeth.

‘Oral infections were an independent risk factor for subclinical atherosclerosis; and their association with cardiovascular risk factors persevered through the entire follow-up,’ the researchers wrote.

‘Prevention and treatment of oral infections is important already in childhood.’