Official Airline, Turkish Airlines is Giving Riders and Public Chance to Win Once More Time This Year In a ride that covered the distance...

In a ride that covered the distance of 37 flights between Doha and Istanbul, there were over 1,700+ winners, the Champions who participated in this year’s event. 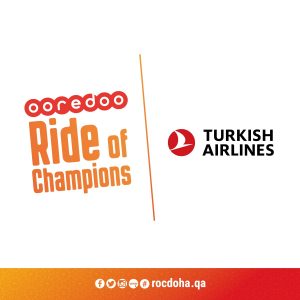 (8th December 2020, Doha, Qatar) Turkish Airlines was the proud sponsor and official airline of the 2020 Ooredoo Ride of Champions, organised by Qatar Cyclists Center.  As part of their support, and to celebrate the 2020 event, they are giving away round-trip (return) tickets between Doha and its expansive network in Turkey, and even flights to Europe. Prizes are being distributed in lucky draws or competitions including the Corporate Challenge, Social Media (for participants as well as any Qatar permanent residents), and for lucky volunteers, who helped make this year’s event such a success.

The ride covered a total distance of 101,589 cycled kilometers, which is approximately 37 flights between Qatar and Turkish Airlines’ home of Istanbul.

Turkish Airlines, which carries a 4-star rating on TripAdvisor and has earned Reader’s Choice awards year after year, offers a selection of daily flights out of Doha’s Hamad International Airport. The airline flies to more than 50 destinations within Turkey, and a handful of winners will get their chance to visit the destination of their choice in Turkey as an added celebration for finishing the Ooredoo Ride of Champions.

The chance to win has been extended to all Qatar Residents as well as the participants of this year’s event. Contestants may register by simply visiting @rocdoha on Instagram and following directions, as described on its social media accounts. By Liking, Sharing, and Tagging three or more Instagram friends on a special Turkish Airlines post shown on the @rocdoha account, contestants are able to gain entry into the lucky draw which takes place on 11th December, 2020.

The themes of this year’s giveaway centered around the Turkish Airlines hashtags: #MeetAgain #WidenYourWord, and of course, #TurkishAirlines.

Contestants have until 10th December 2020 to enter and no purchase is necessary. More information is available at Instagram.com/rocdoha. The home of the Ooredoo Ride of Champions is at www.rocdoha.qa. You may also follow @rocdoha on Twitter, Facebook and Instagram.