Cannabis with high levels of CBD may 'protect the brain'

Cannabis with high levels of CBD may ‘protect the brain’ from weed’s harmful effects and could one day be used to ‘treat addiction or...

Smoking cannabis with higher levels of cannabidiol (CBD) causes less brain damage because it doesn’t make you as high, according to research.

People smoking weed should therefore try to avoid high-THC cannabis known as skunk and choose strains with more CBD to protect their brains.

THC is the chemical which has a hallucinogenic effect on the human brain and makes marijuana illegal in the UK.

And it appears to also be what damages the brain – but CBD may have a protective effect, researchers have found.

They suggest this finding could point to the use of CBD to treat brain disorders such as psychosis and addiction. 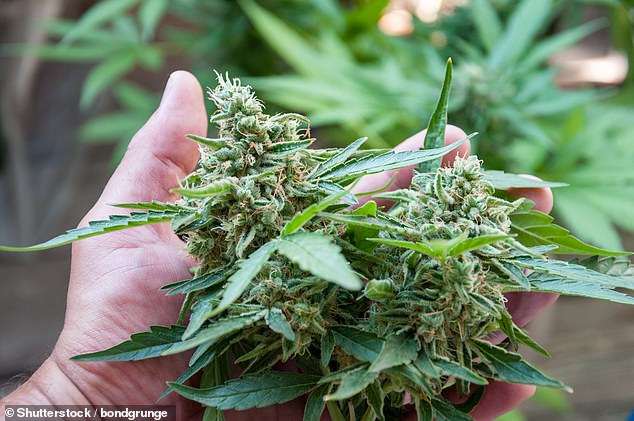 Scientists at University College London tested the effects of two different strains of cannabis on the brain.

The two strains were chosen to be comparable to what is available in ‘common usage’ – believed to be what people can buy from illegal dealers.

One was skunk, a super-potent form of the drug which makes up around 94 per cent of cannabis available on the streets of London.

The other was a strain which contained the same amount of THC but also more CBD, which is believed to counteract the negative effects of THC.

Powerful ‘skunk’ cannabis which is high in the psychoactive chemical THC (tetrahydrocannabinol) and low in CBD (cannabidiol) increases the risk of psychosis five-fold, a major study found in March.

The problem is so widespread that an astonishing 30 per cent of all cases of psychosis in London are caused by the drug, King’s College London researchers found.

They warned that 94 per cent of all cannabis available on the streets of the UK capital is now of the skunk form.

It is cultivated to have super-high levels of THC – making it up to 10 times more powerful than the ‘weed’ and ‘hashish’ more common 20 or 30 years ago.

The researchers studied more than 2,100 people in 11 cities in Europe and South America, in the biggest study of its kind ever undertaken.

The work, published in the Lancet Psychiatry journal, found that skunk – which they defined as having a THC level of more than 10 per cent – increased the odds of psychosis 4.8-fold if smoked every day, compared to someone who never used the drug.

‘Over the last two decades, rates of addiction and psychosis linked to cannabis have been on the rise,’ said study author Dr Matt Wall.

‘While at the same time stronger strains of cannabis with more THC and less CBD have become increasingly common.

‘We have now found that CBD appears to buffer the user against some of the acute effects of THC on the brain.’

Dr Wall and his colleagues monitored the brain activity of 17 people after they had taken the different strains.

The low-THC strain was found to reduce brain activity in the posterior singulate area of the brain, which is connected to areas known to be involved with learning and motivation.

It also reduced activity in the salience network, which helps the brain decide which sensory experiences to divert attention to.

The high-CBD strain, however, produced only minimal disruption to those areas of the brain, even though it contained the same amount of THC.

Researchers said the brain disruption was strongly linked to how high or stoned the person said they were.

‘If CBD can restore disruption to the salience network, this could be a neuroprotective mechanism to explain its potential to treat disorders of salience such as psychosis and addiction,’ added another author of the study, Professor Val Curran.

The team’s research was published in the Journal of Psychopharmacology.