The efforts of the late US president George H W Bush to maintain peace and stability in the Gulf region almost three decades ago... 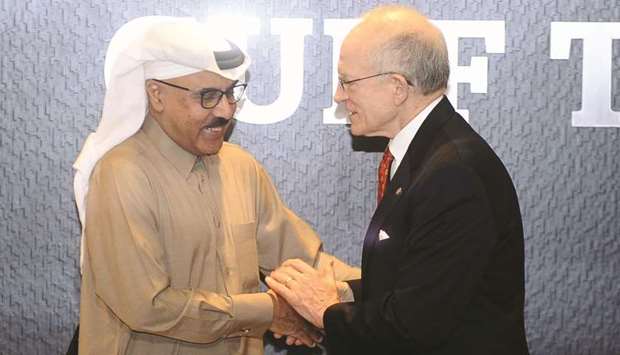 The efforts of the late US president George H W Bush to maintain peace and stability in the Gulf region almost three decades ago were remembered at a meeting attended by members of the Qatar Harvey Fund (QHF) Advisory Board yesterday in Doha.
During the meeting, Gulf Times Editor-in-Chief Faisal Abdulhameed al-Mudahka said Bush and other US leaders were keen to maintain peace and stability in the region.

“We believe that the late George H W Bush was a hero for responding to Saddam Hussain’s invasion of Kuwait in 1990 during the first Gulf war. He played a very big role at that time in saving this region,” he said.

“And as Qatar, we see ourselves as a small nation like Kuwait surrounded by our neighbours that have the same uncivlised way of dealing with us,” he continued, referring to the unjust  blockade imposed on Qatar in June 2017.
Al-Mudahka also recalled Qatar’s efforts to overcome the challenges wrought by the siege on the country’s economy, especially on its citizens and Qatar’s large expatriate community.

“Notwithstanding the blockade, the visionary and wise leadership of His Highness the Amir Sheikh Tamim bin Hamad al-Thani helped Qatar move forward and accomplish many milestones in areas, such as food security, self-sufficiency, and legal and economic reforms, among others,” al-Mudahka pointed out.

Dr Hassan Mohamed al-Ansari, Editor-in-Chief of Qatar Tribune, who was also present at the meeting, emphasised that the blockade “did not have any impact on the Gulf Co-operation Council (GCC)” as a regional bloc.
“I think the GCC is a very good idea in terms of having an identity…the people in the Gulf started to feel that they are part of this region and they are close to each other. Despite negative propaganda, many people started to think about this, and besides we are all family.
“I am a believer in the GCC…it is a regional security – a collective effort that should be kept because I just don’t see any future for those small states…we have to learn that the Gulf is big for everybody,” he said.

Al-Mudahka also reiterated Qatar’s continuous support for the Qatar Harvey Fund Advisory Board, including media-related assistance from Gulf Times. Qatar donated $30mn for the long-term recovery of the storm’s victims in Texas in response to the damage wrought by Hurricane Harvey in August 2017.

“The QHF, which is chaired by Qatar’s ambassador to the US, Sheikh Meshal bin Hamad al-Thani, was created to administer the gift and serves as a commitment to solidarity between the people of Qatar and the people of Texas,” according to the QHF Advisory Board.