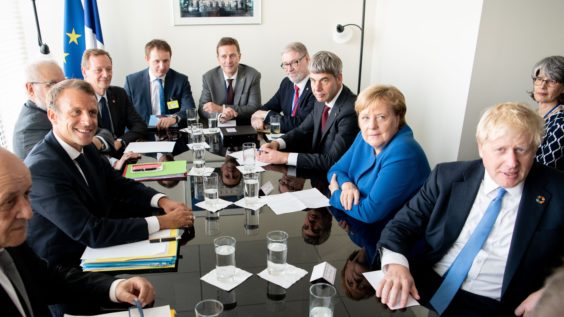 British Prime Minister Boris Johnson, French President Emmanuel Macron and German Chancellor Angela Merkel issued a joint statement saying they have sided with Washington and Riyadh in blaming Iran for crippling September 14 attacks on Saudi oil facilities. “It is clear for us that Iran bears responsibility for this attack. There is no other plausible explanation,” the statement said. The three agreed to their joint stance on Monday at a tripartite meeting in New York, where they are participating in the opening session of the 74th UN General Assembly. Iran denies having been behind the attack, which was carried out with missiles and drones, temporarily halving overall Saudi oil production. Iranian Foreign Minister Mohammad Javad Zarif responded to the European statement with a tweet: “E3’s paralysis in fulfilling their obligations w/o US permission has been clear since May 2018 … No new deal before compliance w/ current one.” He was referring to efforts by London, Paris and Berlin to help Tehran sidestep crippling US sanctions imposed after Washington dropped out of a 2015 multilateral agreement aimed at preventing Iran from becoming a nuclear power.