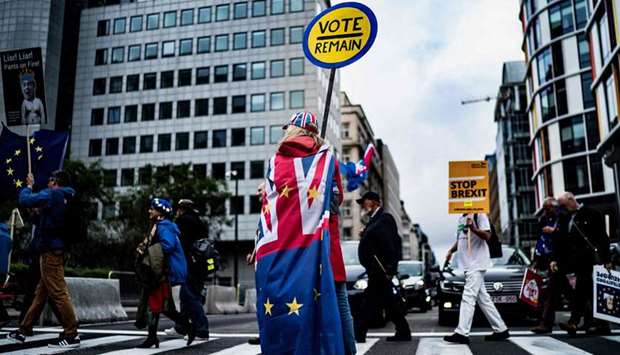 Britain and the European Union yesterday agreed to hold last-ditch talks aimed at securing a Brexit deal with just days left to thrash out an agreement, as each side trades accusations of a failure to compromise.
Brexit Secretary Steve Barclay will meet his EU counterpart Michel Barnier in Brussels today in an attempt to break the impasse before an October 17-18 summit.
“We’ve put forward serious proposals and have been willing to be flexible. Now it’s time for the EU to do the same,” Barclay tweeted.
But Barnier appeared more downbeat, playing down hopes of a breakthrough before EU leaders meet, even as he promised to work around the clock to the deadline.
He said the EU could not accept Britain’s proposals as they stand, arguing they would undermine peace and weaken the European single market.
“As I speak to you now, we’re not on the point of envisioning and finding a deal,” he told the European Parliament.
Britain is due to leave the EU on October 31, more than three years after a landmark referendum that has dominated domestic politics and divided the nation.
Prime Minister Boris Johnson has promised to take the country out of the bloc after nearly five decades of integration — with or without a withdrawal agreement.
On Tuesday, Downing Street sources broke diplomatic protocol by leaking details of a private conversation between Johnson and German Chancellor Angela Merkel.
Merkel was alleged to have said a deal was “overwhelmingly unlikely” without further UK compromise on its plans to keep open the border between EU member Ireland and the British province of Northern Ireland.
Berlin declined to give details of the call but an irate European Council chief Donald Tusk accused Johnson of playing a “stupid blame game” and jeopardising the future of both Britain and the EU.
Johnson will meet his Irish counterpart Leo Varadkar today, with few signs Dublin is prepared to move on its position about border arrangements.
Finding a way to keep the frontier between north and south open without Northern Ireland being tied to EU trade rules has long been the main sticking point in talks.
The prospect of a hard border has raised fears that it could reignite unrest between pro-Irish republicans and unionists that killed thousands over three decades from the late 1960s.
Ireland on Tuesday announced it had set aside 1.2bn euros ($1.3bn) in its 2020 budget as a contingency for no-deal, which has been seen as a sign of its pessimism about the talks.
Varadkar said it would be “very difficult to secure an agreement by next week”.
Barnier said Britain’s proposals “would replace a practical, operational and legal solution with a solution that is hypothetical and provisional”.
Anti-Brexit campaigners in Britain believe Johnson, who took over as PM from Theresa May in July, is using the EU talks to play a political game to cement his credentials as a eurosceptic leader.