Media playback is unsupported on your device Theresa May will make a direct plea to EU leaders later asking to postpone Brexit for three... 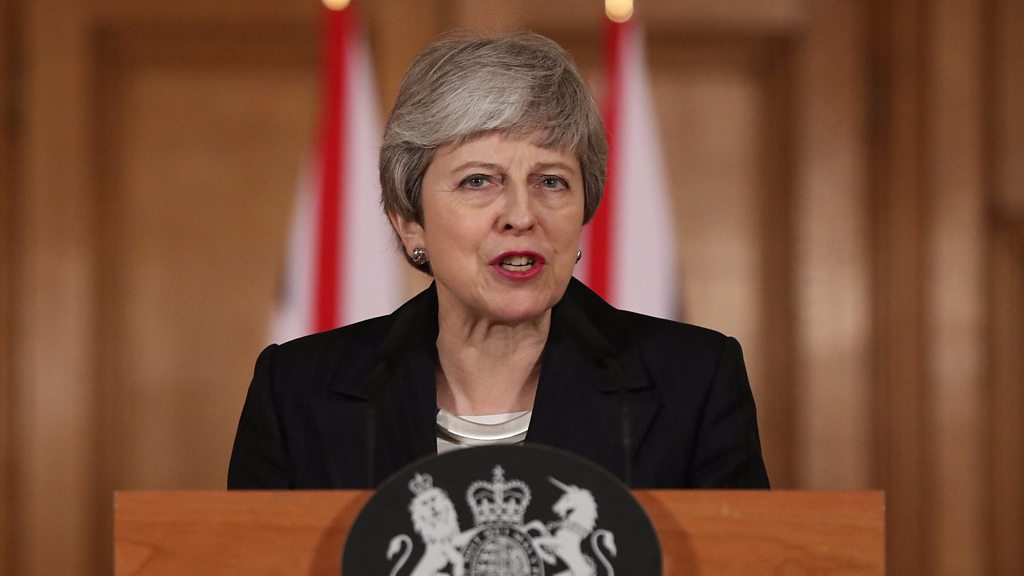 Theresa May will make a direct plea to EU leaders later asking to postpone Brexit for three months, hours after telling the British public a delay was “a matter of great personal regret”.

At an EU summit in Brussels, she will try to persuade the other 27 countries to delay the UK’s exit beyond 29 March.

On Wednesday, the PM made a speech blaming the delay on MPs and telling the nation she was “on their side”.

Meanwhile, Jeremy Corbyn is also due in Brussels for separate Brexit talks.

EU leaders are expected to arrive at the two-day summit from 13:00 GMT.

The BBC’s Europe correspondent Kevin Connolly said the EU side “appears to hold all the aces” at the summit, with some countries including France “sceptical of the value of making an offer” of an extension.

How the day will unfold (timings are approximate):

Speaking in the German Parliament, Angela Merkel said the EU could meet Mrs May’s request to delay Brexit if in the next week there was a “positive vote” on the withdrawal agreement in the UK Parliament.

The German Chancellor said European elections at the end of May would have to be considered during discussions on the suggested extension deadline of 30 June, adding: “But of course we can certainly talk about a short term extension.”

The UK is set to leave the EU next Friday unless the law is changed. The current default position for leaving is without a withdrawal agreement.

Mrs May agreed a deal with the EU, but MPs have rejected it twice.

She has asked the EU for a short extension of the two-year Brexit process until 30 June, but any extension needs to be agreed to by all EU members.

European Council President Donald Tusk said he believed the EU would agree to a short extension, but this would only be if Mrs May’s deal is signed off by MPs next week. Another EU summit next week could be called in an emergency if needed, he said.

Mr Tusk said the “question remains open” as to how long a delay the other EU leaders would support.

But, in her speech from Number 10, Mrs May insisted she would not be willing to postpone Brexit any further than 30 June, despite appeals from some MPs.

She added: “Of this I am absolutely sure. You, the public, have had enough.

“You are tired of the infighting, tired of the political games and the arcane procedural rows, tired of MPs talking about nothing else but Brexit when you have real concerns about our children’s schools, our National Health Service, knife crime.

“You want this stage of the Brexit process to be over and done with. I agree. I am on your side.”

She said it was now up to MPs to decide whether they wanted to leave with her deal, no deal or not to leave at all. But she warned that the latter option could cause “irreparable damage to public trust” in politicians.

Theresa May has pitched herself against Parliament and on the side of the people.

It’s true that No 10 believes strongly that swathes of the population have simply had enough of Brexit.

The way it drowns out other public concerns, the way its processes, contradictions and clamour have wrapped their way around the normal workings of Westminster – remote at the best of times and downright bizarre at the worst.

But, when it is MPs the prime minister needs to get on side if she is to have a real chance of finally getting her deal through next week – third time extremely lucky – the choice of message was not without risk.

Labour leader Jeremy Corbyn is also heading to Brussels, where he will meet the EU’s chief Brexit negotiator, Michel Barnier, and the leaders of seven European countries to discuss alternatives to Mrs May’s Brexit plan.

He said Mrs May was “in complete denial about the scale of the crisis” facing the country and was “unable to offer the leadership the country needs”.

Her speech also sparked an angry response from MPs across the House of Commons, with some calling her comments “toxic” and “reckless”.

There was a strong reaction to Mrs May’s speech on Wednesday evening.

Labour’s Lisa Nandy described Mrs May’s statement as “disgraceful” for “pitting Parliament against the people”, while fellow Labour MP Wes Streeting added it was “incendiary and irresponsible” at a time when some MPs had received death threats.

Pro-EU Tory Sam Gyimah, who quit as a minister over her deal, described her remarks as “toxic” and said the “blame game” was “a low blow”.

SNP MP Kirsty Blackman said Mrs May needed to “change course or resign”, saying: “She’s had 1,000 days to try and build consensus and at every opportunity she has chosen not to do so.”

But Communities Secretary James Brokenshire said both the prime minister and the country felt “frustration” at not getting her deal through Parliament.

Mrs May met opposition leaders before her speech to discuss a Brexit delay.

Jeremy Corbyn walked out of the meeting because Labour defectors who are now members of the Independent Group turned up.

Other opposition party leaders said they were unimpressed with what they heard from the prime minister.

Conservative MP Sir Oliver Letwin said he would be voting for Mrs May’s deal but that he was keen for a series of indicative votes on the way forward for Brexit if it does not pass.

He said he believed MPs would back a “Norway plus” style deal, where the UK would stay in the single market and have a customs arrangement with the EU.