Brawl Erupted Outside A Mosque In Medina, Saudi Arabia

There were no kicks or punches pulled as a brawl erupted outside a mosque in the Saudi Arabian city of Medina, home to Islam’s... 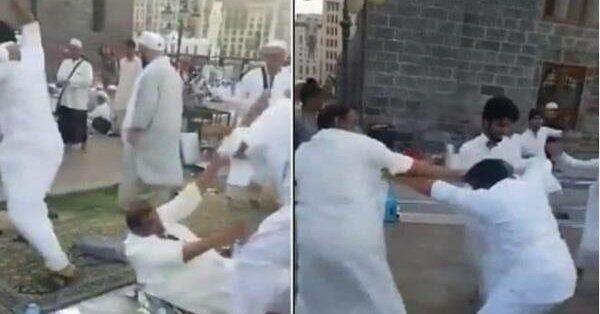 There were no kicks or punches pulled as a brawl erupted outside a mosque in the Saudi Arabian city of Medina, home to Islam’s third holiest site, between locals shortly before a public iftar gathering, the fast-breaking meal at the end of the day during the month of Ramadan.

Dramatic footage of the epic fight shared on Twitter shows the violent altercation outside the iconic Al-Ghamama Mosque, where tables and chairs had been laid out for the public meal.

In chaotic scenes, the brawlers can also be heard cursing at each other, with many visibly strewn on the floor and some attempting to lift chairs to hurl them.

The reasons for the fight was not clear but some locals on Twitter reported it started as a dispute over seating positions before the food was served.

The incident seems to have occurred last week.

Across the world, Muslims fast each day for the entire month of Ramadan, this year roughly from early May to early June, abstaining from food and drink from dawn to dusk.

That means around 15 hours without food, water, cigarettes or caffeine in some countries.
Fasting is aimed at drawing worshippers closer to God through self-control, remembrance and humility. The challenge of fasting for many is also a chance to reset spiritually and physically, kick bad habits and purify the heart.

During the day, Muslims must also abstain from sex, gossip and cursing, and are encouraged to focus on meditative acts like prayer, reading the Quran and charity.

But it seems the brawlers outside the mosque did not get that memo.