Having the courage to pursue bold ideas is one of the most important traits of successful filmmakers, 2019 Qumra Master Eugenio Caballero told a... 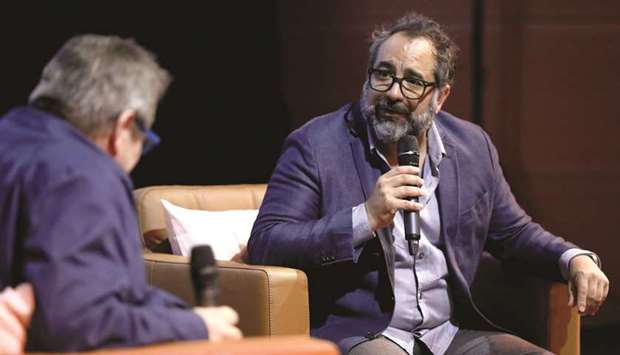 Having the courage to pursue bold ideas is one of the most important traits of successful filmmakers, 2019 Qumra Master Eugenio Caballero told a packed audience of emerging filmmakers in Doha yesterday.

At the second Masterclass at the fifth edition of Qumra – the annual industry event by the Doha Film Institute (DFI) that aims to nurture the talents of first and second-time filmmakers – the Academy Award winning production designer provided an overview on the importance of shape and colour in films through his work on: Pan’s Labyrinth (2006), The Impossible (2012), The Limits of Control (2009), A Monster Calls (2016), and Roma (2018).

Caballero said: “A production designer’s role is to realise the director’s vision. You need to conceptualise and contribute your artistic ideas and creativity to the unique world of the film. To do this well, you need to be brave and really embrace your own storytelling abilities. It’s vital that you believe in what you are doing”.

Equally important in the filmmaking process, according to Caballero, are communication and planning. Caballero told his Masterclass audience how he led a team of 600 people during the production of JA Bayona’s The Impossible (2012), and the challenges involved in large scale productions.
“As a production designer, you are responsible for supporting the director and their vision for the film. To do this, you need to be a really good communicator and be clear with your crew about what it is that you want and how to make it happen.”

Another key factor in Caballero’s approach to his craft is rigorous planning. He shared examples of intricate drawings and physical miniatures of film sets he has worked on as well as the colour palettes of his previous work on films such as Roma, The Impossible and The Limits of Control.
“When I work on a film, the first thing I work on is conceptualisation. Then, I take into consideration the practicalities involved in different set locations, physical spaces, and technology. It is like assembling a puzzle and the planning phase can take many months before shooting starts.”
Caballero’s final words of wisdom to the audience had to do with working with small budgets: “If you are not able to invest in building a large-scale set, you need to get closer to the action through careful camera work.”

Their role is to share their insights with the young talent attached to 36 Qumra Projects by providing invaluable feedback on projects in consultation sessions and highlighting their own inspiring journeys through the cinematic world in Masterclasses. The fifth edition of Qumra brings together more than 150 acclaimed filmmakers, industry professionals and experts to nurture the 36 projects by first and second-time filmmakers in various stages of development.

The six-day event, which concludes on Wednesday, takes place at Souq Waqif and the Museum of Islamic Art, and features Qumra Talks and screenings in the Qumra Masters and New Voices in Cinema series, alongside the Qumra Masterclasses.