Bernd Wiesberger shot up the Race to Dubai Rankings after sealing his fifth European Tour title following an epic final round battle with Scotsman... 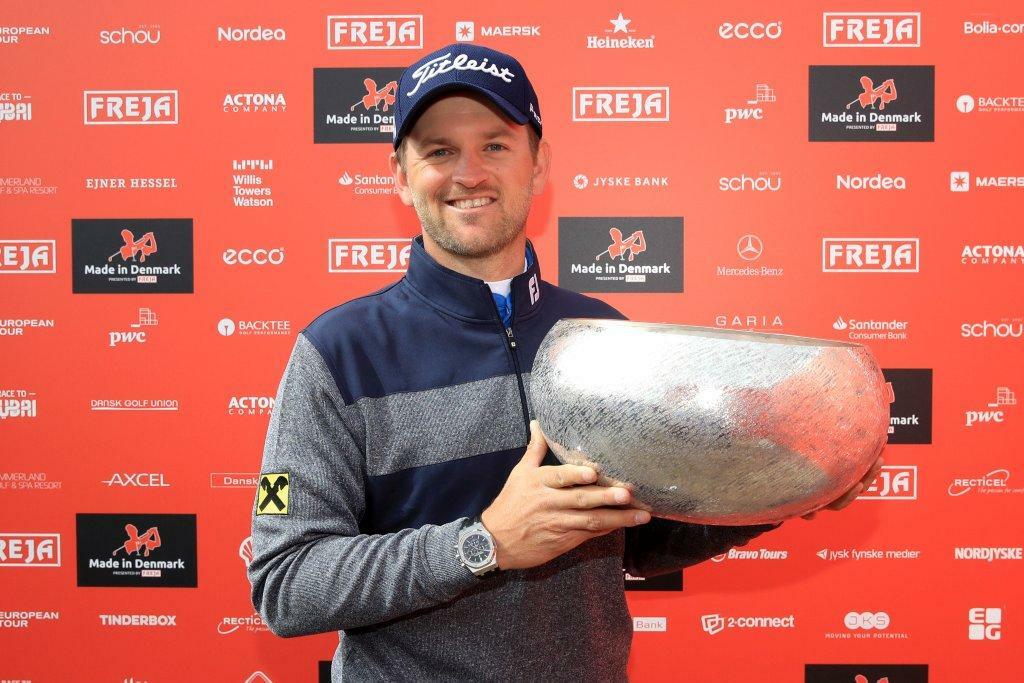 Bernd Wiesberger shot up the Race to Dubai Rankings after sealing his fifth European Tour title following an epic final round battle with Scotsman Robert MacIntyre at the Made in Denmark presented by FREJA.

The Austrian, who missed seven months of action last year due to a wrist injury, started Sunday a shot clear of MacIntyre but the pair produced some stunning golf which left them level after 15 holes. Wiesberger birdied the 16th following a wonderful tee shot while McIntyre’s bogey on the 17th handed the 33 year old a two shot advantage heading to the last. The 2017 Shenzhen International winner sealed his first victory in two years on the last despite a bogey after his playing partner could only make par.

“I’m over the moon. It’s been an emotional couple of days, but it’s been great playing well over here and getting back into the winner’s circle after a couple of hard months,” said Wiesberger, who leapfrogs from 129th to 19th on the Race to Dubai Rankings after picking up 710 points to put him in a commanding position for a seventh appearance at the season-ending DP World Tour Championship.

“I’ve not looked at a single leaderboard all day other than ours. I thought the way we played there was virtually no chance that someone could get close, especially after 15 holes or so it was just like one on one.

“I got up on him (MacIntyre) a couple at 16 and 17 but that takes nothing away from his amazing performance this week. He played so well a couple of weeks ago in Hillside as well and he’ll get one very soon, I told him that. It was a very good experience being in that match play situation.It’s been such a great week here, I’ve enjoyed myself so much. I’ve loved the way I’ve started playing.”

MacIntyre, who graduated to the European Tour this season after finishing 12th on the Challenge Tour Rankings, finished one shot back at Himmerland Golf & Spa Resort to finish runner-up for the second successive tournament. The 22 year old collects 472 points which sees him climb from 37th to 13th in the Race to Dubai.

Meanwhile, Romain Langasque, who earned his European Tour card at last year’s Qualifying School after narrowly missing out on promotion from the Challenge Tour, carded an impressive final round five under par 66 to finish in third place. The Frenchman now has four top tens this season and moves up to 21st from 33rd in the Rankings after receiving 266 points.

Pablo Larrazábal moved up 15 places to 30th on the Rankings after collecting 154.9 points after finishing in a share of fourth place along with Chris Paisley, Oliver Wilson, Max Schmitt and Paul Dunne.

English duo Wilson and Paisley climb up to 36th and 65th respectively while Irishman Dunne moves to 62nd from 101st. Schmitt makes the biggest move of all as he jumps up 60 places from 154th to 94th in the Rankings.

The top 50 players in the Race to Dubai Rankings will contest the season-ending US$8million DP World Tour Championship at Jumeirah Golf Estates in Dubai from November 21-24 where US$3 million will be up for grabs for the winner, making it the richest prize in world tournament golf.