LONDON (AP) — Making the long walk from the Stratford train station through a mall and to Olympic Stadium, fans headed to the first... 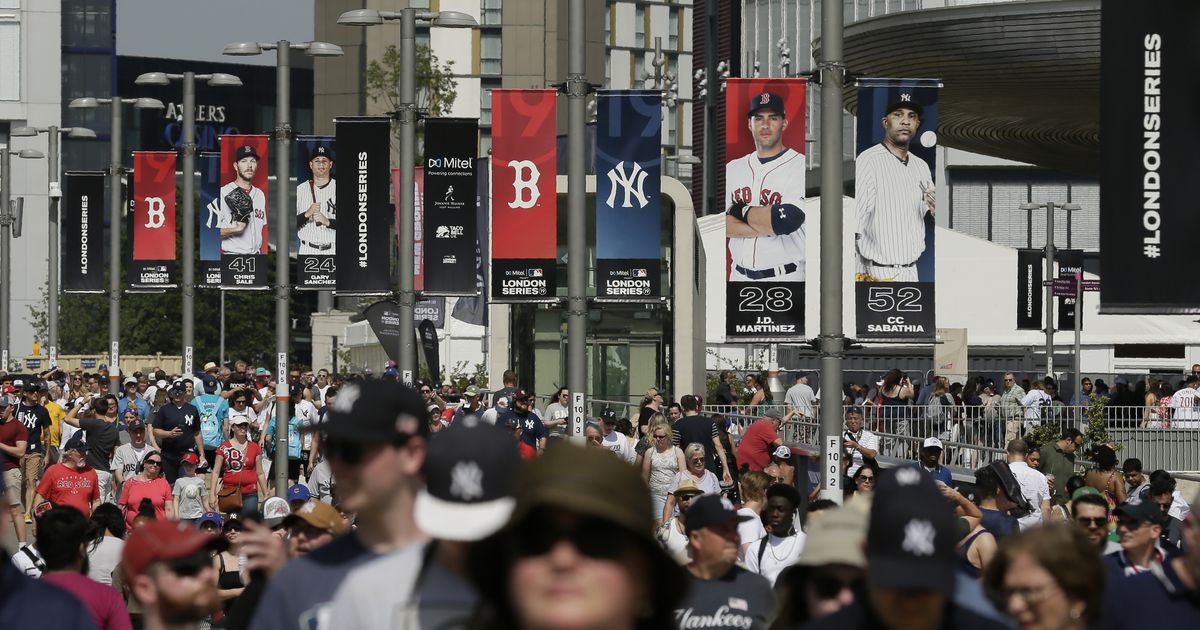 LONDON (AP) — Making the long walk from the Stratford train station through a mall and to Olympic Stadium, fans headed to the first Major League Baseball games in Europe passed retailers filled with gear from Premier League clubs. Next on the route was a tented pop-up outlet brimming with merchandise from the New York Yankees and Boston Red Sox. And right by the ticket windows near the gates was the claret-and-blue stadium store of West Ham.

Baseball is trying to muscle in on a crowded marketplace dominated by soccer but also filled with cricket, rugby — and this month Wimbledon, whose purple-and-green shirts, bags and caps become a constant current of color through the streets and the Underground.

“It’s probably quite hard for them to catch attention,” said House of Commons Speaker John Bercow, familiar with competition for recognition both in Parliament and at sports venues, “but I think it’s becoming less hard because more and more people have got access to a television that enables them to watch an American football match and possibly a baseball match. So I think that those audiences are going to grow.”

Author of a book ranking the top men’s tennis players and an Arsenal season ticket holder, Bercow has watched the NFL establish itself in London and now baseball trying to break though. The Yankees and Red Sox were dispatched across the pond as an attention-getter, a purpose pitch designed as a wakeup by a sport that grew up in the United States and has gained traction in Latin America and Asia but has been largely disregarded in Europe and Africa.

On television and in tabloids the games were secondary to EPL transfer news, the progress of Phil Neville’s Lionesses through the Women’s World Cup and the Cricket World Cup, which makes 4½-hour baseball games seem like instant gratification. MLB said 70% of the 118,718 tickets at Olympic Stadium were sold to people in the United Kingdom, though accents in the stands sounded closer to a 50-50 split.

“Baseball’s a lot more civilized than football. I think the kind of fans who go to baseball games, it’s a much more gentlemanly sport than football,” Anna Naylor, a 25-year-old from Essex, said during batting practice at last weekend.

Used to rowdy Premier League fans and intense intra-city rivalries in London, Manchester and elsewhere, she prefers the ambiance of baseball.

“It’s a bit more of a family game, and it’s a day out,” said her friend Jennie Taylor, a 26-year-old from Huddersfield. “Tennis is a bit more seasonable, where I just love the atmosphere here, and it’s fantastic that the baseball has come to London. … Rugby’s a little bit more of like a class thing in the UK, whereas every time when we go to Boston or New York, you can tell the whole city is behind one team.”

A day after the two-game series, many fans in Yankees and Red Sox caps were strolling the grounds of All England Club to watch the first day of the Wimbledon, where they mixed with women in floral dresses and men in blazers along with fans in T-shirts and shorts, many sipping Pimms.

Michael Janis, a 44-year-old from Westport, Connecticut, attended one of the baseball games and then the tennis along with his wife Elizabeth, 47.

“In small doses it would work just fine,” he said of baseball, adding the NFL had the better chance of becoming a big deal in London because of its eight-game home schedule. “You could sell a season ticket to that, but how many baseball games are British people going to watch before the novelty wears off?”

Jessica Craske, a 28-year-old Londoner who was picnicking at Wimbledon, said her friends had been talking about the baseball. Amenities provided to fans are an attraction, especially given the relatively Spartan facilities in England.

“It’s a cool day out, not just to watch the sport itself but to be in the atmosphere of an American sports game,” she said.

Tottenham’s new home that opened in April, London’s fifth stadium of 60,000 or more seats, is changing the fan experience. With dozens of food and bar options, it is remaining open for two hours after day games and until 11 p.m. after night matches.

“I’m not sure you can replace White Hart Lane, because that was a ground that we all grew up with and we all loved. I’ve got lots and lots of memories at White Hart Lane. But things move on, country moves on, clubs have got to move on, as well,” Dave French, a 55-year-old Spurs supporter and former supervisor at the old stadium, said after climbing to row 82 of the single-tier south stand before the match against Huddersfield. “In the old ground, we had food and drink but there was just never enough. And it was never quick enough.”

Baseball fits into the mode British soccer fans are used to with a culture and likely behavior more akin to a Premier League grounds than the crowd at a tennis match. Bercow, familiar for his shouts of “Orrrrrderrrr!!” to unruly Members of Parliament, has perspective as the author of “Tennis Maestros: The Twenty Greatest Male Tennis Players of All Time” and as an Arsenal season ticket holder.

“Football fans are more tribal. And I would say on the whole if a team is playing really badly, the team’s supporters can be more unforgiving than in tennis in my experience,” Bercow said. “If they think it’s a really poor performance either collectively or individually they can and often do vent their displeasure or even vent their displeasure at the manager if they think that the team selection has been wrong. That display of irritation or discontent or disapproval of a tennis player’s bad day doesn’t really manifest itself.”