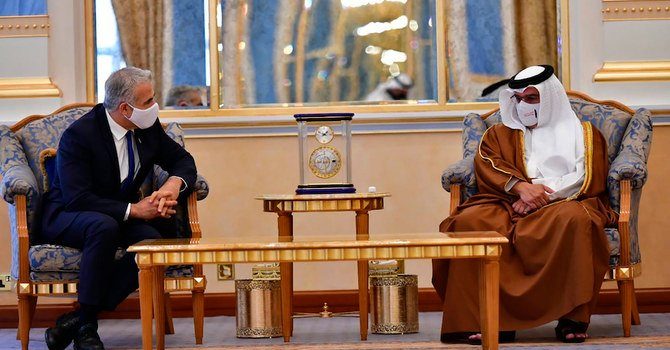 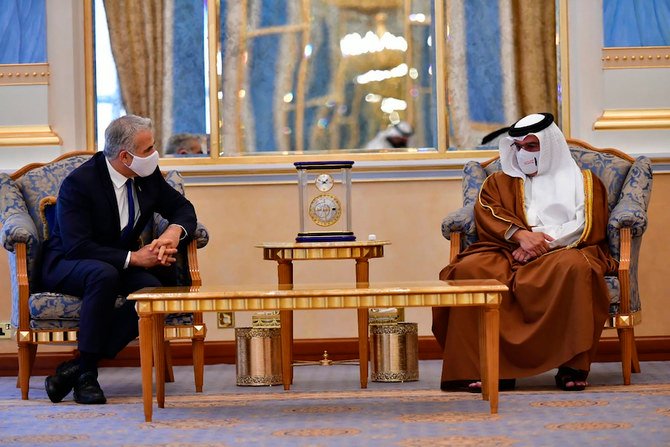 Bahrain and Israel signed a US-brokered agreement, known as the Abraham Accords, last year, along with the UAE, Sudan and Morocco, formally normalizing relations with the Jewish state.

King Hamad welcomed the opening of the Israeli embassy in Manama and said the signing of the agreements “is an important historical achievement on the road to achieving a just, lasting and comprehensive peace in the Middle East and meeting the aspirations of its peoples for security, stability and prosperity,” Bahrain News Agency reported.

He also said peace is a strategic option for Bahrain, and that the kingdom’s vision and approach are based on strengthening the values of understanding, dialogue, cooperation, peaceful coexistence, tolerance and rapprochement among peoples.

King Hamad said his country is keen to support all efforts to achieve peace, stability and development in the interest of all.

During the meeting at Sakhir Palace, the king thanked the US for its role in reaching peace agreements and its efforts to advance peace efforts in the region for a more prosperous and stable future.

“His Majesty’s leadership and inspiration have led to true cooperation and our meeting outlined the path forward for our relationship,” Lapid said on Twitter after meeting the king.

“We talked about the cooperation between our countries and about taking the official peace between us and turning it into an active, economic, security, political and civic friendship,” Lapid tweeted following his sit-down with Al-Zayani.

Al-Zayani and Lapid also held a news conference, during which they signed a number of memorandums of understanding — ranging from cooperation in environmental conservation to sports.

“Your visit builds on the considerable progress we have already made… and underlines once again our shared desire to spread peace, stability, and cooperation across the Middle East and achieve genuine and lasting security and prosperity for its peoples,” said Al-Zayani.

Bahrain reaffirmed its commitment to the two-state solution to the Israeli-Palestinian conflict, he added.

Lapid said that he too was “a devoted supporter of the two-state solution” but stressed he was not speaking on behalf of the government.

“I think it’s the right solution for the people of Israel and the Palestinians as well. Not everyone in our government thinks the same,” he said.

He also said that the opening of embassies “will symbolize diplomatic cooperation between us.”

“Our opportunities are shared. Our threats are also shared, and they aren’t far from here,” Lapid said in remarks to reporters, apparently alluding to Iran.

Touring the Bahrain headquarters of the US Navy’s Fifth Fleet, which has faced off Iranian vessels amid tensions over Tehran’s regional aims, Lapid said: “Our three countries work together because we have similar interests in the region.”

“When we speak about peace, we need to remember that peace must be protected from those who would harm it,” he added, according to his office.

The Fleet said on Twitter that Lapid and his hosts discussed regional maritime security cooperation.

Lapid’s office said he and his Bahraini counterpart signed deals on cooperation in medicine, health care, sports, and on water and environmental conservation. Lapid also inaugurated Israel’s embassy in Manama.

An Israeli Foreign Ministry spokesperson said: “We see Bahrain as an important partner, on the bilateral level but also as a bridge to cooperate with other countries in the region.”