Bahrain Will Not Allow to Close the Strait of Hormuz

Bahrain’s Foreign Minister, Sheikh Khalid bin Ahmed Al Khalifa, warned Iran against “walking towards the abyss”, stressing that it “will not be allowed to... 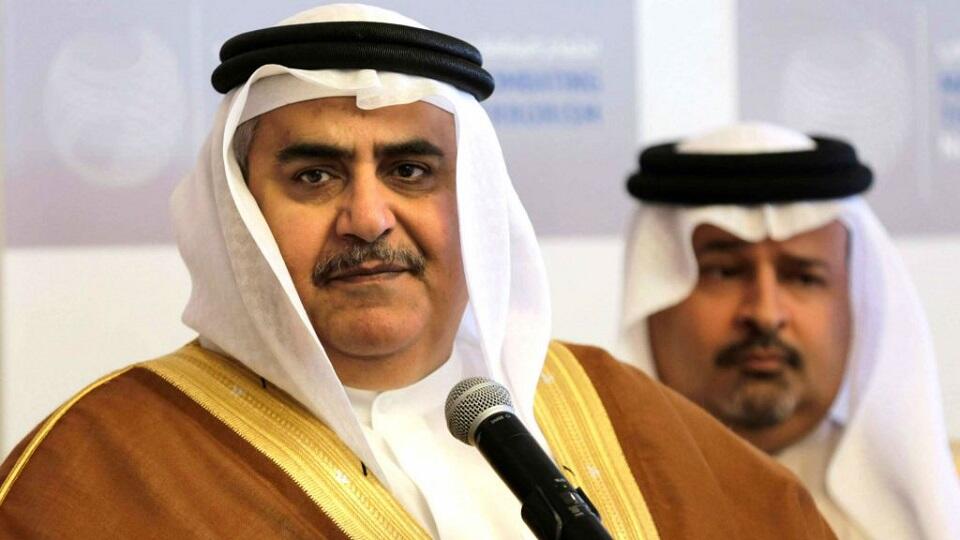 Bahrain’s Foreign Minister, Sheikh Khalid bin Ahmed Al Khalifa, warned Iran against “walking towards the abyss”, stressing that it “will not be allowed to close for one day the Strait of Hormuz,” as the country had warned after the tightening of US sanctions against it.

In an interview with Asharq Al-Awsat in Paris, Sheikh Khalid said: “Iran made major mistakes when it intervened in the affairs of the countries of the region and sent its money, weapons and militias. The current situation is caused by the nuclear agreement that Washington withdrew from. That agreement dealt with Iran’s nuclear program and left aside its ballistic programs… and the policy of Iranian hegemony.”

“As these issues have not been resolved, Iran continued with its practices, threatening to close the Strait of Hormuz. But the country knows that the closure means self-defeating,” he added.

The Bahraini foreign minister underlined that Iran should reconsider its policies towards the region and the United States.

“We see an opportunity for Tehran to review its policy, which had so far brought it to the brink of the abyss,” he affirmed.

Asked about Iranian threats to close the Strait of Hormuz in response to the tightening of US sanctions against it, Sheikh Khalid said: “This is a blunt threat to all Gulf states. I still believe that Iran might think thoroughly before taking such a step because it would be a dangerous escalation that would not be allowed to last for even one day.”

Sheikh Khalid, who is accompanying King of Bahrain Sheikh Hamad bin Isa Al Khalifa on an official visit to Paris, said that Bahrain and France had converging views on the situation in Syria.

“Along with France, we are looking for a political solution that would achieve the aspirations of the Syrian people and would be based on the Geneva I statement and the relevant international resolutions,” he noted.

The Bahraini minister added that discussions also touched on the responsibility of the world’s major powers, including France, to restore stability to Syria.

“For our part, we have stressed the need for Iran and other regional countries to withdraw from Syria, in order to allow capable powers of restoring stability in the country,” he underlined.

“In addition, there is an Arab role that should be noted. It was launched a few months ago in New York at the initiative of five Arab countries: Egypt, Saudi Arabia, the UAE, Bahrain and Jordan. These countries have sought not to guarantee the return of Syria to the Arab League because this may be premature… but to resolve the Syrian crisis through a joint Arab action, which was absent throughout this period and allowed other regional parties to intervene,” the minister explained.

As for the return of Syria to the Arab League, Sheikh Khalid noted that this issue would be decided by the organization at the appropriate time.

“There is a need for consensus among the Arab countries, and contact with Syria in this regard. To date, this consensus is not available,” he stressed.

Sheikh Khalid went on to say: “I am very cautious about the political solution, and I think that the Syrians are the ones who can deal with it. Humanitarian issues, such as the return of displaced persons to their homes, could be one of the steps that would foster a climate for an effective political solution. But putting it as a precondition is up to the big powers.”

Asked about any possible end to the Gulf crisis with Qatar, the Bahraini foreign minister said: “The matter is in Qatar’s hands. Our countries have taken steps to block the damage and there is no blockade of Qatar. We are closing doors to repel the damage because Qatar does not respect the agreements.”

“We have not seen a Qatari desire to end this crisis; if it prefers to keep it, we will not lose anything,” he emphasized.

Sheikh Khalid ruled out any US intervention in this regard, but only a Kuwaiti mediation.

“There is the Kuwaiti mediation and the issue must be resolved within the GCC; and if the world wants to solve it, let it be in the hands of the GCC countries even if it takes a long time,” he remarked.

The minister stressed that Qatar was aware of the dangers of its policy against Gulf countries, such as the presence of Turkish forces and its support of “hostile Islamist movements” in the region.

On the Palestinian cause, Sheikh Khalid bin Ahmed Al Khalifa said that his country was committed to the Arab Peace Initiative, “which endorses the legitimate demands of the Palestinians.”

“We seek peace, but there will be no peace at the expense of the legitimate rights of the Palestinian people,” he noted, in response to a question about the US peace plan, which is expected to be announced at the end of the holy month of Ramadan.

As for attempts by Israeli Prime Minister Benjamin Netanyahu to normalize relations with Gulf countries, through visits to a number of Arab states, the Bahraini foreign minister said: “Netanyahu’s visit to Oman is a bilateral matter; we did not know what it was about. The question of the participation of Israeli delegations is our responsibility. If we want to host international conferences where Israel is a member, we cannot close the door to the Israelis.”

On the recent tension with Iraq, the minister called on the Iraqi government “to adhere to its aspirations to revive its relations with the Arab countries and to preserve and protect them.”