“I haven’t seen my brothers in nine years now.”

Sepehr Atefi left Iran in 2009 when he was just 20 years old. Like many members of the Baha’i faith, Atefi grew up witnessing family and friends suffer from arbitrary detentions, shop closures and harassment on a habitual basis.

“You can’t be a teacher, work in the government or run a restaurant because the [authorities consider] Baha’is ‘ritually unclean,’” according to Atefi, who now lives in Germany and who recently shared his experience of life in the Islamic Republic with The Media Line.

“I couldn’t attend universities in Iran because of my beliefs,” he revealed, saying that his and other Baha’i friends’ college entrance exams were automatically marked “incomplete.”

Because of difficulties accessing higher education in Iran, in 1987 the Baha’is established their own university, the Baha’i Institute for Higher Education (BIHE). Many Baha’is attend the BIHE and then go on to pursue graduate degrees in Europe and North America.

According to recent unofficial figures, more than 300,000 members of the Baha’i faith currently reside in Iran’s capital city of Tehran as well as in the northern city of Semnan.

The Islamic Republic’s constitution recognizes Islam, Christianity, Judaism and Zoroastrianism as official religions, but not the Baha’i faith.

The religion formed as an offshoot of Shiite Islam in the mid-19th century when adherents began to follow a merchant known as the Bab, who claimed to have received a divine revelation that a new prophet would arise (which they believe to be Bahá’u’lláh). Because the Baha’i prophets emerged after the time of Muhammad, whom Muslims consider God’s final messenger, they view the Baha’i faith to be heretical.

Now 29-years-old, Atefi says he left Iran on his own following the 2009 Iranian presidential election when the Green Movement, a political campaign which saw thousands of protesters call for former Iranian president Mahmoud Ahmadinejad to be removed from office, arose.

“I was part of a human rights organization that had a website with reports of human rights abuses in Iran called the Committee for Human Rights Reporters (CHRR),” Atefi recounted. “There were three or four Baha’is in this group.… Being a Baha’i and also being a human rights activist … is doubly [dangerous].”

Atefi and several of his friends who were also members of the CHRR decided to flee the country when the Iranian authorities began to clamp down on the organization and hundreds of activists associated with the Green Movement.

“I can’t go back to Iran,” Atefi noted, saying he had received a legal summons letter notifying him that he would be sent to the notorious Evin Prison, where the Iranian regime sends many of its political prisoners, if he should ever choose to return.

The persecution of Baha’is in Iran may well be getting worse, according to human rights groups.

“Widespread and systematic attacks continue to take place against the Baha’i minority, including arbitrary arrests and imprisonment,” Mansoureh Mills, an Iran researcher at Amnesty International, told The Media Line. “According to reports, in 2018 alone, authorities arbitrarily detained at least 95 members [of the Baha’i faith],” he said.

Mills highlighted other abuses, including business closures, property seizures, employment bans in various sectors, as well as the destruction and desecration of Baha’i cemeteries. However, the exact number of unlawful detentions and arrests is unclear, Mills conceded. 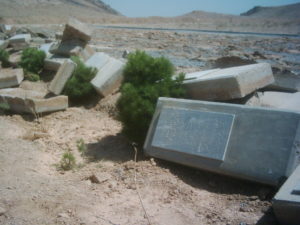 A desecrated Baha’i cemetery near Najafabad where the burial ground was reportedly bulldozed. (Reprinted with permission of the Baha’í International Community)

Tara Sepehri Far, a researcher with the Middle East and North Africa Division at Human Rights Watch (HRW), told The Media Line that Iranian authorities are arresting and prosecuting dozens of Baha’is on baseless charges in a bid to delegitimize the community.

Nevertheless, she added, “what has changed for the better is the attitude of the society and some young authorities [who are] breaking their silence about the continued harassment of Baha’is.”

Diane Ala’i, a representative of the Baha’i International Community to the United Nations in Geneva, described the situation as a form of “ongoing systematic persecution” that had “gotten worse” in recent times.

“When Baha’i children go to school they’re made fun of and ostracized,” Ala’i related to The Media Line. “The one thing Baha’is had was shops, but now the authorities are sealing them because they see they’re closed on Baha’i holidays. There are ongoing raids of Baha’i homes and they confiscate Baha’i books and arrest people and send them to prison. They’re [then] released on high bail, which is a form of extortion.” 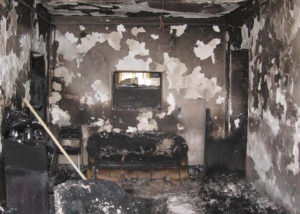 Baha’i homes have been the target of arsonists, including this one in Kerman, Iran. (Reprinted with permission of the Baha’í International Community)

Dr. Reza Parchizadeh, an Iranian-born political theorist and analyst at the Indiana University of Pennsylvania, told The Media Line that the situation for the Baha’is has significantly deteriorated in recent years.

“Since the [termination] of the nuclear deal between Iran and the P5+1 countries [the UN Security Council’s five permanent members plus Germany], the Shiite Islamist regime has felt more confident in persecuting all sorts of minorities, including the Baha’is,” Parchizadeh asserted. “At present the persecution of dissidents is at its worst in Iran.”

He also believes the regime has chosen to target the Baha’is in particular due to a sense of “existential anxiety.”

“The messianic approach of the Baha’is has its roots in the Shiite belief in the divine savior,” Parchizadeh explained. “However, unlike the Shiites, the Baha’is believe that their savior has already emerged in the world.… If the Baha’i narrative becomes the [accepted] interpretation of religion, then the Shiite mullahs and their zealous followers will have no pretext to advocate for an Islamist system…[which] paves the way for the emergence of the Mahdi [savior] at the end of the world.”

The exact population of Baha’is around the world remains unknown, though some estimate there are nearly seven million adherents. According to the WorldAtlas information website, the countries with the largest number of members as of 2010 are India (with some 1.9 million members), the United States (512,000), Kenya (422,000) and Vietnam (388,000).

Yemen’s tiny Baha’i community numbers in the thousands, but with the ongoing civil war, it has also recently started to be persecuted at the hands of Tehran-backed Houthi rebels.

“At the moment the whole Baha’i community [in Yemen] is under threat,” UN representative Ala’i remarked. “There are six Baha’is who are in prison, one who has been condemned to death and 20 others [who] are being prosecuted.”

“The rest are in hiding,” she said, arguing that Tehran was pushing the rebels to oppress the community.

In a recently released statement, US State Department spokeswoman Morgan Ortagus wrote that Washington was “deeply concerned” about the predicament of Baha’is in Yemen.

“There are credible reports that the Houthis continue to severely mistreat, arbitrarily detain, and torture Baha’is in Yemen,” he noted. “This persistent pattern of vilification, oppression and mistreatment by the Houthis of Baha’is in Yemen must end.”

Human rights groups have repeatedly called on governments, especially those in the European Union, to take the Iranian government to task for its ongoing abuses.

Despite their plight, Atefi says most Baha’is have no plans or desire to leave the Islamic Republic.

“My own family [members] have been persecuted and they don’t want to ever leave Iran,” he stressed. “They have some issues but they live there and want to rebuild the country. They want to take part in the future of Iran as well [because it’s] a holy place for the Baha’is.

“Baha’is believe in what is known as constructive resilience,” Atefi continued, referring to the non-adversarial approach the community has adopted in order to push for social change in response to oppressive policies. “If you’re Bahai and have lived in Iran, you have [relatives], friends and many people who have gone to prison. My grandfather was killed after the 1979 revolution by the [Islamic] Revolutionary Guard [Corps]. Unfortunately, these stories are in every Baha’i family.”

After fleeing his birthplace, Atefi has learned German and is now studying for a master’s degree in media arts at a local university. His parents have managed to visit him in Germany a handful of times.

“Sometimes I [wonder] if I hadn’t left Iran, what could I do now?,” he asked rhetorically. “I couldn’t have really done what I love: [to] be a filmmaker, be a journalist.

“I would be a different person.”