Australia’s election race heats up as Morrison fights back

MELBOURNE (BLOOMBERG) – Australia’s election is shaping up to be a tight race after all. A poll released on Monday (April 29) showed Prime Minister... 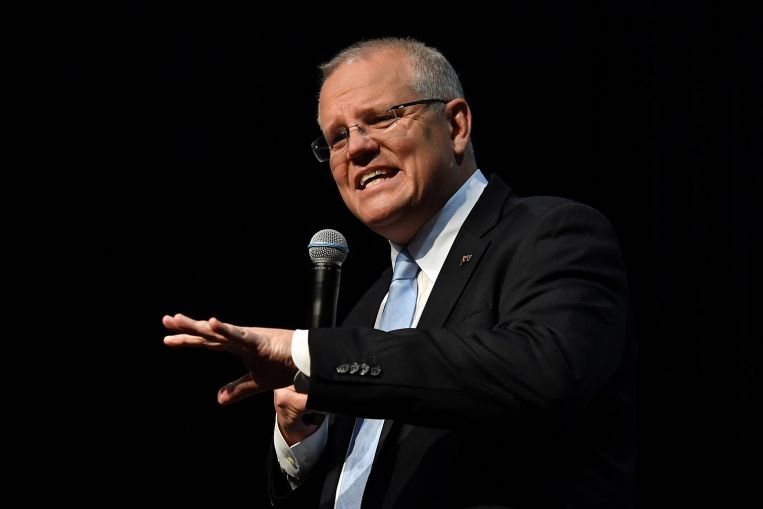 MELBOURNE (BLOOMBERG) – Australia’s election is shaping up to be a tight race after all.

A poll released on Monday (April 29) showed Prime Minister Scott Morrison’s government narrowing the gap against the Labor opposition, setting up a dogfight in the final three weeks of campaigning.

Labor leads the Liberal-National coalition 51 per cent to 49 per cent, according to the Newspoll published in The Australian newspaper, within the margin of error for the first time in months.

That’s the best performance for the government since Mr Morrison took leadership in August, even though it would still see him lose power if it’s replicated in the May 18 election.

“The poll result will give the government heart that it’s travelling in the right direction,” said Associate Professor Haydon Manning, a politics and public policy expert at Adelaide’s Flinders University.

“Before the election started, Morrison was facing a landslide defeat, so he’ll be happy he’s now in with a chance to win.”

With the five-week campaign almost at the halfway mark, both major parties are attempting to win over undecided voters by playing to their strengths.

Over the weekend, Labor leader Bill Shorten promised to spend an extra A$4 billion (S$3.84 billion) to subsidise childcare if he becomes prime minister, while Mr Morrison pledged to freeze Australia’s refugee intake for the next three years in an attempt to remind voters of his government’s commitment to border security.

While some Labor policies such as tougher action on climate change have resonated with a majority of voters, Mr Morrison has attacked Mr Shorten’s push to redistribute wealth.

The prime minister cited Labor’s plan to axe some tax perks in a bid to tackle generational inequality as proof that the Labor leader, as a former unionist, can’t be trusted to manage the economy.

Mr Morrison is vowing to implement a swathe of income-tax cuts should his coalition win a third term, and has emphasised its reputation for providing sound economic management.

Still, he’s vulnerable to opposition attacks over stagnant wages and inflation, which could trigger the central bank to cut interest rates to a record low as early as next week.

The Newspoll, conducted last Friday to Sunday among 2,136 voters, has a margin of error of 2.3 percentage points.

The two-party preferred measure uses analysis from previous elections to calculate which major parties will benefit from Australia’s complicated system of preference voting.

Still, the poll wasn’t all good news for Mr Morrison.

His coalition declined as the first choice of voters to 38 per cent, just 1 point above Labor’s 37 per cent, as primary support for both major parties fell.

The biggest beneficiary has been mining magnate Clive Palmer’s United Australia Party, which surged to 5 per cent from 2 per cent earlier this month amid a multi-million-dollar advertising spree.

Mr Palmer is self-funding a US$30 million (S$40.8 million) campaign that has seen hundreds of yellow “Make Australia Great” billboards pop up across the country.

With a thin policy agenda that includes cutting taxes and doing more to tap mineral wealth, he cut a deal with Mr Morrison that may see his party receive more support from coalition voters.

“If Clive Palmer gets into the Senate, I blame Scott Morrison,” Mr Shorten told reporters in Perth on Monday, without addressing his party’s decline.

“The only way that bloke can be on electoral life support is because the Liberal and National Party are putting him there. This is turning Australian politics into a joke.”

Mr Morrison, a former media executive, still leads as the preferred prime minister, with 45 per cent compared with Mr Shorten’s 37 per cent.

That lead is narrower than two weeks ago, when he lead by 11 percentage points.

The two leaders will square off in a televised debate in Perth later on Monday.

“By making up ground on Shorten on the campaign trail, Morrison may feel that’s he’s got his opponent’s measure,” Assoc Prof Manning said.

“With both sides’ policy agendas now on the table, it will be interesting whether they resort to negative attacks on each other to score points as the campaign enters its final weeks.”