The Solpods are a 12-panel ‘pod’ which are manufactured in Melbourne, trucked to site and lowered by crane into position with pricing beginning at...

The Solpods are a 12-panel ‘pod’ which are manufactured in Melbourne, trucked to site and lowered by crane into position with pricing beginning at $100,000 for a pod.

The startup’s launch comes as Australia undergoes a solar boom with Australian rooftops adding a record of almost 500 megawatts of new solar photovoltaic capacity in the March quarter. 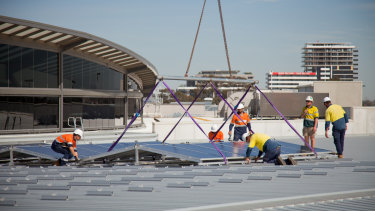 Solpod’s panels can be installed quickly and moved.

Melbourne-based Solpod has been developing its product since 2017 with more than $500,000 invested in funding alongside “sweat equity” from the founders Larratt and James Walker.

The startup has undertaken trials with ARENA, ERM Power, GPT and Property NSW.

Mr Larratt said he saw the opportunity for the startup because “in my gut” he knew the solar industry wasn’t giving customers what they wanted.

“The industry as a whole wasn’t meeting the needs of the market,” he said. “We often look at the asset operating for over 20 years but businesses can’t really commit to that, it is a very long time. Renters, in particular, are signing leases of five years.”

Solpod has a manufacturing facility in the Melbourne suburb of Dandenong and Mr Larratt said it had the capacity to be doing $50 million to $100 million worth of work.

With Solpod partner ERM Power predicting Solpod will double the size of the large rooftop solar market,  growing from 113 MW today to 215 MW by 2021, a $200 million increase. 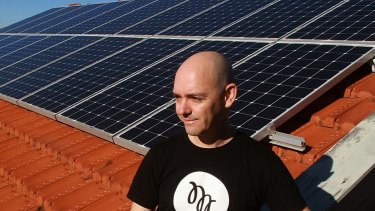 “Solpod’s new way of installing solar will pave the way for businesses who were previously locked out of rooftop solar to take up renewable energy solutions and options under shorter term power purchase agreements.”