CANBERRA, Australia — Australia will join a fledgling American-led effort to protect ships from Iranian threats in the critical Strait of Hormuz, the country’s... 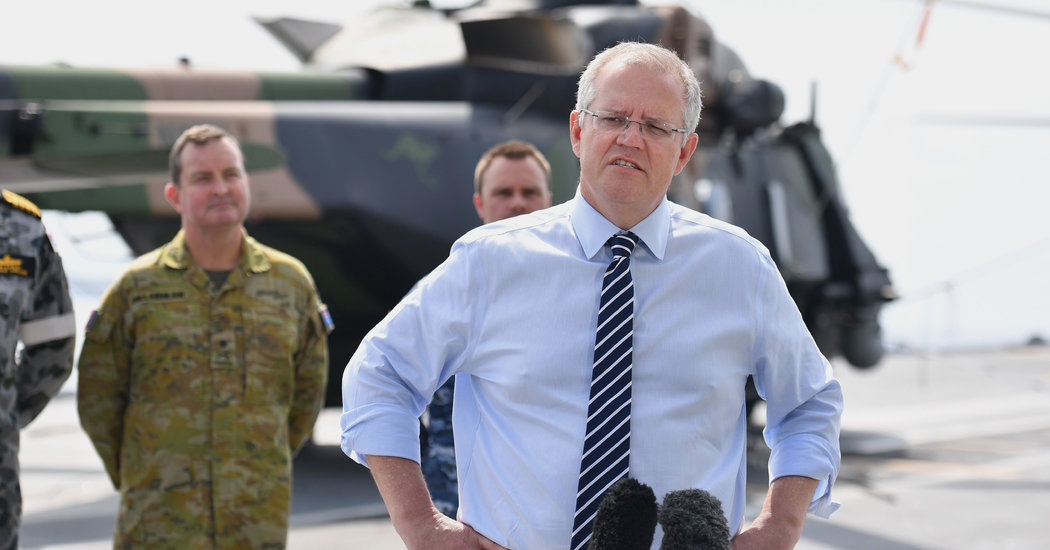 CANBERRA, Australia — Australia will join a fledgling American-led effort to protect ships from Iranian threats in the critical Strait of Hormuz, the country’s prime minister said on Wednesday, dismissing concerns that the United States was pulling Australia once again into a faraway military intervention in the Middle East.

Oil tankers crossing the waterway came under attack in May and June, with crews forced to abandon their vessels and at least one ship set on fire. The United States has blamed Iran for the attacks, a charge that Iranian officials have rejected.

The tanker strikes came after the United States abandoned the multinational 2015 agreement limiting Iran’s nuclear program and reimposed sanctions on Tehran meant to cripple its oil sales, a pillar of the Iranian economy.

So far, only two other countries have joined the United States in the ship-protection mission: Britain and Bahrain.

Britain, which hopes to salvage the 2015 nuclear deal, at first hesitated to join the effort, wanting to avoid being seen as contributing to President Trump’s “maximum pressure” campaign against Iran. But Britain later relented, after failing to assemble a separate European coalition to protect ships in the Strait of Hormuz. Iran seized a British-flagged tanker in July.

Asked if Australia’s decision contributed to the American pressure campaign against Iran, Prime Minister Scott Morrison said flatly that it did not.

“This is about freedom of shipping,” he said at a news conference. “They’re completely separate issues. And I think to conflate those issues would be ill-informed.”

A third of the world’s petroleum makes its way through the Strait of Hormuz, and Mr. Morrison portrayed the decision as an economic one.

“Fifteen to 16 percent of crude oil and 25 to 30 percent of refined oil destined for Australia transits through the Strait of Hormuz,” Mr. Morrison said. “So it is a potential threat to our economy.”

Mr. Morrison said that Australia would contribute a frigate and a surveillance aircraft, and that it would station officials at the mission’s headquarters in Bahrain.

But the assistance will be limited, Mr. Morrison said. The aircraft will not be deployed until the end of the year, he said. And the frigate, which will be stationed in the strait for six months next year, had already been headed to the Middle East for a separate mission, so it will not be diverted from any tasks closer to home in the Pacific, he added.

Mr. Morrison said he had spoken with Prime Minister Boris Johnson of Britain and the American secretary of state, Mike Pompeo, before making the announcement.

Questioned about whether Australia was being drawn into another American-led military effort in the region, Mr. Morrison pointed to Britain’s involvement as evidence of broader goals. “It’s also the U.K.’s view that this provides the opportunity for others to be involved in a multinational engagement,” he said.

Australia, a longtime ally of the United States, has fought in both Iraq and Afghanistan as part of American-led coalitions, and it still has troops in both countries.

But the new commitment in the Persian Gulf comes as Australia seeks to reorient its military and diplomatic posture toward its own region again, in an attempt to temper China’s growing influence.

The tensions between Iran and the West escalated in early July when British marines and Gibraltar port officials seized an Iranian ship, saying that it was carrying oil to Syria in violation of a European Union embargo.

Iran’s detention of the British-flagged tanker last month in the Strait of Hormuz was in retaliation for that. The day before, the American military had downed an Iranian drone in the strait, in what Mr. Trump called an act of self-defense.

Last week, the authorities in Gibraltar released the Iranian ship and freed its crew, hours after the United States applied to seize it.