Firefighters work to contain a bushfire in northern New South Wales last week. With fires burning more fiercely than before, the country’s preparing for... 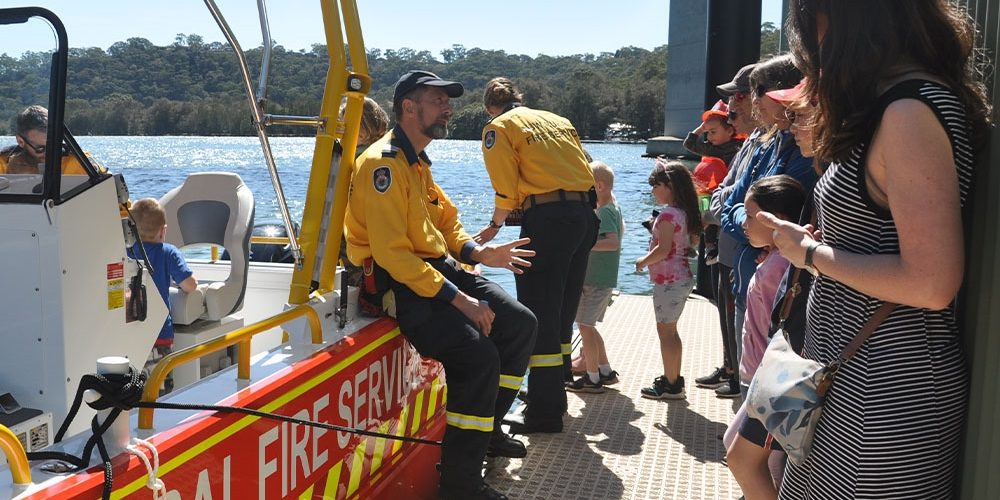 Woronora, Australia – On a Sunday morning in the southern suburbs of Sydney the sun is shining. There’s barely a smudge of cloud in the sky and it’s warm. Some seven degrees warmer than usual for this time of year.

A few hundred kilometres further north on Australia‘s east coast, bushfires are raging out of control on the New South Wales-Queensland border region, but at the Woronora Rural Fire Service station, on the banks of the tranquil Woronora River, the mood is calm, and the barbeque is heating up.

The fire station, manned by volunteers, is hosting one of more than 600 “Get Ready Weekend” events being held around New South Wales, intended to prepare communities for the coming bushfire season except that, for many communities, the season has already begun, and the fires are as fierce as those normally seen in the middle of summer.

Captain Mitch Giles, the leader of the local rural fire brigade, is hanging out on the jetty next to one of the flashy new firefighting boats the brigade has just acquired. A business manager by day, Giles has been volunteering as a firefighter for more than a decade, and conditions for the coming season are worrying. 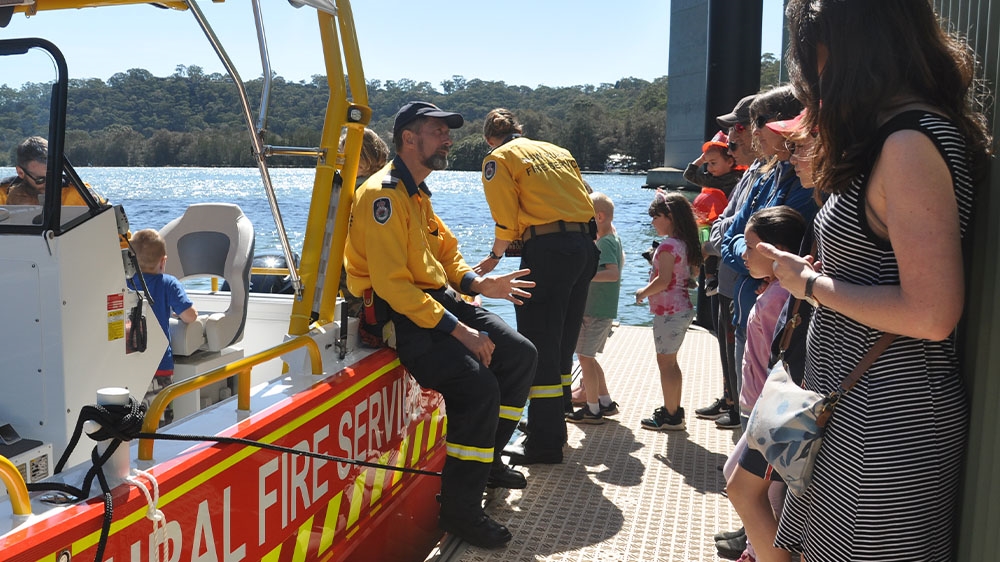 Capt. Mitch Giles, a volunteer firefighter for more than a decade, briefs local residents on what to do in a bush fire, at an open day at his fire station in southern Sydney [Celina Ribeiro/Al Jazeera]

After a long drought and warm winter for much of the country, meteorologists are predicting a hotter, drier, longer summer and authorities warn the risk of bushfires is higher than normal, too, for nearly the whole of Australia’s east coast and large swaths elsewhere.

Some of the Woronora volunteer fire brigade have just come back from helping with firefighting efforts up north. The fire there was so erratic, said Giles, that the firefighters were struggling to breathe, not as a result of the smoke, but a because the fire was so large it was sucking the oxygen from the air.

“That’s the weird stuff that’s going on,” he said. “And we’re going to see more of it.”

While small fires are common in the bushlands of southern Sydney, it has been 25 years since there was a catastrophic fire. For many people, their memory is distant or non-existent. The firefighters, however, know all too well what catastrophic fires look like, and conditions are ripe for them to return.

“Everyone has an understanding that once the drought index gets above a certain value, fire behaviour becomes erratic,” the firefighter said. “We’re in that zone now.”

The dire warnings seem a long way off for the families, couples and dog-walkers who trickle into the Woronora fire station to play with the hoses and climb around the brigade’s trucks.

The turnout is larger than usual. Significant investment in engaging the public, backed by substantial and coordinated research, has meant that the message about the need to get ready for fires is getting through.

“If I go back in time 10 years ago, people would bring their kids down to look at the fire trucks,” he said. “Parents weren’t asking questions. They weren’t thinking about how they get prepared. Last year, we noticed a shift. People are becoming more proactive.” 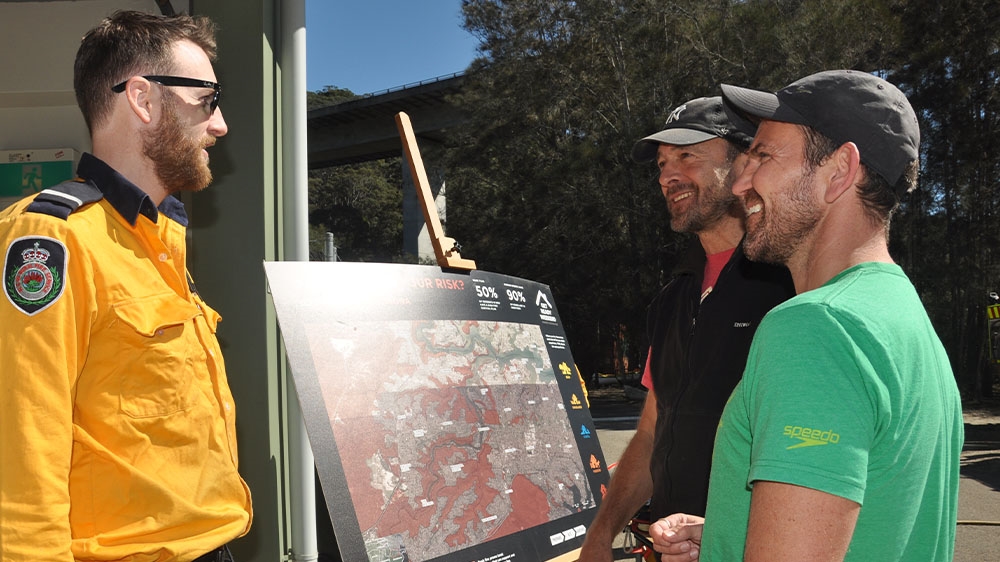 Quentin, left, and Sam discuss fire with a local firefighter at the fire station open day in Woronora in the suburbs of Sydney. They have a pump for their property to get water from the river, but have to learn how to use it [Celina Ribeiro/Al Jazeera]

Quentin and Sam have brought their 10-year-old, one-eyed beagle down to the fire station. They have just re-built their house, set deep in the nearby suburban bush. As part of the new stricter building codes, they had to install a pump on their property to help them get water from the river if there’s a fire, but they have no idea how to use it. A volunteer firefighter takes the couple step-by-step through using the pump and refining their bushfire plan.

“For us, it’s not just about being compliant,” Quentin said. “We love where we live. We want to protect our home. And we know it’s inevitable that someday something may happen. If you look at what’s happening in (Queensland) and northern New South Wales, it just feels more real.”

It has been 10 years since the 2009 Black Saturday fires in the southern state of Victoria; a catastrophic bushfire which left 173 people dead. With so many deaths, the disaster prompted Australia to review not only how it prepares communities for fires, but how its firefighters battle them.

Richard Thornton is the chief executive of the Bushfire and Natural Hazards Cooperative Research Centre, which has been critical in developing warnings and minimising deaths and destruction caused by fire.

“A lot of research we have done into where and why people have died in events has allowed us to tailor our messaging to cohorts of people who are at risk,” he said. “We know in bushfires that older people and younger people were over-represented among those who died. So we can start saying ‘Understand your limitations. You’re the people who should be moving early and not staying to defend’.”

Before the Black Saturday fires, at-risk communities were basically told to “Stay or Go”.

Now, on catastrophic days the message is to leave early.

Researchers have refined fire safety messages, and Australians are encouraged to download apps like Fires Near Me, which track fires and issue alerts. In the event of an emergency, fire services can send out an emergency alert to all mobile and fixed-line phones within any defined geographic area.

“We have had fires that have occurred in like conditions to Black Saturday and we haven’t had the scale of fatalities of that tragedy since,” Thornton said.

But that does not mean it cannot happen again.

“To believe it’s not inevitable that we will have another Black Saturday is a false hope.” 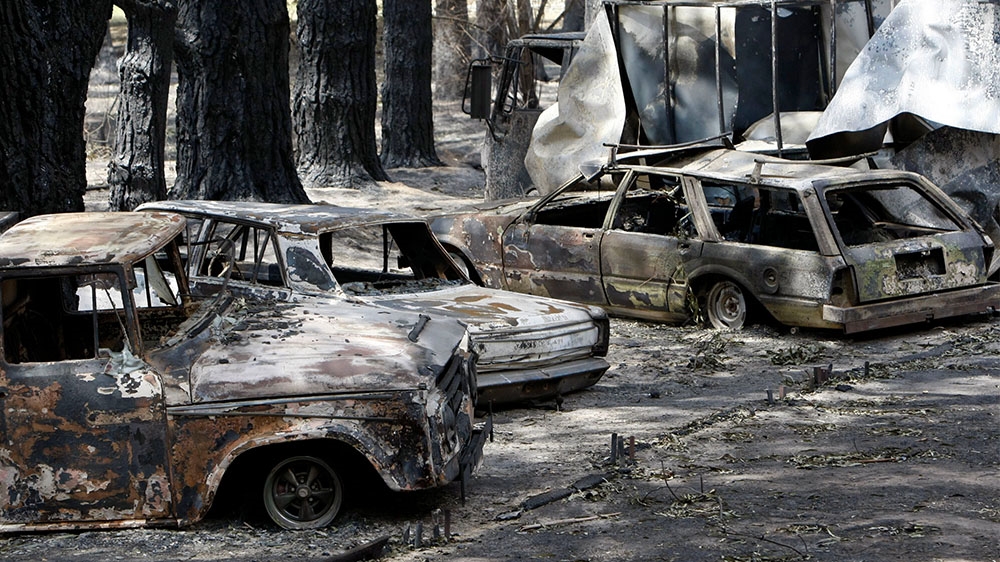 It’s not just changes to messaging. Building codes have become stricter, too. Investment in the science is strong.

And where Australia also differs from other countries afflicted by catastrophic forest fires is the low number of firefighter fatalities, notes Thornton.

Bushfires in Australia are mostly fought by a volunteer force, and training has intensified over the years. The fire trucks themselves have been re-engineered to include internal sprinkler systems, roll down heat shields, and other modifications to provide as safe a shelter as possible if firefighters become trapped.

For all this, all those attending the Get Ready Weekend know the fires will come again. Climate change means catastrophic fires will become more likely and increasingly frequent.

“Australia is sitting roughly one degree above the long term average temperature at the moment,” Thornton said.

“What that does is exacerbate the extreme ends … Our increased temperature is giving us conditions where forests have become drier, because there’s also decreased rainfall, and the time between those really bad days will decrease.

“We’re now in a warmer environment than 10 years ago, so we will see those conditions again,” he said before adding, with no sense of panic, “It might actually be worse next time.”