AFP/Tegucigalpa At least three people died and seven were injured in riots Saturday night between rival football fans ahead of a national championship game... 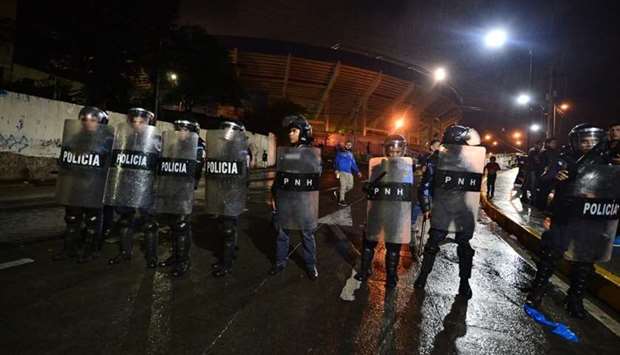 At least three people died and seven were injured in riots Saturday night between rival football fans ahead of a national championship game in Honduras, a hospital treating the victims said.

Supporters of Olimpia and Motagua teams — bitter local rivals — rioted outside National Stadium in the capital Tegucigalpa.
Julieth Chavarría, a spokesman for Hospital Escuela, told AFP that “seven people were admitted, three of them died and four are still being treated in the emergency room.”
The riot is believed to have started when a bus carrying Motagua players was attacked, leaving three players injured, club president Pedro Atala said on social media.
Emilio Izaguirre, Jonathan Rougier, and Roberto Moreira were briefly treated in hospital.
“Bottles, stones were thrown at us and the players threw themselves on the floor screaming,” Motagua coach Diego Vásquez told local media.
Olympia president Rafael Villeda said the violence was “unfortunate”.
Following the incident, the game was suspended by the National Football League.
Roughly 10,000 fans who had made it inside the stadium were injured in a stampede to leave, and then caught up in police tear gas outside.
Fans had had high expectations for the match — the first confrontation between Vásquez and the new coach of Olimpia Pedro Troglio — but police called the event high-risk and deployed some 5,000 officers in and outside the stadium.
The Ultra Faithful wing of Olympia supporters, known for their violent tactics, was also banned from entering the stadium.