SANA, Yemen — Airstrikes by the Saudi-led coalition fighting Houthi rebels in Yemen hit a university used as a detention center in a southwestern... 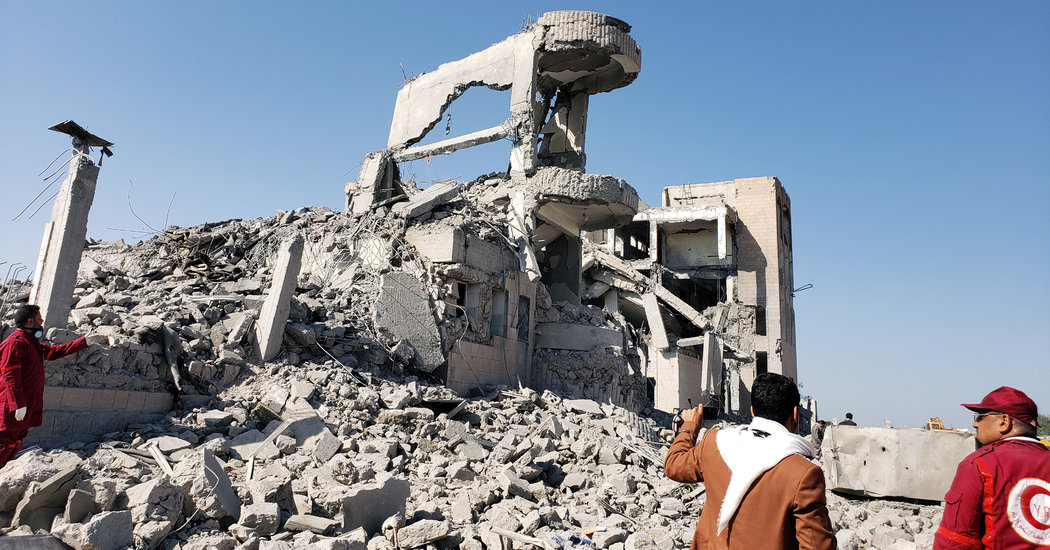 SANA, Yemen — Airstrikes by the Saudi-led coalition fighting Houthi rebels in Yemen hit a university used as a detention center in a southwestern province on Sunday, killing at least 70 people, officials and the rebels’ health ministry said.

The officials said the airstrikes targeted the university in Dhamar that is one of dozens of detention centers run by the Houthis in areas under their control. Dhamar is around 60 miles south of the capital, Sana.

The Saudi-led coalition said it had hit a Houthi military facility used to store drones and missiles in Dhamar, “in accordance with international humanitarian law.”

It said “all precautionary measures were taken to protect civilians.”

The strike occurred as the Swedish foreign minister, Margot Wallstrom, was leading talks in Jordan on Sunday as part of her attempt to restart peace negotiations and break the war’s long stalemate.

Ms. Wallstrom told Swedish Radio last week that she wanted to “speak with as many people as possible,” and planned to visit Saudi Arabia, the United Arab Emirates, Oman and Jordan, and meet officials from the United Nations.

She acknowledged that a deal signed in December was “fragile.”

“I believe we have a great deal of trust with the parties, and we believe that it is our responsibility to try to ensure that this agreement is implemented,” Ms. Wallstrom said.

The Houthi Health Ministry said in a statement that at least 70 bodies had been pulled so far from the detention center after the airstrikes. An additional 60 people were said to be wounded.

Abdul-Qader el-Murtaza, a rebel official, said 170 captured government fighters had been in the detention center.

“The targeted prison housed over 170 prisoners of war, most of whom were supposed to be part of a local exchange deal,” he was quoted as saying by the Houthi-run outlet Al Masirah TV.

Residents said, however, that people arrested over being critical of the Houthis had been imprisoned in the detention center. They said at least seven airstrikes had hit the area.

Mohammed Abdul-Salam, a spokesman for the Houthis, posted on his Telegram account graphic photographs showing bodies under the rubble.

The International Committee for the Red Cross said on Sunday that it had sent “urgent medical supplies” to Dhamar, and Franz Rauchenstein, head of the delegation in Yemen, said he was heading to the area “to assess the situation.”

The civil war in Yemen has claimed tens of thousands of lives, pushed millions to the brink of famine and spawned the world’s worst humanitarian crisis.

The war erupted in September 2014, when the Houthis swept into the capital. The Saudi-led coalition intervened half a year later to back the internationally recognized government of President Abdu Rabbu Mansour Hadi.

The coalition faces widespread international criticism for airstrikes that have killed civilians, and the attack on Sunday was bound to bring condemnation from human rights groups.