A team of Public Works Authority (Ashghal) officials visited the Central Municipal Council (CMC), and made presentations on infrastructure projects being implemented in different... 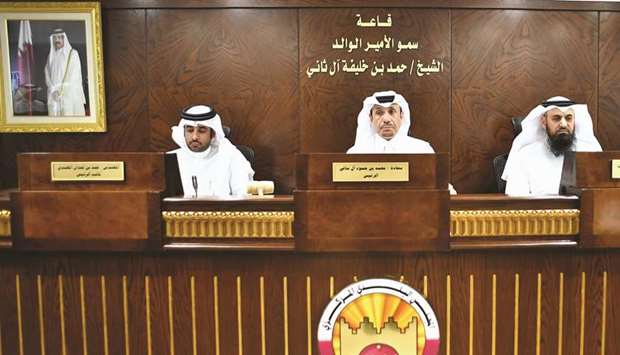 A team of Public Works Authority (Ashghal) officials visited the Central Municipal Council (CMC), and made presentations on infrastructure projects being implemented in different areas. They also discussed related issues with the CMC members.

The session was headed by CMC chairman Mohamed bin Hammoud al-Shafi, who extended his best wishes and congratulations to His Highness the Amir Sheikh Tamim bin Hamad al-Thani on the occasion of the holy month of Ramadan.

The Ashghal delegation to CMC included Saoud Ali al-Tamimi, manager at the Roads Projects Department, and a number of department and section heads at the authority. They elaborated on the various projects of Ashghal that are meant to improve services in different areas around the country.
Al-Tamimi said among the priorities of Ashghal are projects pertaining to areas with higher levels of groundwater, places without working drainage networks and newly introduced residential areas.

He stressed that achieving the full linkage of all areas around the country to the drainage network was one of the main priorities for the authority. In 2019, there are 28 infrastructure projects that serve 21 plots of land in addition to ongoing projects from last year, it was observed.

Al-Shafi welcomed the delegation’s visit and stressed the importance of the ongoing co-operation and communication with Ashghal to serve people living in various constituencies. He also expressed CMC’s thanks and appreciation for the efforts exerted by Ashghal to implement major, high-quality projects that have greatly improved connectivity and the quality of life in the country, reducing congestion on the main roads and achieving smoother traffic circulation.

Some CMC members discussed various related topics of concerns with the visiting officials and they responded to their enquiries.
Meanwhile, the council discussed the responses of  HE the Minster of Environment and Municipality to its previous recommendations on reducing the number of roundabouts along express roads and abolishing the unreal markers of boundaries between different villages and determining official boundaries.

The CMC saw that the responses were adequate on both issues and decided to follow up on related updates.