“Last year was an incredible year and I would like to build on this in 2019 and 2020. I am excited to start my season in Doha for the first time and test out the track at the Khalifa International Stadium ahead of the World Championships. The female sprints have so many extremely talented women at the moment and I expect Doha to be a great race,” said Asher-Smith.

Asher-Smith’s principal rival will be Ivory Coast’s Marie-Josee Ta Lou who was in especially prolific form over 100m in 2018, winning 10 of her 11 races, including the Doha Diamond League in 10.85 – a time matched by Asher-Smith later in the season.

Ta Lou is one of the most complete sprinters on the circuit having won silver medals in both the 100m and 200m at the IAAF World Championships in London in 2017. She also raced extensively over 60m during the indoor season, setting a world-leading time of 7.02 in Dusseldorf.

Phyllis Francis went one better than Ta Lou at the World Championships in London where she splashed through the puddles to win the 400m title in one of the most unpredictable races of the championships. She will also begin her international campaign over 200m in Doha where her lifetime best of 22.42 could be put to the test.

Another reigning world champion heading for the Doha Diamond League is Turkey’s RamilGuliyev who is headlining his specialist event.

Guliyev held off world 400m record-holder Wayde van Niekerk to clinch the world title over 200m in London in 20.09 before dominating the European Championships in Berlin last August. He smashed the championship record with 19.76, just missing Italy’s Pietro Mennea’s European record of 19.72 which dates back to 1979.

“I started my 2018 season in the Doha Diamond League last year and I look forward to returning to compete at the Khalifa International Stadium,” said Guliyev, who finished third last year in 20.11. 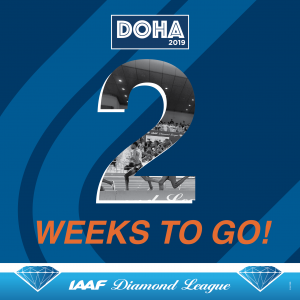 “Breaking the championship record and my lifetime best in Berlin was fantastic but I am sure I can go even faster. Of course my big aim is to defend my world title in Doha and I know I will probably have to break my lifetime best to do that.”

Guliyev will face four other sprinters who broke the 20 second-barrier last year including world bronze medallistJereem Richards from Trinidad & Tobago – who finished second in Doha last year in 19.99 – and IAAF Continental Cup winner Alonso Edward from Panama who clocked 19.90 in 2018.

Ecuador’s Alex Quinonez and Canada’s Aaron Brown, who set lifetime bests of 19.93 and 19.98 respectively in 2018, have also been confirmed along with world fourth-placerNethaneel Mitchell-Blake from Great Britain.

Jamaica’s Janieve Russell and Olympic champion Dalilah Muhammad from the United States will also renew their rivalry in the 400m hurdles in the Doha Diamond League.

They faced each other eight times over the barriers in 2018 and they were particularly closely matched in Shanghai where Muhammad prevailed in 53.77 to Russell’s 53.78 and in Eugene where Russell came out on top in 54.06 to Muhammad’s 54.09.

“I’ve had so many battles with Dalilah over the last couple of seasons and I look forward to facing her again in Doha. There is never an easy race on the Diamond League so racing in this world class field will tell me exactly where I am with my preparations ahead of the World Championships,” said Russell.

The line-up also features Georganne Moline from the United States who also broke the 54 second-barrier last year with 53.99 and Ukraine’s Hanna Ryzhkova and Great Britain’s Meghan Beesley, the silver and bronze medallists from the European Championships in Berlin.

Tickets for the Doha Diamond League are available at:
https://www.q-tickets.com/qoc/eventdetails.aspx?k1=nkN8dD2wwvc=