Ariana Grande Gets a Lemon Thrown at Her During Coachella Performance

In a video captured by a fan, the 25-year-old pop diva got hit in the chest with the fruit while heading on the main...

In a video captured by a fan, the 25-year-old pop diva got hit in the chest with the fruit while heading on the main stage to perform her song NASA in a wine-colored Michael Ngo outfit.

Stunned, the Thank U, Next songstress ran offstage and exclaimed: ‘What the f***?That’s because one of y’all threw a lemon at me! S***.’ 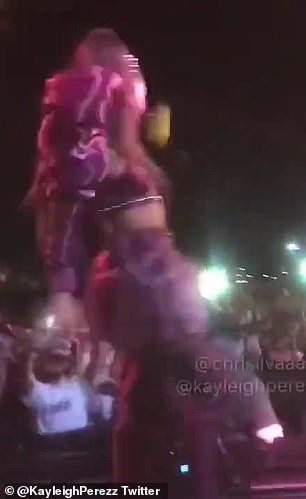 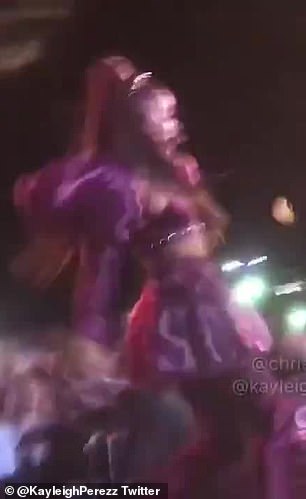 Moment of impact: In a video captured by a fan, the 25-year-old pop diva got hit in the chest with a lemon wedge while heading on the main stage to perform her song NASA

Fans immediately suspected the culprit was a fan of Beyoncé due to her 2016 visual album Lemonade and a recent false report that Ariana was paid twice what Queen Bey was paid for her 2018 headlining set.

‘We’re told the contracts for Grande and Beyoncé were structured exactly the same way,’ a source has since clarified to The Blast

The former Nickelodeon child star recovered from the lemon assault and closed her concert with surprise guest Justin Bieber (they share manager Scooter Braun) to sing his 2016 hit Sorry.

‘I haven’t been on stage in like two years,’ the 25-year-old Canadian crooner said.

‘I came out here I had no idea I was going to be on stage tonight. So anyways this is my first time on stage in two years. I had to get my groove back, my swag back. By the way – album coming soon.’

On Monday, the Florida-born belter found a kindred spirit in yet another Canadian artist – two-time Golden Globe winner Jim Carrey – who responded to her Insta-storying his quote on depression last weekend.

‘@ArianaGrande I read your lovely mention of me and things I’ve said about depression,’ the 57-year-old funnyman and sometime painter tweeted

‘A brilliant teacher and friend, Jeff Foster was OG on the “Deep Rest” concept. I admire your openness. I wish you freedom and peace. I feel blessed to have such a gifted admirer. Happy Easter!’

‘I can’t process this or breathe hold on!’ Grande (born Butera) responded

‘Thank u so much for your kindness. I don’t think u understand how much I adore u or what u mean to me. Thank u for taking the time to share this w me. You are such an inspiration. I can’t wait to tattoo this tweet to my forehead. Sending you lots of love & all things happy!’ 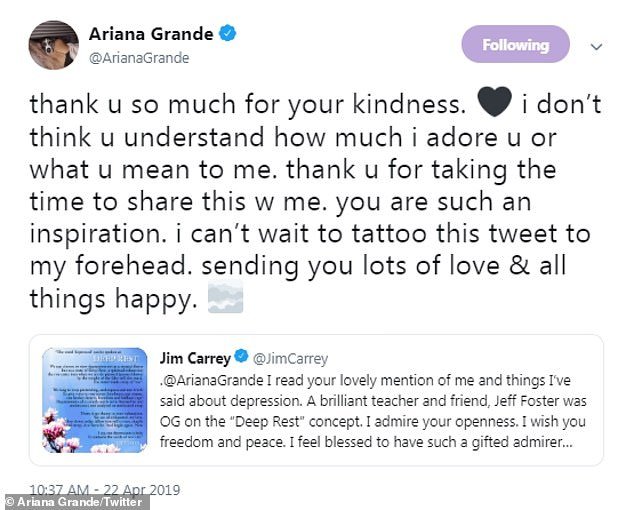 Both celebrities have suffered the devastating loss of romantic partners from drug overdoses.

The Bad Idea belter – who ended her four-month engagement to SNL star Pete Davidson in October – will next bring her 81-date Sweetener World Tour to Canada’s Rogers Place in Edmonton.