The global “Sesame Street” family is getting three new Muppet members: Basma, Jad and Ma’zooza. The characters are creative and adventurous, speak Arabic and... 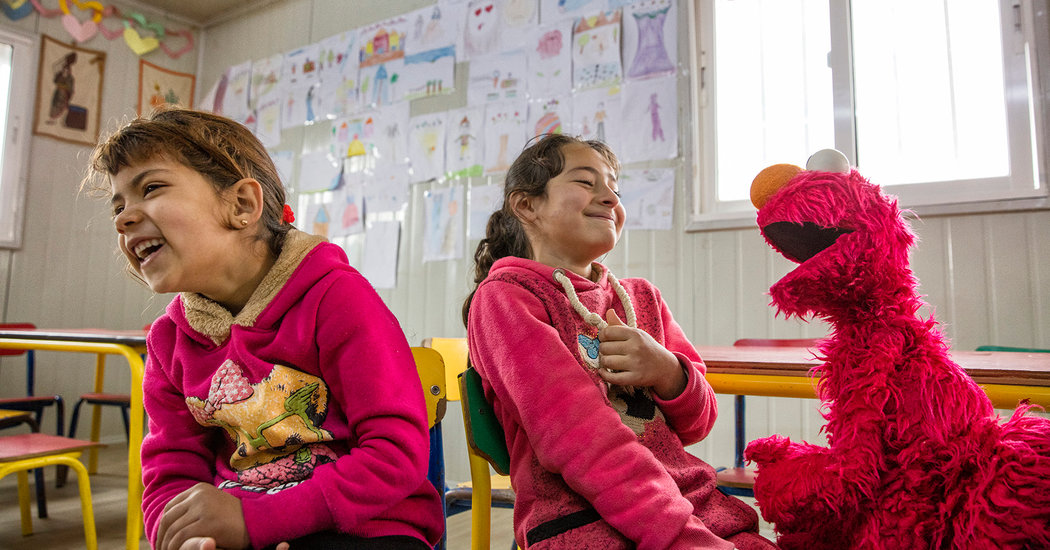 The characters are creative and adventurous, speak Arabic and are set to tackle yet another difficult subject: the trauma facing refugee children in the Middle East. They will lead a new Arabic-language, locally produced show, created by Sesame Workshop in conjunction with the International Rescue Committee, which aims to bring laughter and learning to children affected by displacement in Syria, Iraq, Jordan and Lebanon.

Called “Ahlan Simsim,” which means “Welcome Sesame” in Arabic, the show will debut in early February 2020, according to a Medium post on Sunday by the show’s executive producer, Scott Cameron. By tackling emotions like fear, loneliness and hopelessness, the show hopes to give children tools to succeed and understand the world.

The purple-furred Basma is almost 6 years old and loves to sing and dance, Mr. Cameron wrote. Basma welcomes Jad, a yellow-furred boy of the same age, to the neighborhood with open arms. Jad likes to plan and organize and enjoys painting with a brush he brought from where he used to live. The two are followed around by Ma’zooza, a baby goat who eats anything shaped like a circle.

The show is fueled by a $100 million grant provided by the MacArthur Foundation in 2017. Julia Stasch, the foundation’s president at the time, said then they wanted to reach young children displaced by conflict and persecution in the Middle East by funding “the largest early childhood intervention program ever created in a humanitarian setting.”

Over 5.6 million people have fled Syria since 2011, according to March 2019 figures from the United Nations refugee agency, with many seeking refuge in neighboring countries including Jordan, Lebanon and Turkey. Approximately 50 percent of all registered Syrian refugees are under the age of 18, with the crisis robbing basic rights like education from millions, and leaving them suffering from “toxic stress,” a severe form of psychological trauma, according to a 2017 report by the international nonprofit organization Save the Children.

Since its inception in 1969, “Sesame Street” has blended music, puppetry and animation to educate children worldwide and make them come to terms with hard truths. The public television show has tackled numerous issues affecting society: from homelessness and hunger to grief, racism, gender equality and addiction.

The program, which first arrived in the Middle East in 1979, has begun showing in countries including Afghanistan and South Africa. Last year, Sesame Workshop partnered with the Lego Foundation to create play-based learning programs for Rohyinga refugees in Bangladesh.

To create “Ahlan Simsim,” the International Rescue Committee and Sesame Workshop last year held brainstorming sessions in Lebanon and Jordan with early childhood specialists, psychologists, linguists, writers and artists, according to Mr. Cameron’s post. In its first season, the show will tackle how to manage emotions and using strategies like belly breathing and art to cope with difficulties.

The show’s message is vital, Mr. Cameron wrote, because “we know how important it is for children to see their own lives and experiences reflected on-screen.”

David Miliband, the head of the International Rescue Committee, said in an email on Thursday that programs like “Ahlan Simsim” were crucial as refugee children continue to spend more time away from home. The United Nations refugee agency in 2015 estimated protracted refugee situations by the end of 2014 to be 25 years.

“Across the Middle East, there are Syrian refugee children whose entire childhoods have been a life of displacement,” Mr. Miliband said. “‘Ahlan Simsim’ is a massive and transformational investment that recognizes the scale of the problem and what’s at stake.”