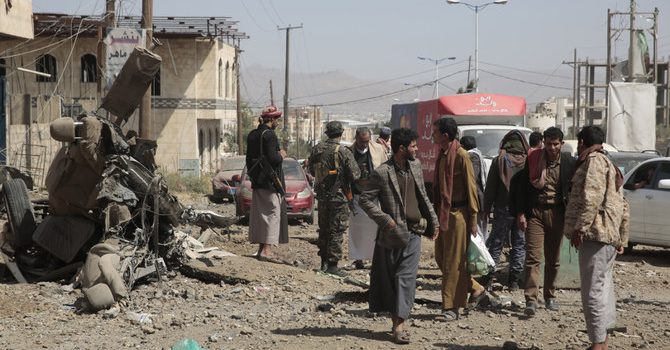 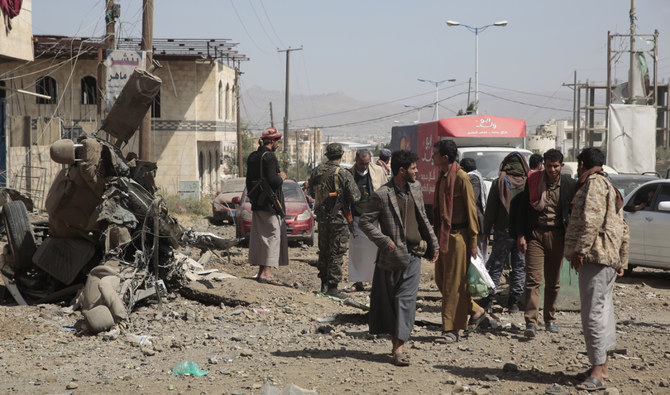 AL-MUKALLA: Arab coalition warplanes on Wednesday night struck Houthi-controlled military sites in the Yemeni capital and Saada province, as government forces on the ground fought to push back the militia from Marib province.

Coalition spokesman Brig. Gen. Turki Al-Maliki said military sites were targeted in Sanaa and Saada, where ballistic missiles, weapons and explosive-rigged drones are stored and assembled. He vowed to launch more airstrikes if the Houthis did not halt their cross-border attacks.

“The militia’s cross-border attacks are absurd, and we continue to exercise restraint,” Al-Maliki said.

Sanaa residents said that large explosions rocked the city as the warplanes hit Al- Sawad military base and other locations.

The Houthis have recently escalated missile and drones attacks on government-controlled areas in Yemen and on Saudi Arabia.

On Wednesday, three missiles struck the western Yemeni city of Mocha as local officials were preparing to meet the UN’s Yemen envoy.

Saudi air defenses have shot down explosive-rigged drones and ballistic missiles fired by the Houthis toward the Kingdom.
The coalition’s aerial bombardment of Houthi targets came as troops on Wednesday and Thursday fought in flashpoints outside the strategic central city of Marib.

Yemen’s Defense Ministry said that army troops and allied tribesmen had attacked Houthi military gatherings and reinforcements in contested areas south and west of Marib city such as Al-Kasara.

Dozens of Houthis were reportedly killed or wounded during government counterattacks as coalition warplanes struck the Houthis’ military equipment and locations in Marib province.

In Marib, the government’s Executive Unit for IDP Camps said the number of displaced people from Marib’s southern districts had increased to 90,000 since September, when the Houthis started attacking Abedia, Juba, Rahabah and Hareb.

Last week, the same government body said more than 70,000 people were forced to leave their homes and displacement camps in those districts and take shelter in the city of Marib and Al-Wadi district.

UN Yemen envoy Hans Grundberg said Thursday he had witnessed the impact of the fighting and the Houthi blockade on civilians in the besieged city of Taiz.

He called on the country’s warring factions to de-escalate and comply with peace efforts.

“These visits have given me a first-hand experience of the impact of the conflict on civilians in Taiz, including the difficulties they face moving through their daily lives,” Grundberg said, after concluding a visit to government-controlled areas in Taiz province. “It has also given me the opportunity to hear directly from Yemeni men, women and young people on how a UN-led political process can help to address the situation in Taiz as part of a sustainable solution to the conflict in Yemen.”