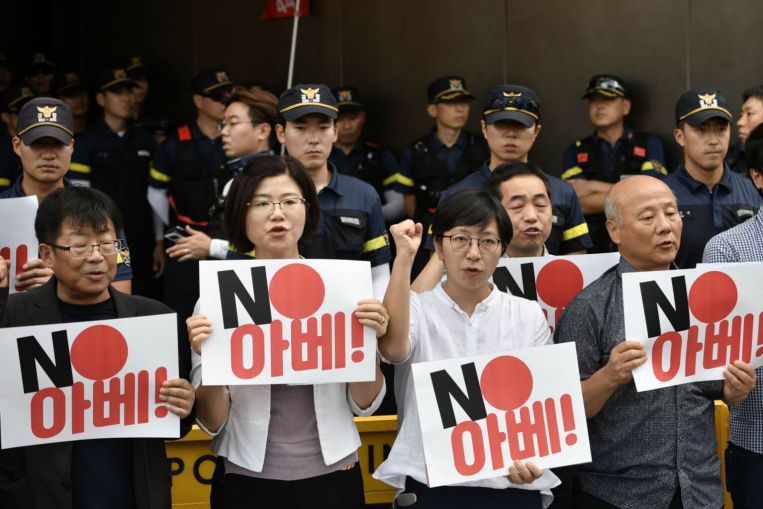 Protesters stood in front of the Japanese embassy building in central Seoul with signs reading “No Abe”, referring to Japanese Premier Shinzo Abe.

South Korea is the first country ever to be dropped from Tokyo’s list of nations granted minimal constraints on exports of products, which analysts say could affect hundreds of key items imported to the South.

Friday’s decision follows Tokyo’s announcement in early July that it would place tough restrictions on exports of chemicals vital to Seoul’s world-leading chip and smartphone industry.

“This is an economic invasion that attacks the vital point of our economy,” said Mr Park Seok-woon, president of the Korea Alliance for Progressive Movement.

Fighting it amounted to “South Korea’s second independence movement” against Japan, he said.

The relationship between the two nations has been strained for decades as a result of Tokyo’s brutal 1910-45 colonial rule over the Korean peninsula.

A series of rulings since last year by South Korean courts ordering Japanese firms that used wartime forced labour to compensate victims – an issue Tokyo says was settled by a 1965 treaty – have further soured ties.

Many Koreans remain bitterly resentful over the past, even going back centuries.

“I feel that Japan has always been the same since the Japanese invasions of Korea in 1592,” Ms Cho Hyun-joo, president of the Seoul Young Korean Academy NGO.

“They’ve always, always considered the Korean peninsula as a commodity and a tool for their own advancement and benefits.”

The protesters called on the South Korean government to abolish its military intelligence-sharing agreement with Japan.

Known as GSOMIA, the pact enables Seoul and Tokyo – both are US allies – to share intelligence on North Korea, among others.

“If Japan cannot trust us with issues related to the economy, then it makes no sense for the two countries to trust each other on military intelligence,” said Mr Park, who was among around 30 demonstrators at the embassy.

Also on Friday, authorities in Gangnam – the wealthy Seoul district made famous worldwide by Korean rapper Psy – said they will remove all Japanese flags from their streets, some of which are decorated with the emblems of all nations.