Erdogan meets with Putin in Sochi to discuss future of northeastern Syria, Kurdish militia With a Tuesday-evening deadline looming, Turkey’s shaky truce with the... 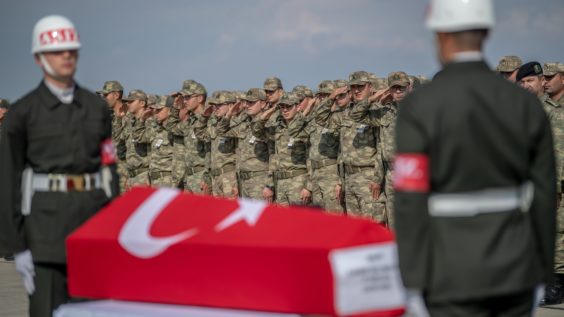 With a Tuesday-evening deadline looming, Turkey’s shaky truce with the Syrian Kurdish militia YPG will likely hold, analysts have told The Media Line.

An agreement reached between Washington and Ankara last week called for Turkey to cease military operations for 120 hours to allow the YPG to pull out of a 20-mile-deep corridor in northeastern Syria.

The deadline comes as Turkish President Recep Tayyip Erdogan traveled to the Russian resort town of Sochi to meet with President Vladimir Putin, an ally of Syrian dictator Bashar al-Assad. The two are said to be discussing the future of northeastern Syria, where Turkey is seeking to establish a “safe zone” without an armed Kurdish presence, among other topics.

Ankara said it launched the incursion over concerns that the YPG – which it says is strongly connected to the Kurdistan Workers’ Party (PKK), an outlawed Kurdish militia inside Turkey – threatens the safety of the country.

Max Hoffman, associate director for national security and international policy at the Washington-based Center for American Progress think tank, told The Media Line he did not expect major fighting to resume because Turkey would now be facing the Russian and Syrian armies, which are said to have tacit understandings with the YPG.

“The Turks have run up against [a] political tripwire,” Hoffman said. “The Turks don’t want to risk any direct confrontation with Russia or the regime…. If they push too far, there’s a chance the Russians or the regime will hit back.”

Nevertheless, Hoffman said, an “escalation could still happen, since Turkey’s [Syrian militia] proxies could independently hit the YPG. Many of these Turkish proxies are very ill disciplined, and they’ve shown themselves to be violent. They want revenge on the YPG, and equally the YPG hates these guys.”

Nicholas Danforth, a senior visiting fellow at the German Marshall Fund, another US think tank, agrees that Turkey is unlikely to expand the Syrian territory under its control, especially “considering Russia’s presence.”

Turkey has already had to face pressure from both Russian and Syrian forces that have been launching attacks on the province of Idlib, where millions of civilians live and Turkish personnel man observation posts.

“If Assad pushes to regain control of Idlib, it could lead to a major new wave of refugees heading to Turkey’s border and put greater domestic pressure on Erdogan, who has politically struggled with Turkish citizens’ resentment over the 3.6 million Syrian refugees already in the country,” Danforth said.

“I do think that Turkey will increasingly come under greater Russian and regime pressure to withdraw from Idlib, and eventually to withdraw from the territory it’s taken from northeast Syria as well,” he added.

Ryan Bohl, a Middle East and North Africa analyst at Stratfor, a global consultancy group, told The Media Line that violations of the agreement were likely to happen, something that could motivate Ankara to ramp up the fighting.

“All it takes is a single attack for Turkey to decide that the cease-fire has been violated and that they will resume widespread operations,” he stated.

The Turkish government has continually promised that it would resume fighting if the YPG did not pull out of the “safe zone,” as Washington and Ankara agreed it should do as part of the truce. On Saturday, Erdogan told a military rally that if the agreement doesn’t hold, “we will continue from where we left off and keep crushing the heads of the terrorists.”

Bohl said the military operation was helping drum up nationalist support from Erdogan’s conservative base.

“He’s getting a lot of political capital from this operation, but it also reveals a weakness in his government,” he said. “He doesn’t have many ways to gain political capital now except to play the nationalist card – Turks increasingly don’t trust him on the economy.”

Bohl said it was “likely that [the US] Congress will enact sanctions against Turkey. While President [Donald] Trump could limit their scope, the rupture will be lasting and will contribute to a lot of the doubts about Turkey’s relationship with the US.”