BENGHAZI, Libya — An airstrike hit a detention center for migrants early Wednesday in the Libyan capital, killing at least 40 people, a health... 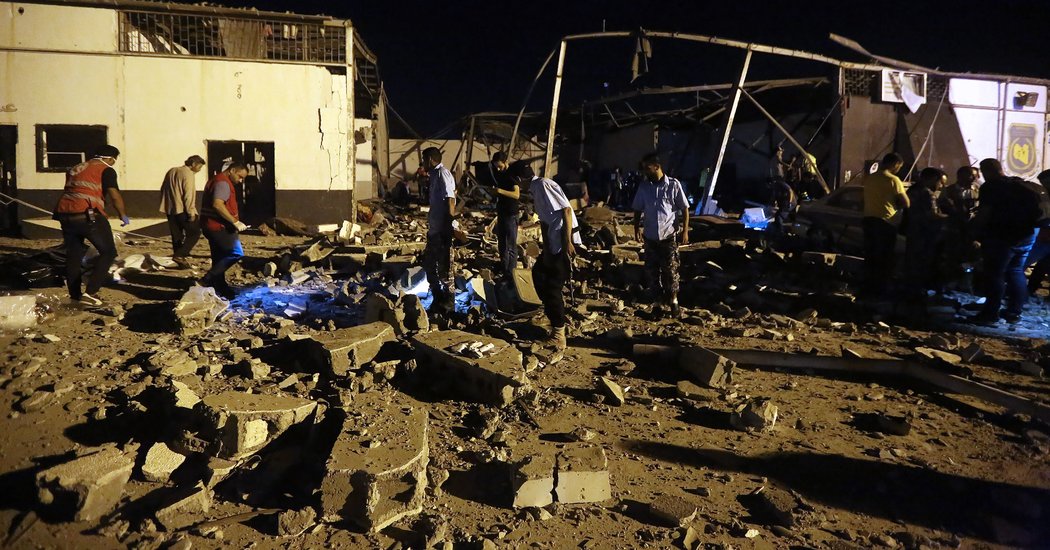 BENGHAZI, Libya — An airstrike hit a detention center for migrants early Wednesday in the Libyan capital, killing at least 40 people, a health official in the country’s United Nations-supported government said.

Eighty other migrants were wounded in the strike on the detention center in the Tajoura neighborhood of Tripoli, said Malek Merset, a spokesman for the health ministry. Mr. Merset posted photos of migrants being taken in ambulances to hospitals.

In a statement, the United Nations-supported government blamed the self-styled Libyan National Army, led by Gen. Khalifa Hifter, a would-be strongman, for the airstrike.

A spokesman for General Hifter’s forces did not immediately answer phone calls and messages seeking comment. Local news media reported that his forces had launched airstrikes against a militia camp near the detention center.

At least 6,000 migrants from Eritrea, Ethiopia, Somalia, Sudan and other nations are locked in dozens of detention facilities in Libya, run by militias that have been accused of torture and other abuses. Most of the migrants were apprehended by Libyan coast guards, trained and funded by the European Union, while trying to cross the Mediterranean Sea into Europe.

The detention centers have limited food and other supplies for the migrants, who made often-arduous journeys at the mercy of abusive traffickers. The United Nations refugee agency has said that more than 3,000 migrants are in danger because they are held in detention centers close to the front lines between General Hifter’s forces and the militias allied with the Tripoli government.

The general’s forces began an offensive against the weak Tripoli-based government in April. They control much of the country’s east and south, but they were dealt a significant blow last week when militias allied with the Tripoli government reclaimed the strategic town of Gheryan.

The fighting for Tripoli has threatened to plunge Libya into another bout of violence on the scale of the 2011 conflict that ousted the longtime dictator Col. Muammar el-Qaddafi and led to his death.