Ambassador William Taylor is escorted by US Capitol Police as he arrives to testify before House committees as part of the Democrats” impeachment investigation... 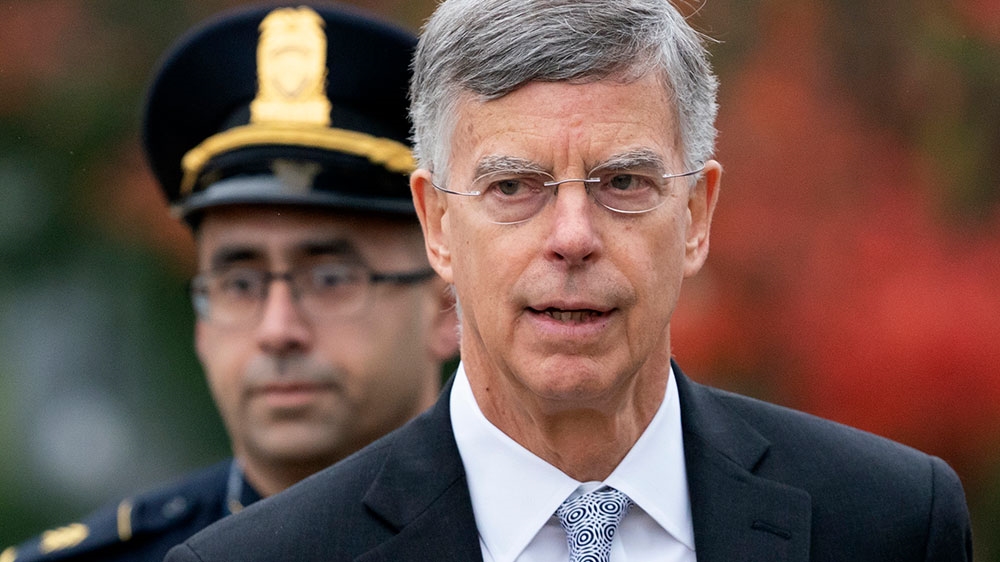 The top American diplomat in Ukraine testified on Tuesday that US President Donald Trump made the release of US security aid to Ukraine contingent on Kyiv publicly declaring it would carry out politically motivated investigations that he demanded, according to a copy of his statement to politicians.

William Taylor, a career diplomat and former Army officer who serves as the charge d’affaires in the US embassy in Ukraine, gave closed-door testimony to the three Democratic-led House of Representatives committees leading an impeachment inquiry against the Republican president. The Washington Post posted a copy of Taylor’s opening statement online.

Taylor’s appearance marked another pivotal development in the political drama unfolding in Washington that threatens Trump’s presidency even as he pursues re-election.

It ran counter to Trump’s contention that there was no quid pro quo – a Latin phrase meaning a favour for a favour – related to the $391m in security assistance approved by the US Congress to help combat Russia-backed separatists in eastern Ukraine that Trump had withheld.

“It was the most damning testimony,” Democratic Representative Debbie Wasserman Schultz told reporters.

Taylor testified that he was told by Gordon Sondland, the US envoy to the European Union, that Trump had linked release of the aid to public declarations by Ukrainian President Volodymyr Zelensky about investigating domestic political rival Joe Biden and his son Hunter Biden as well as a debunked conspiracy theory about the 2016 election.

Zelensky agreed to the request. The aid was later released.

In his testimony, Taylor detailed numerous conversations and events and emphasised the strategic importance of Ukraine as it faces Russian aggression.

Previously released text messages that Taylor sent to other senior US officials denounced as “crazy” the idea of withholding the security aid to benefit a domestic political campaign. In his testimony, Taylor emphatically reiterated that view.

The House inquiry is focusing on Trump’s request during a July 25 telephone call with Zelensky that he investigate the Bidens. Joe Biden, the former vice president, is a leading contender for the 2020 Democratic presidential nomination to face Republican Trump. Hunter Biden had served on the board of Ukrainian energy company Burisma. There has been no evidence of wrongdoing by the Bidens.

Taylor said Trump also made a White House invitation to Zelensky contingent on announcing to the investigations.

The content of the phone call was first revealed by a whistle-blower within a US intelligence agency, who submitted a report stating Trump pressured Zelensky to advance his personal political interests. Trump also publicly asked China to investigate the Bidens.

Trump has denied any wrongdoing and accused Democrats of trying to remove him to prevent him from being re-elected.

Trump has denied that there was a quid pro quo, though his acting chief of staff last week acknowledged that the aid was contingent on Ukraine investigating a discredited theory by some Trump supporters that there is a Democratic National Committee (DNC) computer server in Ukraine.

Referring to Taylor’s testimony, Wasserman Schultz added, “I really felt like he drew the most direct line that I’ve heard from President Trump to the withholding of foreign aid to a vital diplomatic partner that needs those resources to keep Russia at bay – and tying the withholding of that funding and the meeting that President Zelensky wanted to President Zelensky declaring that he would open investigations into the Burisma Biden issue and the 2016 election.”

“During that phone call, Ambassador Sondland told me that President Trump had told him that he wants President Zelensky to state publicly that Ukraine will investigate Burisma and alleged Ukrainian interference in the 2016 election,” Taylor told politicians, according to the copy of his opening statement.

The “alleged Ukrainian interference” is a reference to a debunked conspiracy theory that it was Ukraine, and not Russia, that interfered in the 2016 US election. US intelligence agencies and a special counsel investigation concluded that Russia used a campaign of hacking and propaganda to undermine Democratic candidate Hillary Clinton and boost Trump’s candidacy in 2016.

Taylor had mentioned his concerns over the withholding of US aid on September 9 to Sondland and Kurt Volker, the State Department’s former special envoy to Ukraine, in a text message provided to House investigators and later made public.

“As I said on the phone, I think it’s crazy to withhold security assistance for help with a political campaign,” Taylor wrote in the text message.

On Tuesday, Taylor told the impeachment inquiry: “Our national security demands that this relationship remain strong. However, in August and September of this year, I became increasingly concerned that our relationship with Ukraine was being fundamentally undermined by an irregular, informal channel of US policy-making and by the withholding of vital security assistance for domestic political reasons.”

Taylor also said Sondland told him that he recognised he had made a mistake by earlier telling the Ukrainian officials that Zelensky’s desire for a White House meeting with Trump was dependent on a public announcement of investigations Trump sought. In fact, Taylor testified, Sondland said “‘everything’ was dependent on such an announcement, including security assistance.'”

Taylor was tapped to serve as charge d’affaires in Kyiv, where he had served as US ambassador from 2006 to 2009, after Trump in May abruptly removed Ambassador Marie Yovanovitch. Giuliani had portrayed her as resisting his efforts to push Ukraine to investigate the Bidens.

Yovanovitch testified in the impeachment inquiry on October 11.

Sondland was a wealthy Oregon hotelier and Trump political donor named to his European diplomatic post last year. In his testimony to politicians, he expressed concern that Trump had ordered US officials in May to work with Giuliani on Ukraine policy. Giuliani had been working to engineer a Ukrainian investigation of the Bidens.

Taylor said Sondland, during a September 8 phone call, “tried to explain to me that President Trump is a businessman. When a businessman is about to sign a cheque to someone who owes him something, he said, the businessman asks that person to pay up before signing the cheque.”