WASHINGTON — American counterterrorism officials are voicing increased alarm about a Qaeda affiliate in Syria that they say is plotting attacks against the West... 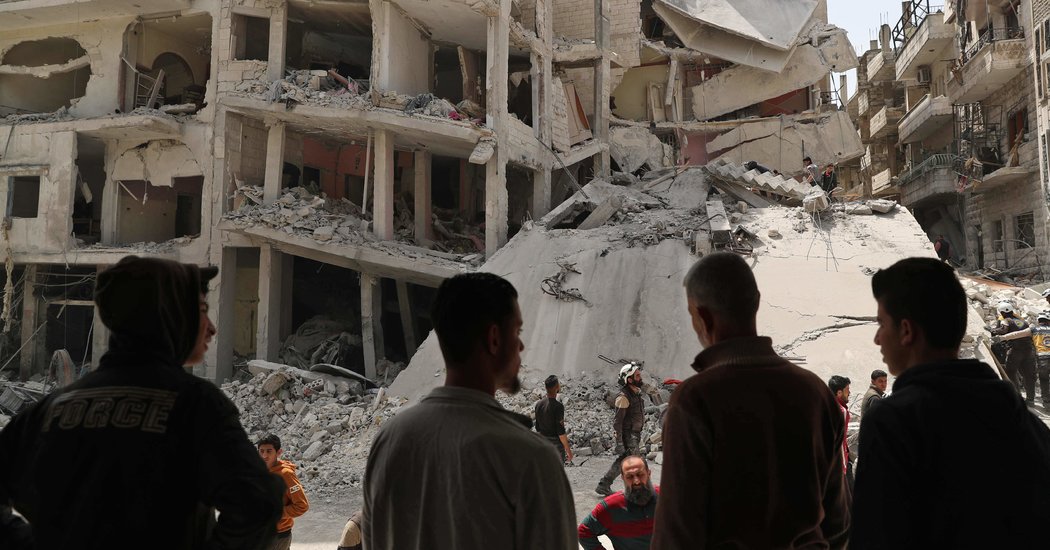 WASHINGTON — American counterterrorism officials are voicing increased alarm about a Qaeda affiliate in Syria that they say is plotting attacks against the West by exploiting the chaotic security situation in the country’s northwest and the protection inadvertently afforded by Russian air defenses shielding Syrian government forces allied with Moscow.

The rise of this latest Qaeda branch in Syria, as well as the operations of other Qaeda affiliates in West Africa, Somalia, Yemen and Afghanistan, underscore the terrorist group’s enduring threat despite the death of Osama bin Laden and being largely eclipsed in recent years by the Islamic State, or ISIS, as the terrorist group of choice of global jihadis.

The new Qaeda branch, called Hurras al-Din, emerged in early 2018 after several factions broke away from a larger affiliate in Syria. It is the successor to the Khorasan Group, a small but dangerous organization of hardened senior Qaeda operatives that Ayman al-Zawahri, Al Qaeda’s leader, sent to Syria to plot attacks against the West.

The Khorasan Group was effectively wiped out by a series of American airstrikes a few years ago. But with as many as 2,000 fighters, including seasoned leaders from Jordan and Egypt, the successor Hurras al-Din group is much larger and is operating in areas where Russian air defenses largely shield them from American airstrikes and the persistent stare of American surveillance planes. Moscow dispatched military aid and advisers to Syria in late 2015 to support the beleaguered government of President Bashar al-Assad.

Hurras al-Din is considered so dangerous that the Pentagon in at least one instance took the unusual step of using a special hotline with Russian commanders in Syria to allow the American military to conduct uncontested airstrikes against Qaeda leaders and training camps in Aleppo and Idlib provinces in June and August. Those were rare attacks west of the unofficial dividing line between American forces to the east of the Euphrates River, and Russian and Syrian government troops west of the river.

“Al Qaeda has been strategic and patient over the past several years,” Nathan A. Sales, the State Department’s counterterrorism coordinator, said last month about the terrorist group and its affiliates. “It let ISIS absorb the brunt of the world’s counterterrorism efforts while patiently reconstituting itself.”

Pieter-Jaap Aalbersberg, the Dutch counterterrorism coordinator, added in an interview: “There is still a general threat out of Al Qaeda, slowly building.”

Qaeda operatives have moved in and out of Syria for years. In 2013, Mr. Zawahri dispatched senior jihadists to bolster the Qaeda affiliate in Syria, then known as the Nusra Front. A year later, Mr. Zawahri sent to Syria a shadowy Qaeda cell called Khorasan that American officials said has been plotting attacks against the West.

Idlib province, whose population has ballooned to more than three million people during Syria’s civil war, contains a witch’s brew of violent Islamic extremist groups, dominated by the larger Qaeda-linked organization Hayat Tahrir al-Sham, formerly the Nusra Front. Syrian military forces, backed by Iranian and Russian firepower, have targeted the group in a four-month air and ground offensive that has driven hundreds of thousands of Syrian civilians, some displaced from other parts of the country, toward Turkey’s closed-off border. A fragile cease-fire brokered in late August has been holding despite some violations.

Hayat Tahrir al-Sham has between 12,000 and 15,000 fighters, and has centered its agenda on combating the government of Mr. al-Assad, with no interest in conducting attacks abroad, according to a recent United Nations assessment.

“Hurras al-Din,” the assessment said, “is believed to have between 1,500 and 2,000 fighters, half of whom are foreign terrorist fighters, a much higher proportion than in the case of” Hayat Tahir al-Sham. Hurras al-Din also has a much more international focus, the United Nations assessment concluded.

“This is an opportunity Al Qaeda can use to put them back on the map,” said Colin P. Clarke, a senior fellow at the Soufan Center, a research organization for global security issues, and an author of a recent article in Foreign Policy about Al Qaeda’s resurgence.

While the two groups share a common lineage and ideology, the policy differences have stirred mutual distrust, and analysts say the two groups continue to spy on each other.

Moreover, some analysts question just how much of a threat Hurras al-Din poses to the West given its internecine battles with Hayat Tahir al-Sham, and the fact that its fighters are largely bottled up in Idlib and Aleppo, with Turkish troops deployed along the border to the north and Russian and Syrian government forces from the south.

“Certainly on the individual level, there are people in Hurras al-Din who are thinking about international ambitions,” Edmund Fitton-Brown, a top U.N. counterterrorism official who coordinated the U.N.’s assessment, said in a recent interview with West Point’s Combating Terrorism Center. “I wonder whether Zawahri really sees this as the most promising place to have a dedicated international terrorist group.”

American military, intelligence and counterterrorism officials acknowledge these limitations but express concern that with freedom to maneuver and plan, Hurras al-Din has both the intent and ability to carry out attacks against the West, including against Americans and American interests.

Even so, several of the officials said they were not aware of any specific plots in the works.

The military’s secretive Joint Special Operations Command has seized on intelligence gathered over time to strike Hurras al-Din fighters and leaders. On June 30, the military said it carried out an air attack on a training facility near Aleppo province. “This operation targeted AQ-S operatives responsible for plotting external attacks threatening U.S. citizens, our partners, and innocent civilians,” the Pentagon’s Central Command said in a statement, referring to Al Qaeda in Syria.

Then, on Aug. 31, the military said it conducted an airstrike against an Al Qaeda leadership facility north of Idlib. “Northwest Syria remains a safe haven where AQ-S leaders actively coordinate terrorist activities throughout the region and in the West,” the military said in a statement.

The Pentagon publicly does not distinguish between Hurras al-Din and Hayat Tahrir al-Sham, calling them both Al Qaeda in Syria, but American analysts privately say Hurras al-Din poses the larger threat to the West and are the militants being targeted.

The Trump administration has also stepped up diplomatic and intelligence-gathering efforts against Hurras al-Din. This month, the State Department designated Hurras al-Din as a terrorist organization, and offered a reward of up to $5 million each for information on three of the group’s leaders who “have been active in Al Qaeda for years and remain loyal” to Mr. Zawahri.

The State Department and the United Nations have presented descriptions of the three leaders, and the following descriptions are based on those assessments.

Hurras al-Din initially wanted to present a Syrian identity, so a Syrian national, Faruq al-Suri, also known as Samir Hijazi and Abu Hammam al-Shami, was appointed as its overall commander, according to State Department and United Nations assessments. “He fought in Afghanistan in the 1990s,” according to the State Department assessment, “and trained Qaeda fighters in Iraq, among other activities.” Mr. Hijazi had previously been reported killed, but reports differed on when and how he might have died.

A second leader, Abu Abd al-Karim al-Masri, also known as Karim, is an Egyptian national. In 2018, Mr. al-Masri was a member of Hurras al-Din’s leadership team and was a mediator between the group and the Nusra Front.

The third official, Sami al-Uraydi, also known as Abu Mahmud al-Shami, is a Jordanian national. “He previously was involved in terrorist plots against the United States and Israel,” the State Department assessment said.

Hurras al-Din’s “foreign terrorist ranks also include fighters from Central Asia and Morocco,” according to the United Nations assessment.