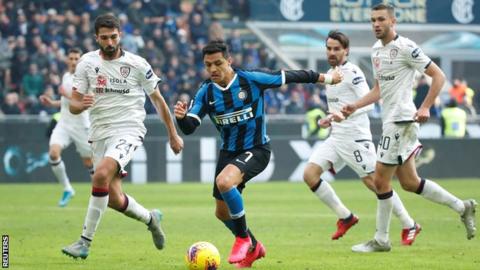 Alexis Sanchez Will Return and Prove You All Wrong – Solskjaer

This post was originally published on this site Alexis Sanchez will return from a loan spell in Italy and make a success of his...

Alexis Sanchez will return from a loan spell in Italy and make a success of his Manchester United career, says the club’s manager Ole Gunnar Solskjaer.

Chile forward Sanchez, 31, is set to return to United in the summer after a season with Inter Milan.

He left Old Trafford having scored five times in 45 games following a move from Arsenal in January 2018.

“Alexis will come back in the summer and prove you all wrong,” said Solskjaer.

Sanchez, United’s highest earner on about £400,000 a week, has said he doesn’t “regret going there” despite struggling to make an impact.

Injuries have hampered his appearances at Inter, meaning he has played just seven times for the Serie A side this season and scored one goal.

Meanwhile, with United’s attempt to sign Sporting Lisbon midfielder Bruno Fernandes this month stalling over the fee, Solskjaer has said doing deals in January is difficult.

“We’ve got players here we’re working hard to get back as well and if there is something out there, then the club are pursuing that and looking at it,” he said.

“Of course it is a difficult window. It always has been. The clubs don’t want to lose their best players.

“I can’t remember how many good ones we’ve brought in in January. Henrik (Larsson) was good, Nemanja (Vidic) and Patrice (Evra) were two good ones.”

United play at Manchester City in the second leg of their Carabao Cup semi-final on Wednesday as they bid to overturn a 3-1 deficit.

“It has to be a perfect performance to win with two goals against such a good team away from home,” said Solskjaer.

“For us it’s not about away goals, we just need to score two more than them.

“If we concede two we need to score four so it would be good not to concede first because that makes it less difficult.”