WASHINGTON — Afghanistan’s security forces are not yet able to deal with violence in the country on their own, the top American military officer... 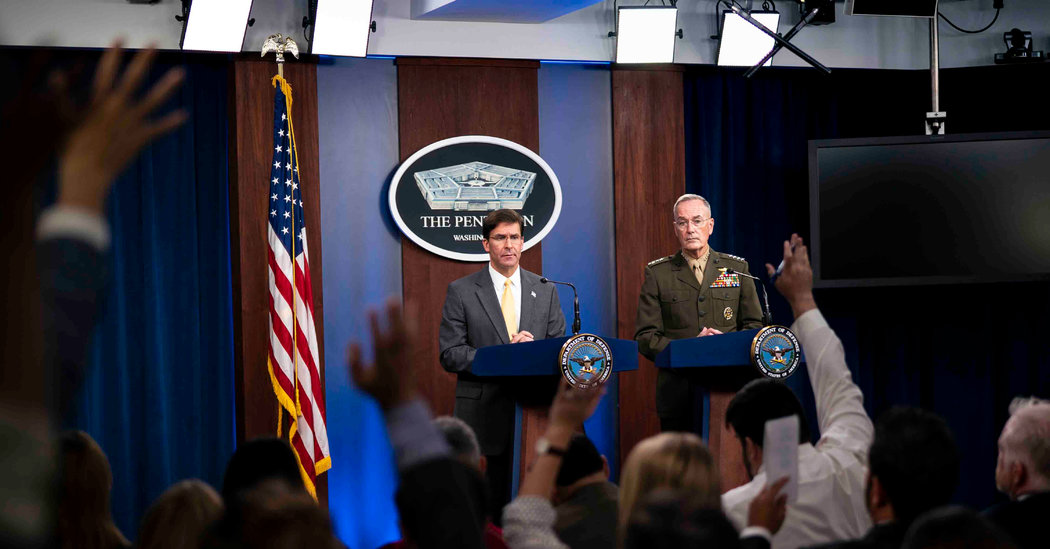 WASHINGTON — Afghanistan’s security forces are not yet able to deal with violence in the country on their own, the top American military officer said Wednesday, laying bare one of the biggest challenges facing administration officials as they try to hammer out a peace agreement with the Taliban that could lead to the withdrawal of American troops.

During a rare news conference at the Pentagon, Gen. Joseph F. Dunford Jr., the chairman of the Joint Chiefs of Staff, said he was not ready to use terms like “withdrawal” when discussing the American troop presence in Afghanistan at this point in the peace negotiations.

“Right now, it’s our judgment that the Afghans need support to deal with the level of violence today,” General Dunford said. “If an agreement happens, that could change.”

But he noted: “I’m not using the ‘withdrawal’ word right now. I’m using ‘We’re going to make sure that Afghanistan is not a sanctuary, and we’re going to try to have an effort to bring peace and stability to Afghanistan.’”

The general said that he had “long known that what’s going to be required is a negotiated peace settlement.” But that included a caution, as General Dunford indicated that some wariness existed at the Pentagon that the peace negotiations might lead to a pullout of the 14,000 American troops there before Afghanistan’s own security forces could succeed without American help.

In recent months, the American military has been taking a more aggressive role in the Afghan conflict. That has led to a higher death toll among American troops this year — 14 so far in 2019, after 13 last year and 11 in 2017. Last week, two American soldiers from a Special Forces unit were killed carrying out an operation in the restive province of Faryab in the north.

Afghan forces, for their part, are being killed at a rate of around two dozen a day.

Mark T. Esper, President Trump’s new secretary of defense, appeared alongside General Dunford at the news conference. It was the first such televised news conference by a defense secretary at the Pentagon in a year; the last one was held in August 2018 by Jim Mattis, who resigned in December.

Building workers were sprucing up the press briefing room on Tuesday, and Mr. Esper began the news conference by promising that he would resume the sessions, which had all but disappeared after the turmoil of Mr. Mattis’s resignation and the implosion of the nomination of Patrick M. Shanahan, initially selected to succeed Mr. Mattis.

Mr. Esper and General Dunford addressed a range of matters, including Yemen and Syria. But Afghanistan was the topic that they kept returning to, as reporters sought clarity on how, and how soon, the United States might end the longest war in the country’s history.

After eight rounds of talks in Doha, Qatar, the United States and the Taliban have inched closer to a deal that would include a timeline for the withdrawal of American forces, coupled with an agreement by the Taliban to sit down with other Afghans to chart the country’s future.

While the United States military has appeared to want to maintain some sort of a residual counterterrorism force in the country that can work to prevent Afghanistan from again becoming a terrorist haven, the Taliban have repeatedly said that they would not accept anything less than a schedule for full withdrawal. At the same time, Afghan government officials have deep concerns that they are being left out of the process, and could be vulnerable once the United States strikes a peace deal with the Taliban.

General Dunford said he had tried to keep his Afghan counterparts informed on developments. “The one thing I’m sure about in the future is our posture is going to adjust,” he said.