Afghan men comfort each other as they mourn during the funeral of their relatives after a suicide bomb blast at a wedding in Kabul... 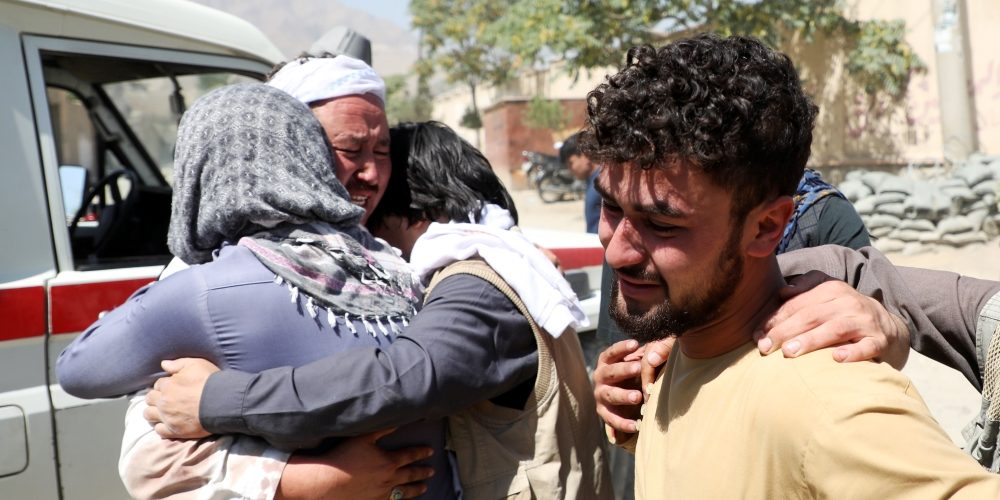 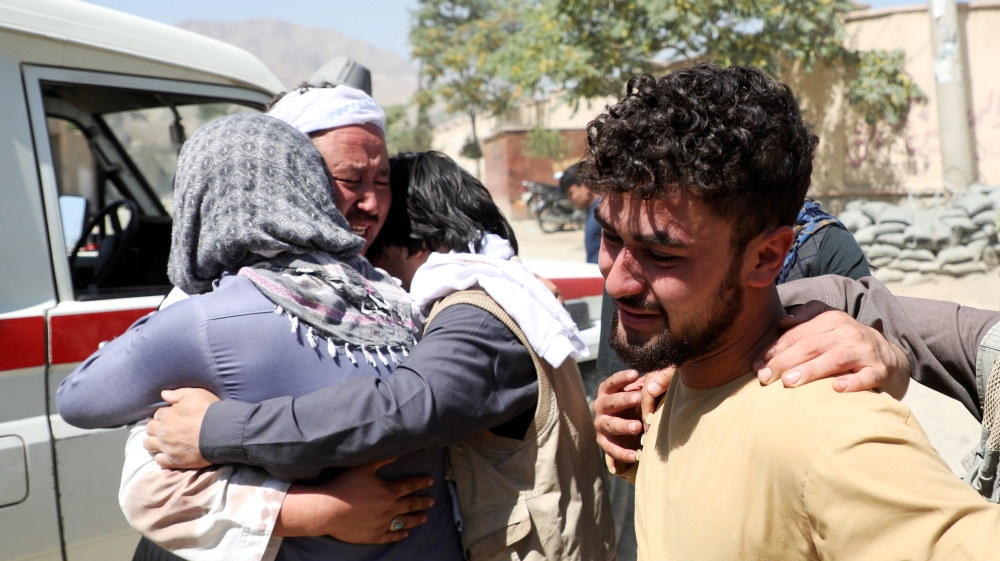 Afghanistan’s President Ashraf Ghani has vowed to eliminate all safe havens of the Islamic State of Iraq and the Levant (ISIL, also known as ISIS) as the country marks a subdued centennial Independence Day following a horrific wedding attack in the capital on Saturday.

Ghani’s comments on Monday came as Afghanistan mourns the death of at least 63 people in the suicide bombing at a wedding reception for a young couple from the minority Shia Hazara community in western Kabul.

At least 182 others were wounded in the attack, with women and children among the casualties.

“We will take revenge for every civilian drop of blood,” Ghani declared.

“Our struggle will continue against [ISIL], we will take revenge and will root them out.”

He urged the international community to join those efforts.

The latest attack came as the Taliban and the United States are trying to negotiate an agreement on the withdrawal of US forces in exchange for a Taliban commitment on security and peace talks with Afghanistan’s US-backed government.

The Taliban denied involvement in the attack and condemned the blast. However, President Ghani said the group “cannot absolve themselves of blame, for they provide [a] platform for terrorists”.

Taliban cannot absolve themselves of blame, for they provide platform for terrorists. Today is the day of mourning, hence #StateBuilder have cancelled today’s gathering at the Loya Jirga tent.

The suicide bomber detonated his explosives in the middle of a dancing crowd inside the wedding hall. The bride and groom survived the attack and in an emotional interview with local broadcaster TOLOnews, the distraught groom, Mirwais Alani, said their lives were devastated within seconds.

As families buried their relatives, celebrations for Monday’s 100 anniversary of Afghanistan’s independence from Britain were postponed out of respect for the blast victims, the president’s office said.

Al Jazeera’s Charlotte Bellis, reporting from Kabul, said the main event at the Darulaman Palace, which was heavily damaged during the civil war, has been cancelled.

“President Ghani had planned to celebrate how far Afghanistan had come to reopening this palace and there were going to be fireworks and a concert and it was going to be on national television,” she said.

“In light of the attack on Saturday, they have decided not to go ahead with that.”

On Monday, Ghani also asserted that safe havens for armed groups are provided across the border in Pakistan, whose intelligence service has long been accused of supporting the Taliban.

The ISIL claim of the wedding attack said it was carried out by a Pakistani fighter seeking martyrdom.

Ghani called on people in Pakistan “who very much want peace” to help identify the ISIL safe havens there.

The latest violence comes against the backdrop of talks between the US and the Taliban, which have been holding regular meetings in Qatar since October to try to end the 18-year conflict.

A sharply worded Taliban statement questioned why the US failed to identify the attackers in advance.

Another Taliban statement marking the independence day said to “leave Afghanistan to the Afghans”.

More than 32,000 civilians in Afghanistan have been killed in the past decade, the United Nations said earlier this year.

More children were killed last year – 927 –  than in any other over the past decade by all actors, the UN said.