Adding Iran's Revolutionary Guard to US Terror List is Provocative

Members of Iran’s Revolutionary Guard Corps march during a parade in Tehran. (AFP/ File) The decision to label the IRGC as a terrorist organisation... 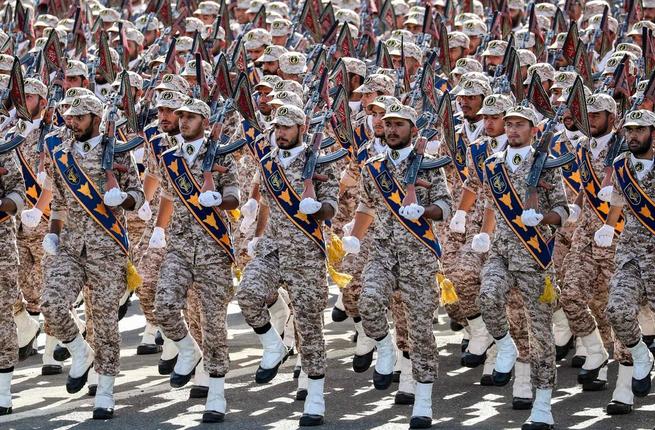 The decision to label the IRGC as a terrorist organisation is unnecessarily provocative from the Trump administration.

Although the timing was probably linked to the Israeli elections, the long-term intentions seem to be oriented around the Trump administration’s efforts to make it far more challenging for future US administrations to engage the Islamic Republic diplomatically. In the near-term, the likely outcomes will entail new dynamics whereby the risk of a military confrontation between the US and Iran increases.

The idea of designating the IRGC as a terrorist organisation is not new. It was pushed in 2007 by the George W Bush administration, who took a similar view to Iran as the Trump administration. Yet, as then-Senator Jim Webb warned, the designation would have constituted then-Vice President “Dick Cheney’s fondest pipe dream” because it would have been “read as tantamount to a declaration of war.”

For all the chest-thumping, it is doubtful that the move will have much impact on Tehran’s policies, both internal and external. Put simply, the US Treasury has already sanctioned the IRGC quite heavily, so this move, while provocative, is unlikely to pressure Iran into caving into Washington’s demands.

Ultimately, it appears that beyond potential (American and Israeli) domestic political factors in play, the Trump administration’s gains from this designation will mainly be symbolic, with no tangible benefits to gain in terms of moderating Iran’s most malign conduct. It does not seem that this decision will impose much further harm on the Iranian economy given that extent to which the US has already sanctioned IRGC-linked/owned/operated entities.

None of this is to say that the region is unlikely to feel much heat now that the Trump administration made this decision, nor that the US is not taking significant risks by making this designation. To be sure, this move against the IRGC increases the possibility of kinetic confrontation between the US military and IRGC-related entities in the region, subjecting the Middle East and US interests in the region to grave dangers.

Friction will probably intensify most in Arab countries where there is strong American and Iranian influence, chiefly Iraq. Since Trump entered the Oval Office, American-Iraqi relations have endured countless headaches as Baghdad has been left with few good options as the White House pursues its “maximum pressure” agenda. For Iraqi officials seeking to strategise ways to maintain healthy and balanced ties with both Washington and Tehran, the Trump administration’s IRGC terrorist designation will complicate bilateral affairs further.

Pressuring Baghdad into choosing between the US and Iran would leave Iraq in a worse state considering how much the country depends on Iran in terms of trade, defence, and energy. Indeed, Iraq’s central government heavily depends on IRGC-backed Shia militias for security and anti-Islamic State (Daesh) operations.

Within this context, the US should consider the possibility of Iraq siding with its neighbour in the event of a military confrontation between US forces and Iranian-backed units in Iraq. To that point, Iraq’s pro-Iranian factions will feel increasingly emboldened when demanding expulsion of American troops from their country.

In Syria, America could find itself becoming more bogged down in the conflict if its military targets IRGC forces in line with how the US wages strikes against other entities in the country placed on the FTO list.

The risk of a major escalation in hostilities between the US and Iran being played out militarily in Syria would dramatically diminish the prospects for the war-torn Arab country normalising and stabilising following the Damascus regime’s “victory” over rebels, opposition and Daesh.

Perhaps one reason to be hopeful that Trump will be keen to avoid such a scenario is the fact that his “isolationist” base is mostly in agreement, and passionately so, about the need to prevent a long-term US military adventure in Syria.

Abundantly clear to all observers of the Tehran-Washington relationship is that the Trump administration has gone to pains to dismantle viable channels for diplomacy between both capitals.

Consequently, if Iran responds militarily to the designation, the risks are much higher of a tit-for-tat cycle escalating beyond the control of either side or any actor in the region, such as Oman, which has served as a diplomatic bridge between the Islamic Republic and the US on past occasions.

Undeniably, for officials in America’s defence and intelligence communities, all these risks are serious and real. Most likely, such understandings of the dangers of the administration’s latest move to intensify “maximum pressure” against Iran explain why prominent and high-ranking members of the US military have voiced grave concerns over this designation.

The decision has been criticised by scores of analysts who question the wisdom of beginning to designate institutions like the IRGC—that operate within foreign governments’ state apparatuses—as an FTO, given that terrorist organisations are traditionally understood as non-state actors.

Where Trump’s “maximum pressure” agenda is heading is worth asking. Is it sound to conclude that the Islamic Republic will either capitulate to Washington’s demands or collapse if the US administration’s anti-Iranian policies in the forms of threats and economic sanctions continue?

According to information that the National Security Archive recently revealed, Washington’s allies in Europe and the Arabian Peninsula have issued warnings of the risks of the US pursuing regime change in Tehran or stepping up its efforts to isolate the Islamic Republic. As one official in the United Arab Emirates (UAE) put it, “If Iran were pushed over the brink … the aftermath could pose risks for the entire region.”

Further, if facing a major threat from the US, Iran “might try to retaliate.” The Emirati official also stated that the “ensuing instability” resulting from American efforts to oust Iran’s regime “will create serious problems for the region.”

Former French President Jacque Chirac, according to a State Department cable, said that “It would be very dangerous to isolate Iran totally…. experience proves that the US embargo benefits only the extremists.”

The US administration’s approach to dealing with Iran is particularly dangerous given the history of Iranians refusing to capitulate despite extreme circumstances, best exemplified by the Iran-Iraq war of the 1980s. By trying to pressure Iran into humiliatingly surrendering to the Trump administration’s set of demands, the White House is intent on disregarding the potential benefits that could come from relying on some measure of diplomacy to entice Tehran into changing its regional behaviour and domestic politics.

Without a “carrots and sticks” approach, and only a “no carrots and only sticks” strategy, the Trump administration is determined to force Iran into capitulation.

Undoubtedly, the consequences of such US strategies will likely entail a future political environment in Tehran that provides fertile ground for hardliners like Mahmoud Ahmadinejad to ascend, not figures such as Hassan Rouhani who argue that diplomatic engagement with the West will pay off for Iran.

A future US administration that possibly seeks to chart a new course in US-Iran relations by bringing back diplomacy will have a harder time doing so because of this IRGC terrorist designation.