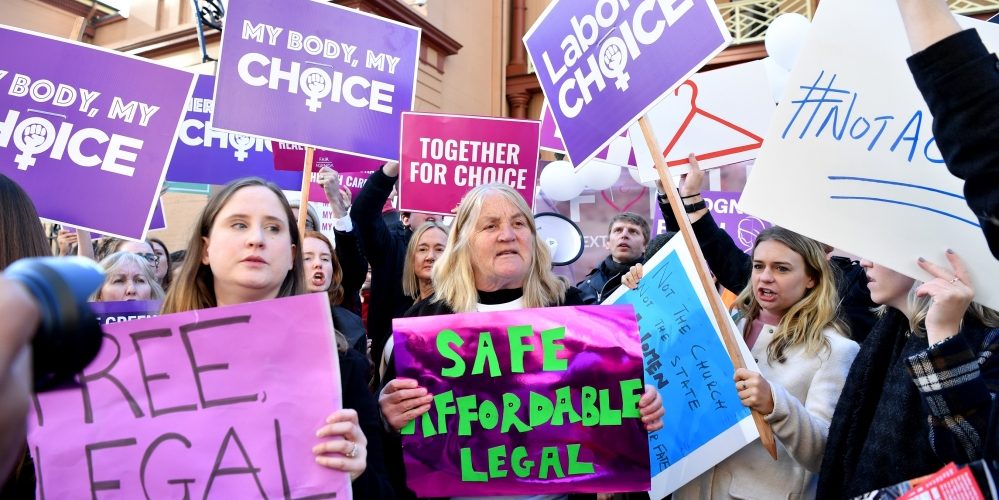 Canberra, Australia – Debate began on Tuesday in the upper house of the state of New South Wales (NSW) to decriminalise abortion, but what was expected to be a straightforward legislative process, has triggered a furious backlash from conservative politicians and religious groups.

The Reproductive Health Care Act 2019, which seeks to bring the state into line with the rest of Australia, would allow abortion up to 22 weeks. It was passed by the state lower house in August, with 59 in favour and 31 against.

The bill’s backers say the change will protect women and reduce some of the stigma associated with the procedure, but the legislation has attracted intense debate and national attention.

Barnaby Joyce, a former deputy prime minister, claimed the bill ignored the rights of unborn children, and at an anti-abortion rally over the weekend, former prime minister Tony Abbott alleged the move to decriminalise would enable “infanticide on demand”.

NSW, which includes Sydney and Melbourne, made abortion a crime in 1900.

Terminations have existed in a grey legal area – allowed for health reasons or even economic ones, but still carrying a risk of prosecution.

“We need to take abortion out of the Crimes Act and give women autonomy over their decisions,” Family Planning NSW Medical Director, Dr Deborah Bateson told Al Jazeera.

A survey released this month by Pro-Choice NSW showed that more than 77 percent of the state’s residents support decriminalisation.

Jen, who prefers not to reveal her full identity, had an abortion in Sydney in 2016 when she fell pregnant just five months after giving birth while suffering from “near-crippling post-natal depression”.

She told Al Jazeera that she searched for abortion services online and had no idea whether the medical centre was legitimate or not when she called to make an appointment.

“The days between the phone call and the abortion were very tense,” she said. 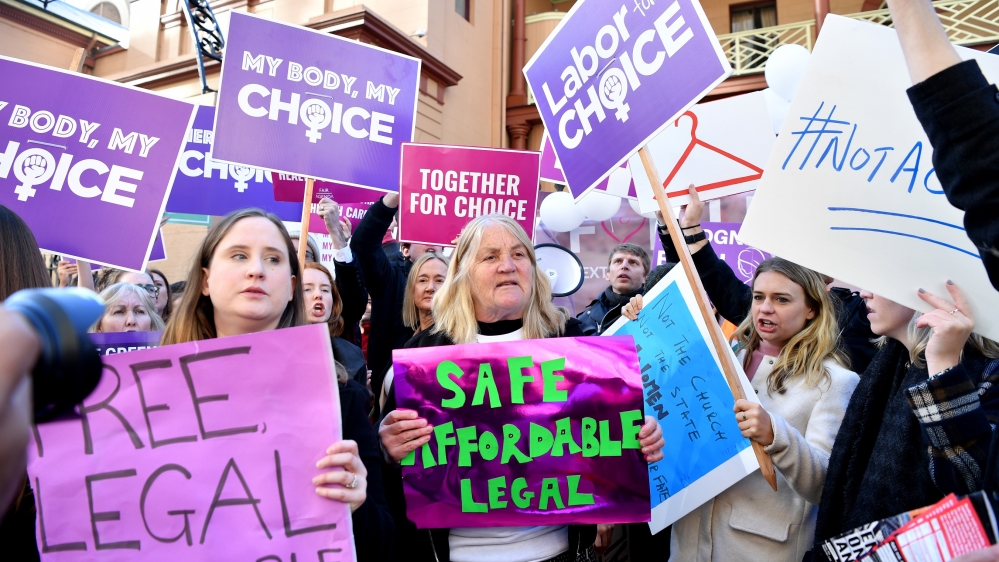 With few exceptions, abortion is illegal in Sydney and the rest of New South Wales since 1900 [File: Joel Carrett/EPA]

“Why couldn’t I call a proper doctor in a proper office? Why all the cloak and dagger bulls**t? Was he even a real doctor? How would I know? All I knew was, I couldn’t have that baby.”

Fortunately, the clinic turned out to be legitimate and there were no complications.

Jen said she does not have any regrets, but that she was frustrated that the stigma around obtaining abortions in NSW left her feeling unsafe.

While abortion in Australia has not been as divisive issue as it has been in the United States, conservative and religious groups have stepped up their campaigns, often adopting methods pioneered by the US anti-abortion activists, who prefer to call themselves pro-life advocates.

Amid picketing of health centres offering abortion services, five states in Australia have now introduced safe access zones at clinics, so women do not have to run the gauntlet of anti-abortion protesters.

NSW’s upper house, which delayed its debate on the bill for a month, is attempting to introduce a number of amendments including a reduction in the time limit from 22 weeks, and clauses covering gender selection.

Any amendments will mean the legislation will need to go back to the lower house for debate and approval.

But medical experts and social workers say decriminalisation is necessary because of the risk of prosecution for women and doctors under existing legislation.

Twelve people have been prosecuted in NSW for abortion offences since 1994, of whom four were found guilty.

The most recent case was in 2017, when a mother of five children under the age of nine was found guilty of self-administering abortion drugs when she was 26 weeks pregnant.

Most states in Australia took steps to improve laws around abortion in the 1990s or 2000s.

Experts say the result has been better care for women accessing abortion services whether they are prescribed drugs for a medical termination, which can take place until the ninth week of pregnancy, or a surgical one, which can be performed until 24 weeks.

It is an issue that is particularly important for women in rural areas.

In the town of Wagga Wagga, NSW’s largest inland city, which serves communities for hundreds of kilometres around, only three medical facilities provide abortions, agreeing to the procedure only if they determine the pregnant woman’s life, physical health, or mental health is in “serious danger” if she continues the pregnancy.

Even then, they can only offer a medical termination. Any woman who needs a surgical abortion has to travel hundreds of kilometres.

“In urban centres, if services aren’t available in one place, people think ‘Oh well, you can go to the next town’,” Julie Mecham of Wagga Wagga Women’s Health Centre told Al Jazeera.

“It doesn’t work like that for women here. It’s not that easy. There are a huge number of barriers to accessing services.”

Until earlier this year, women from Wagga Wagga had to travel 125km for a surgical abortion, but that clinic stopped providing terminations to women from outside its local area. 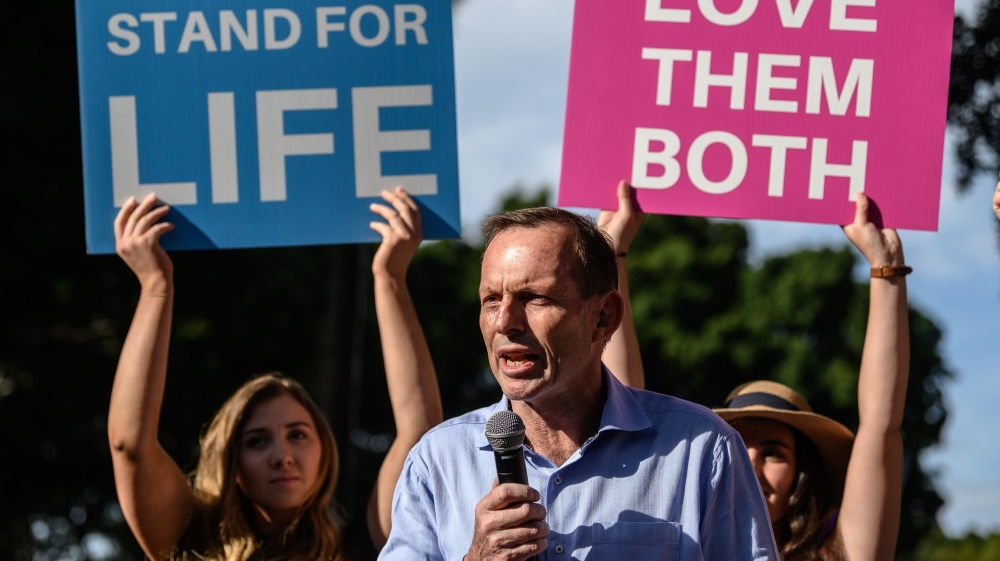 Now, the women of Wagga Wagga must make a round-trip of some 535km to Canberra, Australia’s capital city, for the operation.

Ten years ago, Karen McKinnon was working as a family support worker for pregnant and drug-using women in Wollongong, 90 minutes south of Sydney. She assisted two women to get an abortion at a medical clinic.

“The main barriers for them were the cost and lack of social support,” McKinnon said.

“These were vulnerable and disenfranchised women who needed empathy, acceptance, and non-judgemental support,” McKinnon said.

While it might take some time for the stigma associated with abortion to go away, changing the law will at least mean women in NSW no longer have to run the risk of unsafe abortions or criminal prosecution.

It will also ensure women are able to get the care they need in what can be one of the most difficult decisions they ever make.

“It’s important that we take out that fear of being stigmatised and take away barriers to access.”