A peek inside Changi Airport's Jewel finds magical gardens, the world's tallest waterfall and a mall

Singapore’s Changi Airport has long been touted as the “best airport in the world.” That status becomes even more cemented on April 17, when... 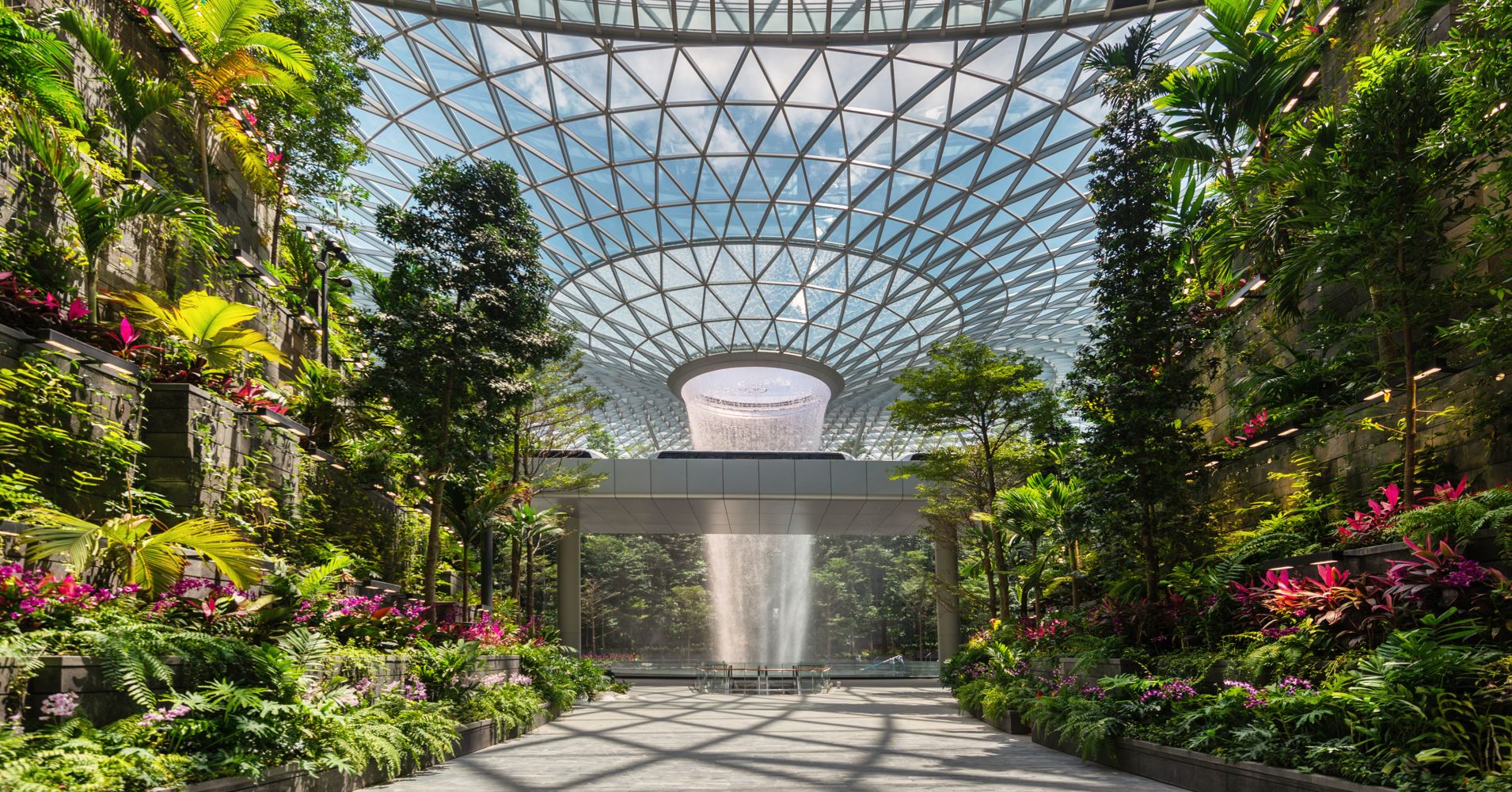 Singapore’s Changi Airport has long been touted as the “best airport in the world.” That status becomes even more cemented on April 17, when it will officially open a dazzling presecurity attraction known as Jewel.

Inside is a lush four-story tiered garden, more than 280 retail and dining outlets, a hotel, a multi-screen IMAX theater and its centerpiece: a 130-foot-tall Rain Vortex, which is the world’s tallest indoor waterfall.

The next phase of the project rolls out in June, when Jewel Changi Airport opens a bundle of added features (many ticketed) to the public, including a 164-foot-long glass-bottomed bridge, nets for bouncing and walking, mazes, topiary sculptures and more.

Housed inside a toroidal, or doughnut-shaped, glass and steel structure designed by noted architect Moshe Safdie, Jewel Changi Airport is adjacent to Terminal 1 and sits on airport real estate that was formerly a parking lot. The striking new structure now covers more than 1.46 million square feet. It has 10 stories — five above ground and five below — and was built on budget, at a cost of $1.7 billion Singapore dollars (US$1.25 billion).

“Not only will Jewel augment Singapore Changi Airport’s offerings,” said Jewel CEO Hung Jean during a preview of the space, “it will also strengthen Singapore as an attractive tourist destination.”

At ground level, the water flows into a giant acrylic funnel that creates an inverted waterfall on two below-ground levels. At night, the waterfall becomes the backdrop, or canvas, for a first-of-its kind, 360-degree projected light-and-sound-show.

The waterfall is not just a feature in the building, said Peter Kopik, WET design director. “It’s a continuation of the building. It’s like the roof is pouring in and the building is getting completed in a liquid form.”

WET is the company behind the Fountains of Bellagio in Las Vegas.

Singapore is known as a “City in a Garden” and Changi Airport is already well-known for its grand floral installations and its butterfly, sunflower, cactus and other gardens.

Jewel builds on that theme with the four-story, 227,000-square-foot Forest Valley, featuring more than 900 trees and palms and more than 100,000 shrubs sourced from around the world.

The idea for Jewel’s indoor forest and record-breaking waterfall developed in response to Changi Airport’s request for proposals to build a facility with retail and dining, a host of travel-related amenities and some sort of attraction.

“Was that attraction going to be dinosaurs, an aquarium, mummies?” said Safdie. “We said hold on, those are spaces you visit once. We need something, universal, that will last and will appeal to all generations. And that’s how we came to the idea of a mythical garden.”

When Jewel’s upper level Canopy Park opens in June, it will feature mirrored mazes and themed gardens, including a walkway lined by topiary and floral animal sculptures depicting birds, monkeys, elephants and other animals created by Jewel’s team of horticulturists. Grand floral installations will celebrate holidays and change with the seasons.

Jewel’s Canopy Park includes the 164-foot-long Canopy Bridge, which has a glass bottom and is suspended 75 feet above Jewel’s main floor. Those brave enough to venture out onto the bridge will be rewarded with great views of the Rain Vortex and the forest. Some of the park’s suspended nets will let youngsters and adults bounce around, while others will let visitors walk high-above the ground.

In addition to global brands such as Adidas, Coach and Levi’s, Jewel’s many shopping venues include a good number of new-to-market shops, a Pokemon Center and plenty of Singapore brands, such as In Good Company (clothing) and Supermama (design and crafts items). Gift by Changi Airport carries many specially made Changi Airport-themed items, including the airport’s signature orchid, a spice- and plant-sourced scent and work by sought-out local artists.

Dining options in Jewel Changi Airport range from fast food to fine dining and include cuisines from Asian to Western. Visitors will find all manner of dishes made with the strong-smelling durian fruit, Singapore’s first Shake Shack and numerous cafes that offer “outdoor” dining with a view of Jewel’s forest and waterfall.

Many passengers have long layovers at Changi Airport or have many hours to wait between hotel check-out time and late-night flights.

In addition to a YotelAIR hotel with 130 cabin-sized short-stay rooms, bonus amenities for travelers at the new Jewel Changi Airport attraction include bag storage facilities and early check-in counters that allow passengers to drop bags and get boarding passes up to 24 hours before a flight. A pay-per-use Changi Lounge is designed to serve the many cruise and ferry passengers who need a place to hang before connecting to flights at Changi Airport.

Disclosure: Harriet Baskas is a freelancer for CNBC. Changi Airport Group and Cathy Pacific covered some of her travel expenses in reporting out this story.