KYOTO (AFP) – A 400-year-old temple in Japan is attempting to hot-wire interest in Buddhism with a robotic priest it believes will change the... 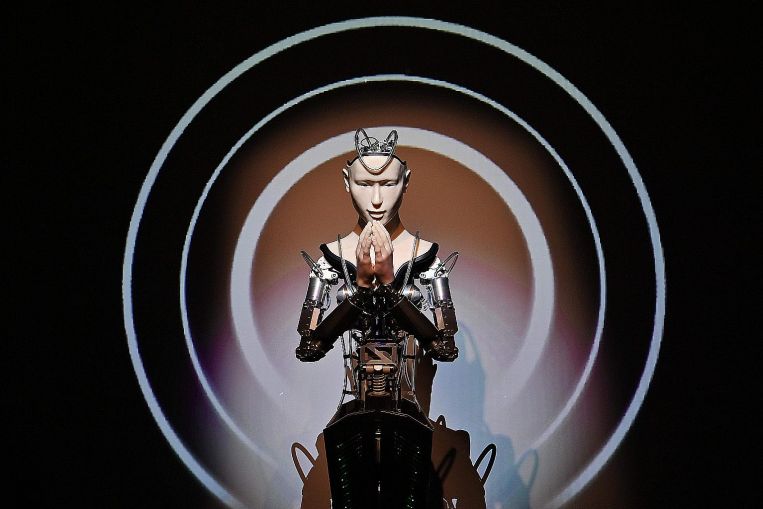 KYOTO (AFP) – A 400-year-old temple in Japan is attempting to hot-wire interest in Buddhism with a robotic priest it believes will change the face of the religion – despite critics comparing the android to “Frankenstein’s monster.”

The android Kannon, based on the Buddhist deity of mercy, preaches sermons at Kodaiji temple in Kyoto, and its human colleagues predict that with artificial intelligence it could one day acquire unlimited wisdom.

“This robot will never die, it will just keep updating itself and evolving,” priest Tensho Goto told AFP.

“That’s the beauty of a robot. It can store knowledge forever and limitlessly. With AI we hope it will grow in wisdom to help people overcome even the most difficult troubles. It’s changing Buddhism,” added Goto.

The adult-sized robot began service earlier this year and is able to move its torso, arms and head.

But only its hands, face and shoulders are covered in silicone to replicate human skin.

Clasping its hands together in prayer and speaking in soothing tones, the rest of the droid’s mechanical parts are clearly visible.

Wiring and blinking lights fill the cranial cavity of its open-top head and snake around its gender-neutral, aluminium body.

Developed at a cost of almost US$1 million ($1.38 million) in a joint project between the Zen temple and renowned robotics professor Hiroshi Ishiguro at Osaka University, the humanoid – called Mindar – teaches about compassion and of the dangers of desire, anger and ego.

“You cling to a sense of selfish ego,” it warns worshippers. “Worldly desires are nothing other than a mind lost at sea.”

“Young people probably think a temple is a place for funerals or weddings,” he said, trying to explain the disconnect with religion.

“It might be difficult to relate to fuddy-duddy priests like me, but hopefully the robot is a fun way to bridge that gap. We want people to see the robot and think about the essence of Buddhism.” Goto insisted, however, that Mindar was no gimmick to boost income from tourists.

“This robot teaches us ways to overcome pain,” he said. “It is here to save anyone who seeks help.”

The pious droid delivers sermons from the Heart Sutras in Japanese, with translations in English and Chinese projected onto a screen for foreign visitors.

“The goal of Buddhism is to ease suffering,” said Goto. “Modern society brings other kinds of stress, but the goal hasn’t really changed for over 2,000 years.”

A recent Osaka University survey showed a wide range of feedback from those who have seen the android at work, with many expressing surprise at how “human” it looked.

“I felt a warmth you wouldn’t feel from a regular machine,” said one of those polled.

“At first it felt a little unnatural, but the android was easy to follow,” replied another temple-goer. “It made me think deeply about right and wrong.”

Others were less convinced, some insisting the robot was too “fake”.

“The sermon felt uncomfortable,” complained one worshipper. “The robot’s expressions felt too engineered.”

Kodaiji temple has also faced criticism – mostly from foreigners – for tampering with the sanctity of religion.

“Westerners have been the most upset by the robot,” said Goto, noting largely positive feedback from Japanese visitors.

“It could be the influence of the Bible, but Westerners have compared it to Frankenstein’s monster,” he added.

“Japanese people don’t possess any prejudices against robots. We were brought up on comics where robots are our friends. Westerners think differently.”

“Obviously a machine doesn’t have a soul,” he said. “But Buddhist faith isn’t about believing in God. It’s about following Buddha’s path, so it doesn’t matter whether it is represented by a machine, a scrap of iron or a tree.”

The temple insists the deity of mercy is able to transform itself at will and that an android is merely the latest incarnation.

“Artificial intelligence has developed to such an extent we thought it logical for the Buddha to transform into a robot,” said Goto. “We hope it will touch people’s hearts and minds.”