If you’re a regular Facebook user, you might have noticed a surge in the number of video ads on the platform. While businesses still...

If you’re a regular Facebook user, you might have noticed a surge in the number of video ads on the platform. While businesses still use photo ads and carousel ads, they’re growing increasingly fond of the video advertising format. And there’s a good reason for that – people love watching videos. In fact, Facebook has an average daily video view of eight billion.

A study by Locowise found that video content managed to reach 13.4% of a Facebook page’s total audience while photo content reached 13.13% of the total audience. Although the difference in reach isn’t much, videos have an impressive lead in engagement rate. The study found that videos engaged 5.49% of the audience reached while the engagement rate for photos was 4.67%.

With the above stats in mind, here are five best practices you should follow if you want to create Facebook video ads that have an impact.

1. Establish the value of your product

Your video should be able to establish the value of your product by demonstrating what it can do for the audience. If you want people to take action after watching your video, make sure it’s not just entertaining. Otherwise, they’re just going to keep scrolling, looking for the next piece of content to consume.

Create videos that showcase exactly what your product is capable of and what problems it can solve. This will give the audience a better idea of how your product can be of value to them.

Adobe Spark, for instance, created Facebook ads using videos created by its users. Since the ad is trying to promote the platform’s video creation feature, showcasing an example of the end result is the perfect solution to demonstrate the types of videos that can be created using Adobe Spark. 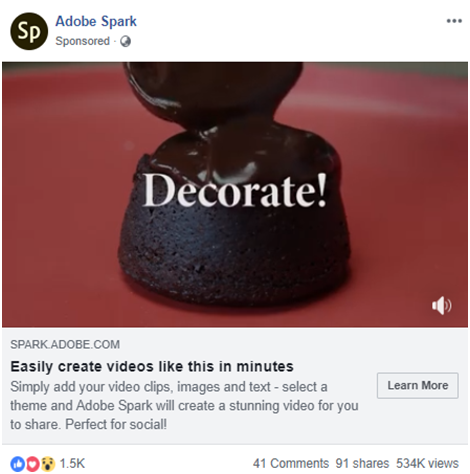 2. Include a teaser summary

Sure, your video may already have a headline and subheading, but that’s not always enough to engage your audience. You will need to include additional context that sets up the video in a compelling and captivating way.

You also can use the space to give additional information about the product that didn’t make it into the video. Or you could even add a short teaser phrase or question that compels people to watch it.

Take for example the following ad from Lensball. They’ve included a summary with a brief explanation of what the product is and ended it with a call to action (CTA) to visit the brand’s site. 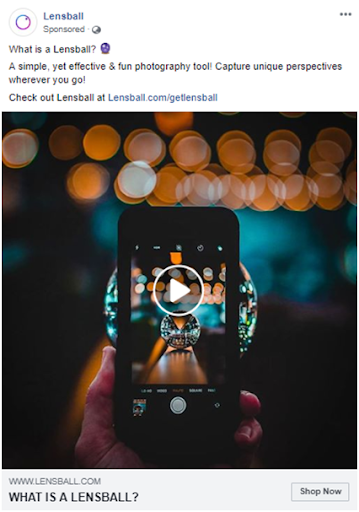 3. Design videos that resonate without sound

A 2016 internal Facebook study found that 80% of people have a negative reaction to the unexpected playing of loud video ads, though through the same research, Facebook also found that 41% of videos were meaningless without sound. And according to Digiday, roughly 85% of video views on the platform happen with no sound. So if you want to create video ads that have an impact, you need to design for sound off first. Fortunately, Facebook gives you the ability to easily add captions to your video ads, including the option to enable automated captions.

The Lacoste Facebook video ad is an excellent example of one that’s designed for sound off. Titled “Timeless,” the ad told a love story spanning decades and showed the characters growing and evolving by displaying an evolution of their style. The only constant was the protagonist’s polo shirt, signifying that it’s a timeless style choice. 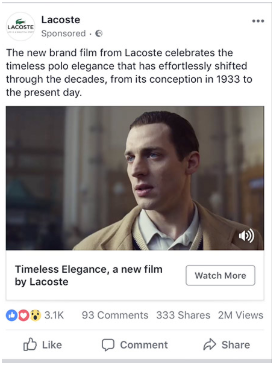 4. Aim to engage in the first 3 seconds

The first three seconds of your Facebook video ads are the most critical. If you can’t immediately intrigue the audience during this period, there’s a good chance they’re not going to watch the rest of the video. According to Facebook, 65% of people who watch the first three seconds of a video will continue watching for at least 10 seconds. And 45% will continue watching for 30 seconds.

For America’s Test Kitchen, switching from still images to animated videos had a significant impact on their lead ads. They ran a test on three different types of motion: animating a recipe, animating a logo and animating a still image of a fried egg. All of these motions were added during the first three seconds of the video.

They found that the bold food image seemed to resonate most with the audience. And the animated version of the fried egg performed much better than the still image. Their leads increased by 45% and they were able to reduce their cost per lead by 31%. 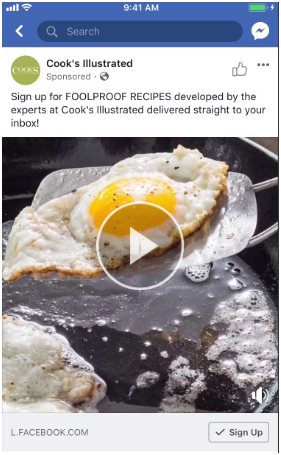 There are three Facebook video ad specs you can use–vertical, square and landscape. If you want your ads to have a bigger impact, you’re going to need either vertical or square videos. This is mainly because a majority of Facebook users access the platform on their smartphones, as opposed to desktops and laptops. And square and vertical formats are more suitable for mobile screens, leading to their success.

Compared to landscape videos, square videos take up 78% more space on a user’s News Feed. This means your ads will be fully on display and easy to see. Aside from that, a study by Animoto found that square and vertical formats outperformed landscape videos in terms of views, engagements and completion rate.

For example, the Jane Goodall Institute decided to run an A/B test using square and landscape videos for their Facebook ad. They spent $50 on each version but  square video proved to be the big winner. The square version recorded twice as many views and three times as many shares as the landscape version. 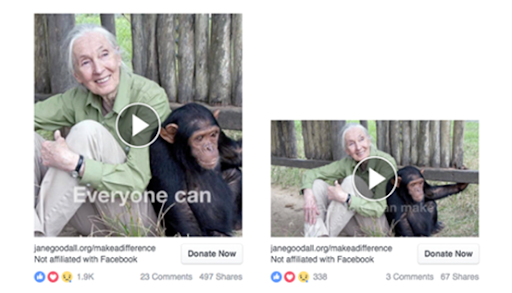 Square and vertical videos look better on mobile, but that doesn’t mean you’ll be sacrificing your ad aesthetics on desktops and laptops. The following screenshot of a vertical MUBI video ad is from a laptop. It looks just as attractive as it would on a smartphone, so you won’t be making any compromises if you switch to square or vertical Facebook video ads. 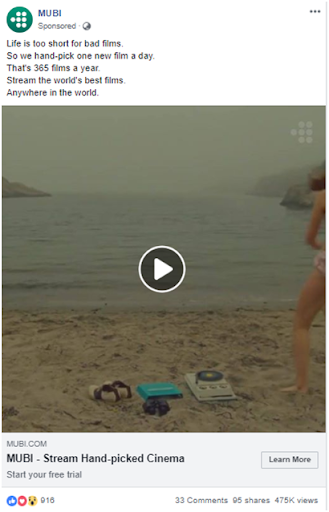 Have you tried any of these best practices to improve your Facebook video ads? Which one’s your favorite? Let us know in the comments below.