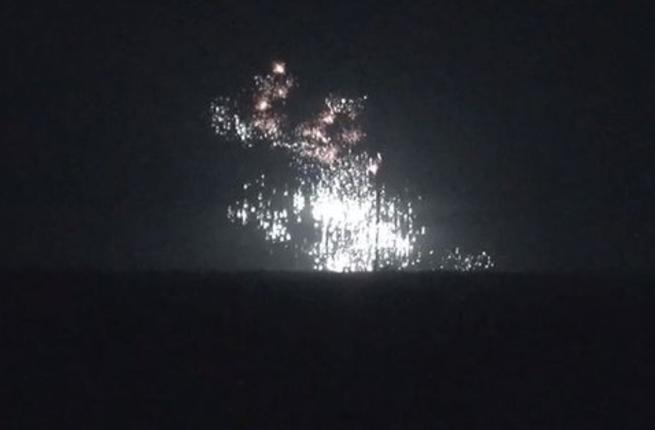 The Bashar al Assad regime on Tuesday attacked southern Idlib with white phosphorus bombs, according to the volunteer rescue agency, the White Helmets.

“The attack was carried out twice. In both of them, some 40 bombs loaded with white phosphorus were dropped,” said Mustafa Haj Yousuf, head of the White Helmets in Idlib, who added that the rebel-held town of Tamanaa was the target. He said his group did not know whether there were casualties.

The use of white phosphorus – evident in footage obtained according to the agency – is forbidden under international law.

When inhaled, phosphorus causes brain and lung damage and can kill.

The area targeted was largely void of civilians due to intensified regime attacks in the region.

The last known use of phosphorus bombs by the Assad regime was in Eastern Ghouta in March 2018.

The alleged phosphorus attack comes as the regime steps up its assault on rebel-held Idlib.

The SOHR said that more than 18 air strikes hit different areas in Idlib in the past 24 hours killing at least two civilians and wounding more than 15.

The intensified fighting in the region has killed at least 124 civilians with more than 260 wounded since the beginning of 2019.

Idlib has been in the hands of rebels for years, even as Assad’s military has taken back other rebel enclaves.

The province is now home to some 3 million people, many of them displaced from other areas held by rebels or the opposition.

Earlier this year HTS (Hayat Tahrir al Sham or Levant Liberation Committee in Arabic) which has historical links to Al Qaeda emerged as the strongest rebel group in the province, squeezing out most other factions after clashes with Turkey-backed opposition fighters.

In September 2018, Turkey and Russia agreed to turn Idlib into a demilitarised zone after a meeting between Turkish President Recep Tayyip Erdogan and his counterpart, Vladimir Putin, in Sochi, Russia.

Ankara and Moscow signed a memorandum of understanding calling for the stabilisation of the situation in Idlib’s de-escalation zone, in which acts of aggression are prohibited.

Syria has been locked in a vicious civil war since early 2011 when the Assad regime cracked down on pro-democracy protests with unexpected ferocity.

Since then, hundreds of thousands of people have been killed and more than 10 million others displaced, according to UN officials.