3,000 ISIS Militants Give up Last Square Mile in Syria

(Shutterstock) Around 3,000 Islamic State members have surrendered from the group’s last square mile of territory in Syria, Kurdish-led forces said on Tuesday, as... 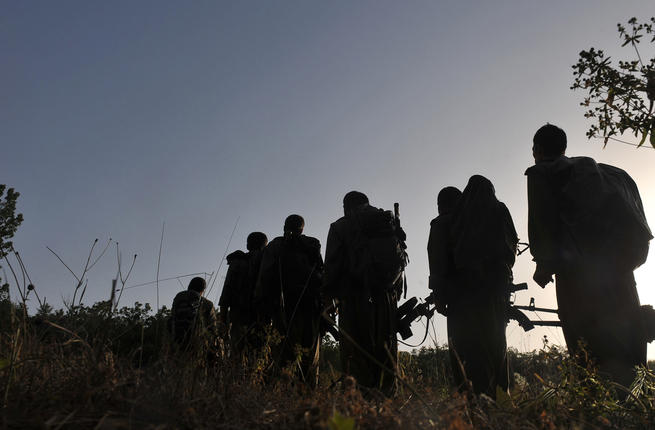 Around 3,000 Islamic State members have surrendered from the group’s last square mile of territory in Syria, Kurdish-led forces said on Tuesday, as air raids and shelling resumed after a brief pause.

A ragged tent encampment in the eastern Syrian village of Baghouz, east of the Euphrates river, is all that remains of IS group’s self-proclaimed “caliphate” declared in 2014. At its height, it controlled a stretch of land in Syria and neighbouring Iraq the size of the United Kingdom.

The US-backed Syrian Democratic Forces (SDF) has been trying to crush holdout IS fighters for weeks but have held back to allow for the mass outpouring of men, women and children from Baghouz.

The SDF renewed its assault Sunday after warning remaining IS fighters their time was up.

Airstrikes and shelling have since battered Baghouz three nights in a row, killing scores of fighters and prompting hundreds of jihadists and their relatives to surrender.

Thousands handed themselves over Tuesday.

“Number of Daesh (IS) members surrendered to us since yesterday evening has risen to 3,000,” Syrian Democratic Forces spokesman Mustefa Bali tweeted in English on Tuesday evening.

Three women and four children of the Yazidi minority were also rescued, he added.

The SDF and the US-led coalition resumed shelling and air strikes on the last IS stronghold Tuesday evening, interrupting a brief lull in fighting that had taken hold during the day to allow for people to surrender.
Sherif, the unit commander, said his force was preparing to storm the jihadist redoubt.

“We will enter with full force and we will be at the forefront” of the advance, said the fighter who has been battling IS for years.

Earlier Tuesday, Ali Cheir, an SDF unit commander, said his force and the coalition were striking the IS enclave at night to flush out jihadists.

“The objective of our advance is to terrorise IS fighters so they surrender, and for the civilians to come out,” said the 27-year-old.

Since December, around 60,000 people have left the last IS redoubt, according to the Britain-based Syrian Observatory for Human Rights, around a tenth of them suspected jihadist fighters.

The SDF is struggling with the intake of displaced civilians as thousands make their way to Kurdish-run camps such as al-Hol.

Around 113 people – two-thirds of them children under five – have died en route to the camp or shortly after arriving since December, the UN’s humanitarian coordination office OCHA says.

The capture of Baghouz would mark the territorial defeat of ISIS but many analysts have warned of a potential resurgence of the militant groupp, with sleeper cells in the northeast.

The jihadists have continued to claim deadly attacks in SDF-held territory in recent months, and the US military has warned of the need to maintain a “vigilant offensive”.

The group released a video late Monday allegedly showing jihadists in Baghouz, quietly defiant in the face of the advancing SDF.

“If we had thousands of kilometres and now we only have some kilometres left, it is said we have lost – but God’s judging standard is different,” said a man named Abu Abdel Adheem, in the video Monday via IS social media channels. “The battles are not over”.